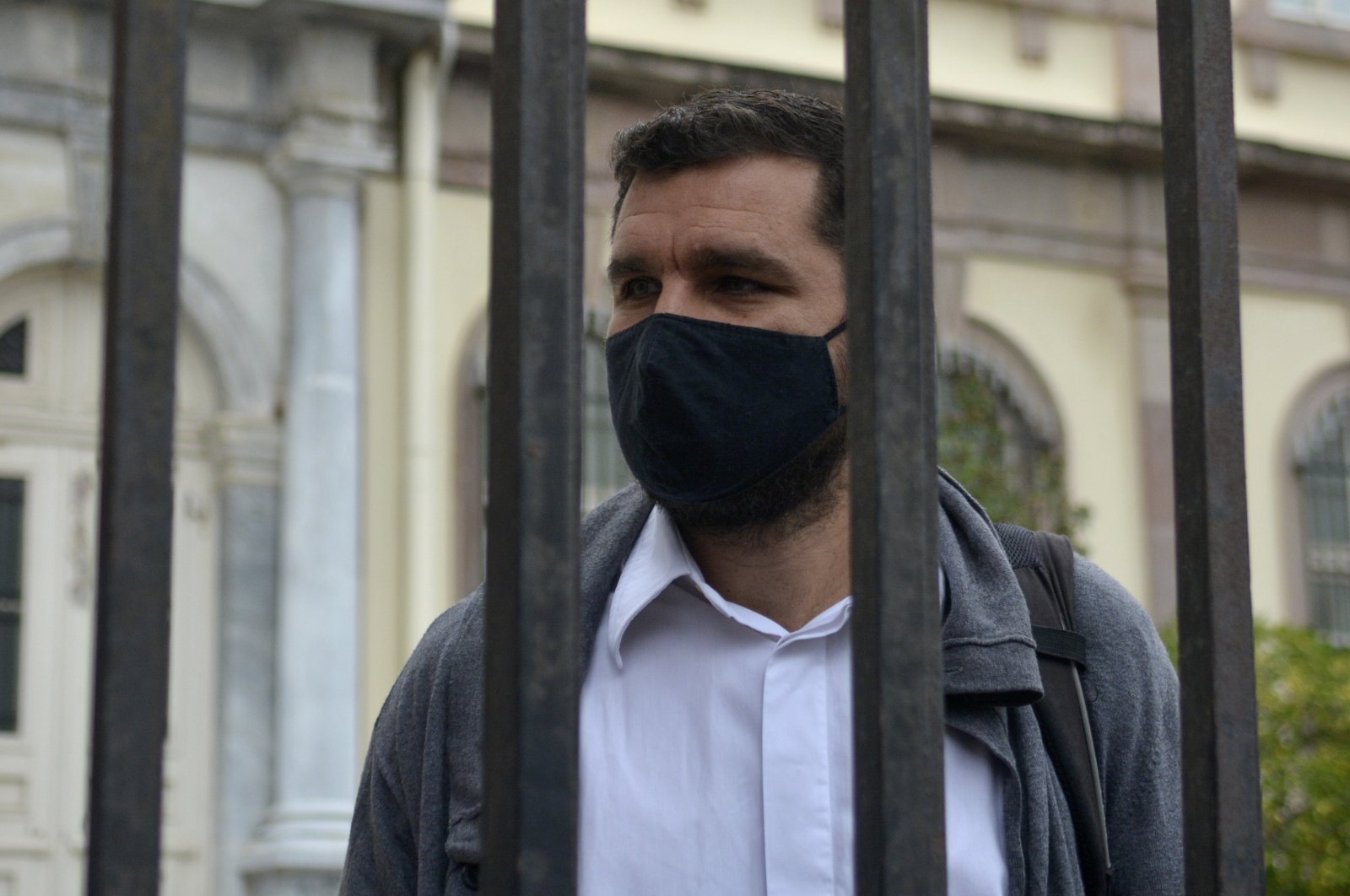 Greek Nasos Karakitsos stands at the yard of a court before his trial in Mytilene port, on the northeastern Aegean island of Lesbos, Greece, Nov. 18, 2021. (AP Photo)
by DAILY SABAH WITH AGENCIES Nov 18, 2021 8:18 pm
RECOMMENDED

Twenty-four humanitarian activists that rescued migrants appeared in court Thursday on the Greek island of Lesbos in a move strongly criticized by rights groups.

Judicial officials said the misdemeanor court on Lesbos declared itself not competent to try the case and the defendants left without restrictions pending the scheduling of a new trial that would involve more senior judges.

The Greek and international volunteers include the Syrian-born competitive swimmer Sara Mardini, whose sister Ysra Mardini was part of the refugee swimming team at the Olympic Games in Rio de Janeiro in 2016 and Tokyo earlier this year. Mardini was not present at Thursday’s hearing.

The defendants, including many who spent several months in pre-trial detention, face a range of charges including misdemeanor counts of espionage-related offenses, illegal access to state communications and assisting criminal activity.

They deny any wrongdoing, maintaining that they simply wanted to help save lives when the island of Lesbos was overwhelmed by refugee and migrant arrivals from nearby Turkey.

“I feel very angry. Because we have to wait years more. We’ve been waiting for years. We spent three and a half months in pre-trial (detention) and now we have to wait again,” one of the defendants, Sean Binder, said.

Human Rights Watch (HRW), Amnesty International and other rights groups say the charges should be dropped.

“The charges perversely misrepresent the group’s search-and-rescue operations as a smuggling crime ring,” HRW said in a statement ahead of the trial.

Giorgos Kosmopoulos, an observer from Amnesty International at Thursday’s hearing said he was “very disappointed” at the latest delay.

More than a million migrants and refugees, many escaping war in Iraq and Syria, traveled to Lesbos and other Greek islands from Turkey in 2015-16, with most moving on to Germany and other European Union countries.

The Greek government has taken a tougher line with illegal and irregular migration in recent years, intercepting boats at sea and extending a steel wall along its land border with Turkey. It denies frequent allegations by migrant advocacy groups that it carries out summary deportations, also known as pushbacks.

Greek officials say the country’s intelligence service has assisted in the investigation of a small number of non-profit organizations active on the islands, suspected of collaborating with smuggling rings, but have not made details of the probe public.