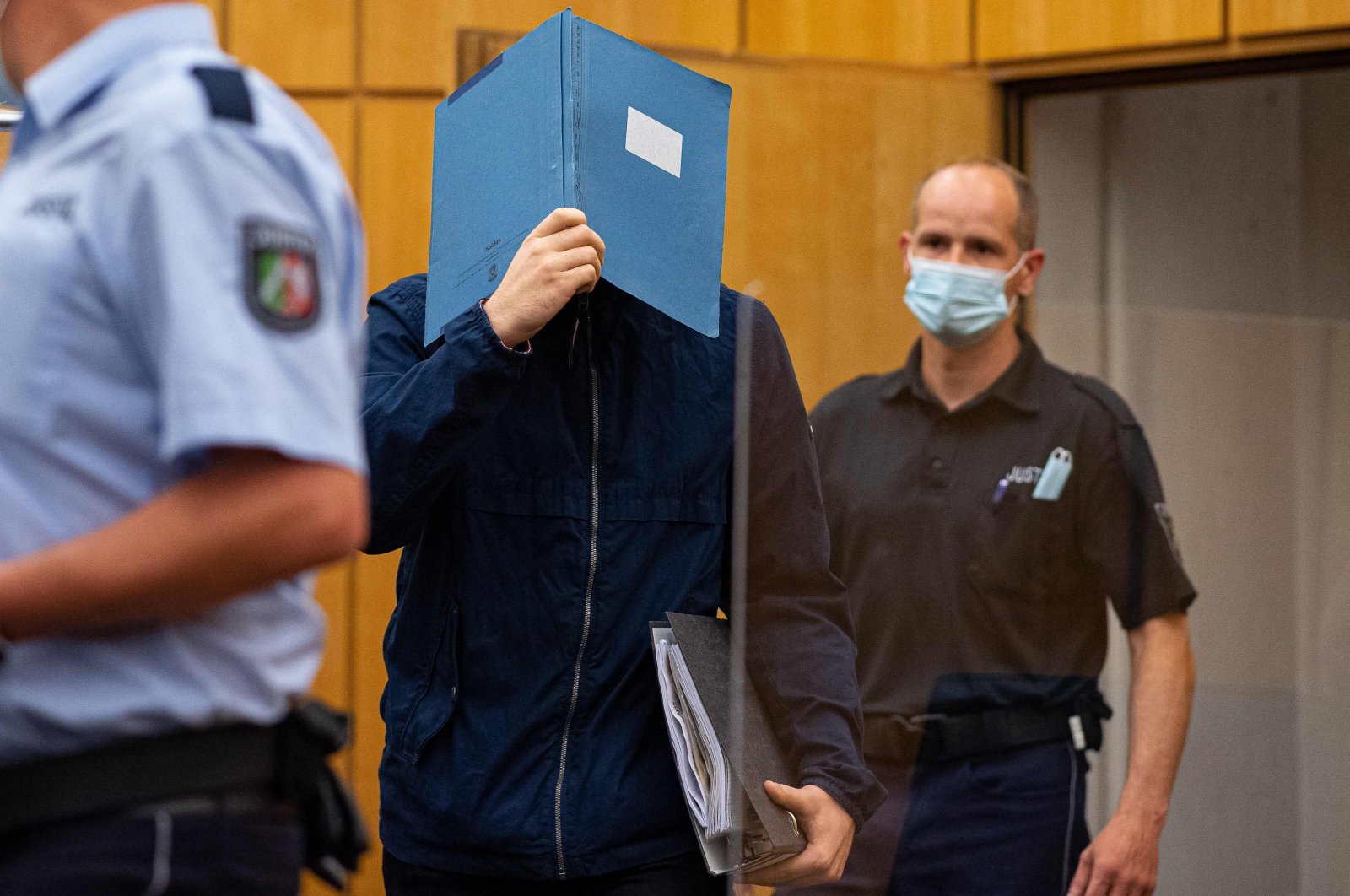 The main defendant (C) hides his face behind a folder as he arrives for his judgement in a child sex abuse case at court in Muenster, northwestern Germany, on July 6, 2021. (AFP Photo)
by French Press Agency - AFP Jul 06, 2021 2:29 pm
RECOMMENDED

Four men received lengthy prison sentences in Germany on Tuesday for taking part in the repeated sexual assault of children and filming the abuse, in a case that is one of three major abuse incidents in the German state of North Rhine-Westphalia to come to light in recent years.

A regional court in the western city of Muenster jailed the defendants for between 10 and 14 years followed by preventive detention.

The mother of the 28-year-old main defendant was convicted of aiding and abetting the abuse and sentenced to five years in prison.

"The proceedings also clearly showed how pedophiles operate: they trick, they lie, they manipulate those around" the victims, he said, adding that he was repulsed to see that the defendants "grinned" and even "laughed loudly" while the evidence against them was presented.

Pheiler said he was relieved none of the victims had had to testify in the trial.

The principal defendant, a computer technician identified only as Adrian V., was found to have trapped boys in a garden shed in April 2020 along with several male accomplices, drugged them and raped them repeatedly over the course of three days.

One of the victims, now 11 years old, was the son of his girlfriend.

Prosecutors presented some 30 hours of video evidence, much of which had been shared in darknet forums. The other men, aged 31 to 43, are believed to have met Adrian V. online.

The chief defendant's mother Carina V., who owns the shed, was found to have been aware of the abuse. The court heard that she had brought the men breakfast while they took turns assaulting the children.

Police are still screening evidence uncovered from the abuse in the shed and have used it to identify suspects across Germany and abroad.

Five men have already been convicted and sentenced in connection with the case and investigators have identified 50 suspects, of whom around 30 are in custody.

The current trial began last November and the sentences were broadly in line with what prosecutors had demanded.

It is just one of a series of gruesome child abuse cases to rock the German state of North Rhine-Westphalia over the last year, prompting a tightening of legislation.

In June 2020, investigators said they were probing some 30,000 suspects as part of an investigation into a large online pedophile network linked to the city of Bergisch Gladbach.

In an earlier scandal in Luegde, 125 kilometers (80 miles) from Muenster, several men abused children hundreds of times at a campsite over a number of years.

Also, in May 2021, German prosecutors announced that they have busted one of the world's biggest international darknet platforms for child pornography, used by more than 400,000 registered members.

In response to the series of cases, the German parliament in March agreed to tougher punishments for using and sharing child pornography.

The law also gives police and prosecutors broader powers to monitor the online communication of suspects.