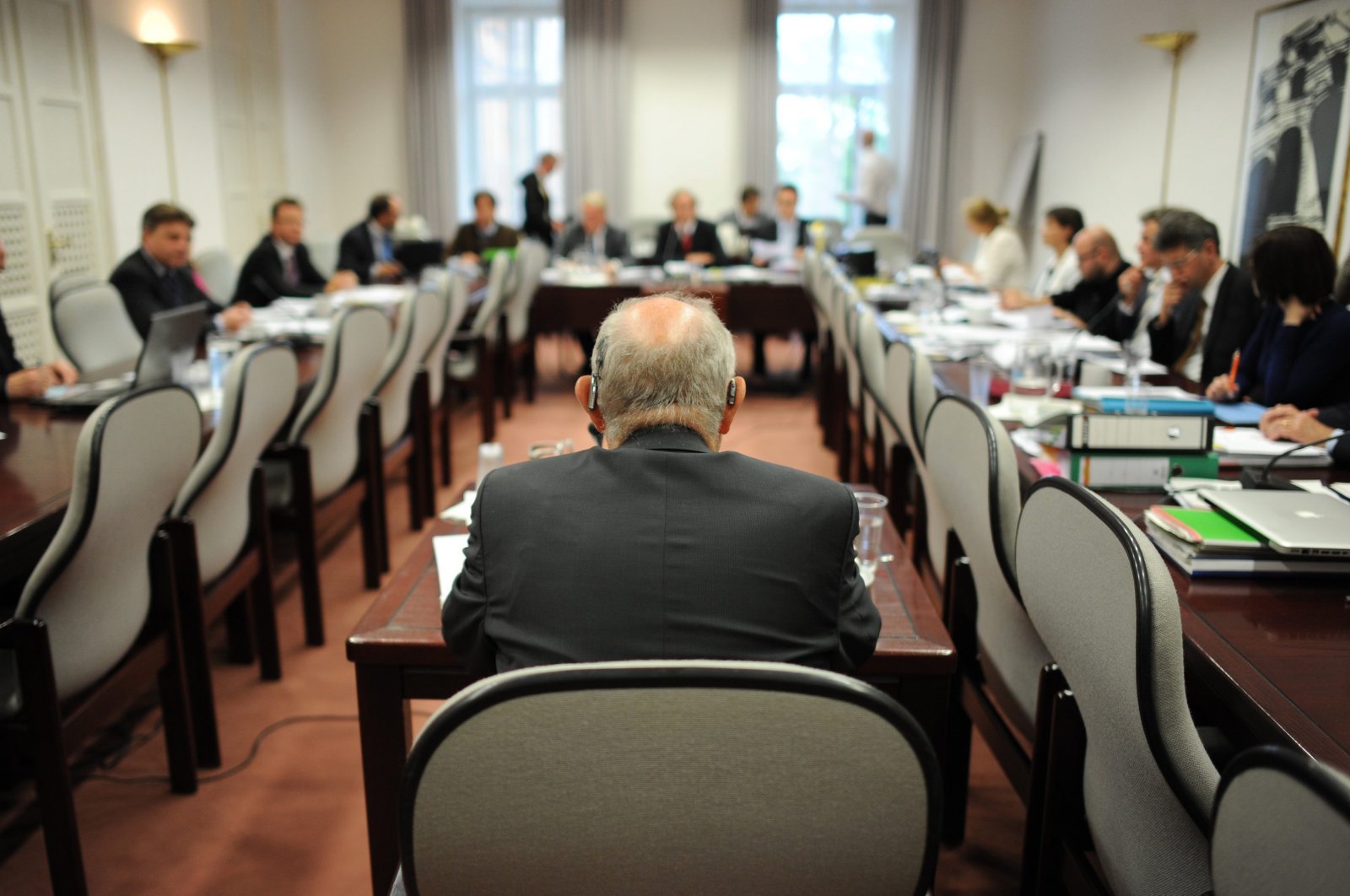 Former Premier of Bavaria Gunther Beckstein (back to camera) sits at a table to testify as a witness in the hearing of the NSU inquiry commission at the Bavarian state parliament in Munich, Germany, June 11, 2013. (EPA Photo)
by DAILY SABAH WITH AA Nov 05, 2021 9:17 am

German police have come under fire for failing to prevent a neo-Nazi killing spree that continued for years, with human rights organizations saying German politicians act as if there was no series of NSU racist murders

Amnesty International on Thursday accused German police of not having done enough to prevent a likely repeat of the racial killings of the far-right terrorist network National Socialist Underground (NSU).

"The longest series of racist murders in the history of the Federal Republic (Germany) was not uncovered by police investigations on Nov. 4, 2011. This fact alone demonstrates the widespread failure of several police and security agencies," said the London-based human rights organization Amnesty International on the 10th anniversary of uncovering the neo-Nazi terror cell.

According to it, the police have not drawn sufficient conclusions from the series of racist murders by the right-wing extremists. "The police have not learned enough from the NSU complex, there is still a lot of need for action for the next federal government," said the organization in Berlin.

The far-right terrorist network went on a killing spree between 2000 and 2007, killing eight Turkish migrants, a Greek citizen and a German police officer. For many years German police ruled out any neo-Nazi motive for these mysterious murders and instead treated immigrant families as suspects, questioning family members over alleged connections with mafia groups or drug traffickers.

Meanwhile, the secretary-general of Amnesty International in Germany, Markus N. Beeko, said the creation of new mechanisms against racism as well as anti-Semitic and right-wing extremist violence were not included in the federal election campaign on Sept. 26. The group said that German politicians act as if there were no NSU attacks in Halle and Hanau.

"Protection against racist violence is a question of internal security and human rights. We expect the new federal government to resolutely tackle the task of advocating for a police force that protects all people in Germany from inhumane violence," Beeko said.

The organization has also demanded, among other things, to create independent investigation mechanisms with sufficient investigative skills as well as mandatory anti-racism training for police officers. The police play a central role in the fight against racism, it said.

"In police investigations, however, people affected by racism are regularly exposed to prejudice and discrimination," Amnesty underlined, noting that messages about racist incidents or right-wing extremist chat groups in social media could also shake confidence in the police. "The police should be part of the solution, not part of the problem."

Amnesty also criticized the fact that the recommendations of the NSU investigative committee in the Bundestag to prevent the German police authorities from failing to investigate such murders again had not gone far enough. The organization's police expert Philipp Kruger explained that other recommendations had not been adequately implemented.

"The way the police are set up today, it doesn't really seem likely that a new failure like the one with the NSU complex can actually be prevented," he said, according to Berlin-based daily newspaper Berliner Zeitung.

Recalling that Chancellor Angela Merkel promised that the killings would be fully clarified at the NSU victims commemoration event in 2012, Amnesty's human rights and racism expert Alexander Bosch told German newspaper Frankfurter Allgemeine Zeitung (FAZ) that she had not kept that promise. Bosch said that it has still not been clarified who helped the murders, even though it has been five years since the NSU was uncovered. Criticizing that important points of the NSU structure were not taken into account by the police and politicians, Bosch said, "There is an impression that it will not be taken into account from now on."

“We are seeing signs of institutional racism in Germany that allowed the NSU killings to be committed. This is not being addressed,” Bosch said, noting that the networks and structures that support the NSU are still active. As an example, Bosch cited the fact that racist groups who call themselves citizens of the "Empire" roam around freely. "But official authorities still underestimate the danger posed by these racist structures," he said.

Many questions still linger over the role of Germany's intelligence apparatus in trying to cover up the racial killings. Despite serious question marks about several former service officers and informants about their contacts with NSU suspects, none of them were indicted or even charged.

The role of former secret service employee Andreas Temme, who was at the crime scene when Ismail Yozgat was murdered by the NSU in 2006 in the central German city of Kassel, has not been seriously investigated by the authorities and remains a mystery to this day.

Authorities in the central German state of Hesse had decided to keep an intelligence report on Yozgat’s murder secret for 120 years, triggering further speculations about the NSU’s possible ties. Following widespread criticism, they decided that these files should be restricted from public view for at least 30 years. Dozens of secret files belonging to the domestic intelligence service were reportedly destroyed after the murder scandal was uncovered.