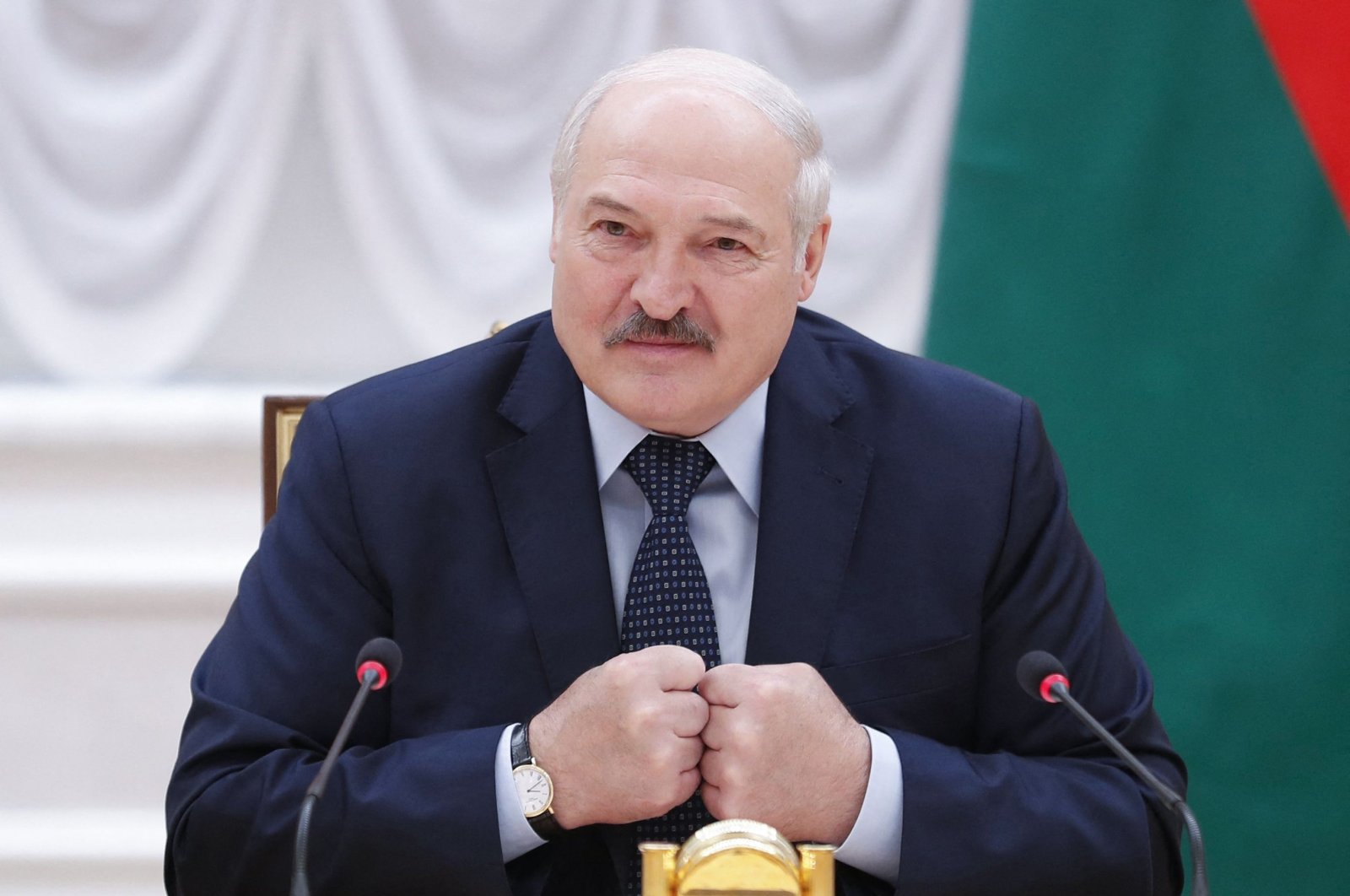 Belarusian President Alexander Lukashenko speaks during a meeting with Commonwealth of Independent States officials in Minsk, Belarus, May 28, 2021. (AFP Photo)
by ASSOCIATED PRESS May 28, 2021 1:22 pm
RECOMMENDED

Belarusian President Alexander Lukashenko headed to Sochi Friday where he was due to meet with Russian President Vladimir Putin at his Black Sea residence to seek assistance amid a bruising showdown with the European Union over the diversion of a Ryanair flight to arrest a dissident journalist.

Belarus provoked the EU's outrage when Belarusian flight controllers on Sunday told the crew of a Ryanair jet flying from Greece to Lithuania there was a bomb threat and instructed it to land in the Belarusian capital, Minsk, where 26-year-old journalist Raman Pratasevich was arrested along with his Russian girlfriend.

The EU responded by barring Belarusian carriers from its airspace and airports and advising European airlines to skirt Belarus. The bloc's foreign ministers agreed Thursday to ramp up sanctions to target the country’s lucrative potash industry and other sectors of the Belarusian economy that are the main cash-earners for Lukashenko's government.

Lukashenko, who has relentlessly stifled dissent during his rule of more than a quarter-century, defended his actions and lashed out at the West for trying to "strangle” his country with sanctions. He said Friday before departing to Moscow that he hopes to reach an agreement with Putin on restoring the air link between Russia and Belarus that has been suspended because of the coronavirus pandemic.

The 66-year-old Belarusian ruler has faced months of protests following his reelection to a sixth term in an August 2020 vote that the opposition rejected as rigged. He has responded with a wide-ranging crackdown, with more than 35,000 people arrested since the protests began and thousands beaten.

The West has responded by slapping sanctions on Belarusian officials involved in the vote-rigging and repressions against protesters. Amid Western pressure, Lukashenko has relied on political and financial support from his main ally, Russia.

The ties, however, often have been strained with Lukashenko scolding Moscow for trying to force him to relinquish control over prized economic assets and eventually abandon Belarus' independence. In the past, the Belarusian leader often has tried to play the West against Moscow, raising the prospect of a rapprochement with the EU and the United States to wring more subsidies and concessions out of Moscow.

Such tactics no longer work after Lukashenko's crackdown on protests last fall made him a pariah in the West, and the flight's diversion has now deepened his isolation. Many observers warn that he has become easy prey for the Kremlin, which may use Lukashenko's weakness to push for closer integration.

Moscow has offered Lukashenko quick political support over the plane's diversion, cautioning the EU against hasty action until the incident is properly investigated and arguing that Lukashenko's actions were in line with international protocols in case of a bomb threat.

On Friday, Russian Foreign Ministry spokesperson Maria Zakharova denounced the EU's decision to ask European airlines to avoid Belarusian airspace as "utterly irresponsible and threatening passengers' safety.” Some in the West alleged Moscow's involvement in the Ryanair flight's diversion and warned that it could exploit the situation to advance its perceived plan to incorporate Belarus. Lithuanian Foreign Minister Gabrielius Landsbergis charged Thursday that "Lukashenko is playing with Putin, and trying and helping Putin to annex the country,” adding that "we should send the signals to Russia as well that annexation wouldn’t go well with Europe.”

Asked earlier this week if Russia had any role in the plane's diversion, German Chancellor Angela Merkel said there was no confirmed information of Russia's involvement, noting that "we can’t deal in speculation now.” Russian officials have angrily dismissed allegations of Moscow's involvement in the incident.