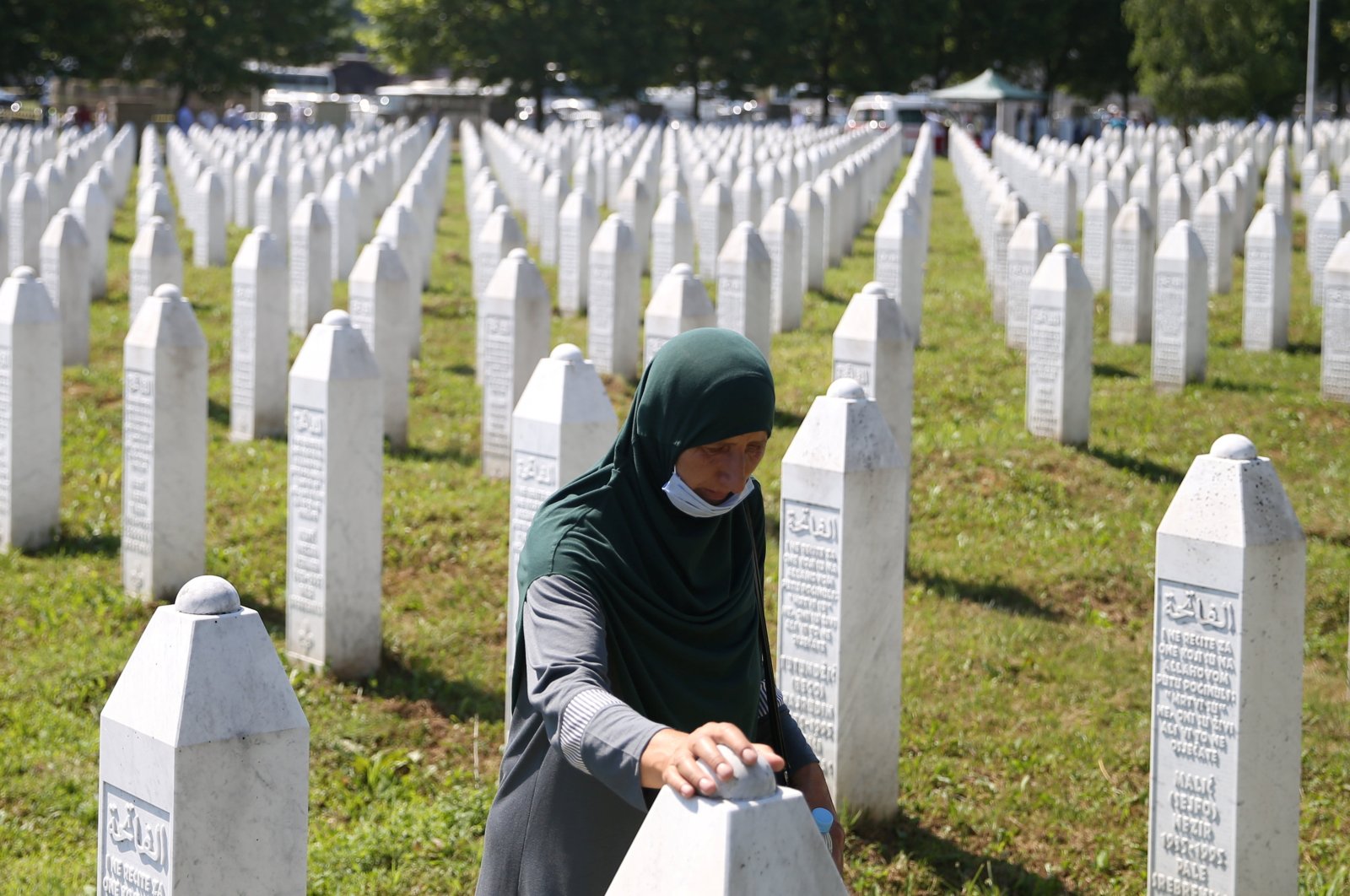 A woman is seen at a graveyard, ahead of a mass funeral in Potocari near Srebrenica, Bosnia- Herzegovina, July 11, 2020. (Reuters Photo)
by ASSOCIATED PRESS Jul 23, 2021 2:46 pm
RECOMMENDED

The top international official in Bosnia-Herzegovina Friday banned denial of genocide in the Balkan country to counter attempts by Bosnia’s Serbs to deny the scope of the 1995 massacre in Srebrenica, Europe's only post-World War II genocide.

Valentin Inzko, the outgoing head of Bosnia-Herzegovina's Office of the High Representative, or OHR, Friday imposed changes to the country's criminal law, introducing prison sentences of up to five years for genocide deniers, and for any glorification of war criminals, including naming of streets or public institutions after them.

As the top international body overseeing the implementation of the peace agreement that ended Bosnia-Herzegovina's 1992-95 war, the OHR has the authority to impose decisions or dismiss officials who undermine the postwar ethnic balance and reconciliation efforts between the Bosniaks, who are mostly Muslim, Bosnia-Herzegovina's Serbs and Croats.

Hailed by Bosniak politicians and the relatives of the victims, Inzko's decision was swiftly rejected by Bosnian Serb leader Milorad Dodik, who is a member of Bosnia-Herzegovina's multiethnic presidency and the top politician in the Serb entity called Republika Srpska.

Dodik threatened to launch a process of "dissolution" of Bosnia-Herzegovina, the Klix news portal reported.

"Republika Srpska rejects this, genocide did not happen, Serbs must never accept this,” he said. Dodik has repeatedly criticized the OHR and the West as biased against Serbs in Bosnia-Herzegovina.

A resolution put forward by Serb allies Russia and China that would have immediately stripped the powers of the OHR in Bosnia-Herzegovina was rejected in the United Nations Security Council Thursday.

The genocide in Srebrenica happened after Bosnian Serbs took control over the eastern enclave in July 1995. They executed Bosniak men and boys and dumped their remains into mass graves which were later dug out and reburied to cover the crime.

The victims' remains are still being unearthed and identified. Both Bosnian Serbs and Serbia, which backed the Bosnian Serbs during the war, have called the massacre a crime, refusing to acknowledge it was genocide.

Bosnian Serbs also have honored their wartime leader Radovan Karadzic and military commander Ratko Mladic as heroes, although both have been convicted of genocide and sentenced to life imprisonment by the Hague-based tribunal.

Murals featuring Mladic and Karadzic can be seen in many towns in Republika Srpska, which is the name for the Serb entity in Bosnia-Herzegovina.

The United States Embassy in Bosnia-Herzegovina said Friday that "genocide denial and war criminal glorification are unacceptable and undermine the mutual trust," noting that Inzko's move presents "a starting point for more concrete debate and steps by local actors when it comes to practical implementation.”

"We must underscore that the genocide at Srebrenica is not a matter of debate, but of historical fact,” the statement said. "It is time to truly turn to a future based on peace and mutual trust."

Kada Hotic, from the Mothers of Srebrenica group gathering relatives of the victims, said such a law should have been brought earlier.

"I welcome the decision anyway,” she said. "Without acceptance there is no forgiveness and I will not forgive until someone pleads for forgiveness," she explained.

In Sarajevo, the Bosnian capital, the prosecutor's office said they will monitor any statements by individuals or groups and act in accordance with the new amendments. Inzko, an Austrian diplomat, is leaving his post Aug. 1 following his resignation in May after 12 years in office. He will be succeeded by Christian Schmidt of Germany.