British embassy employee arrested in Germany for 'spying for Russia' 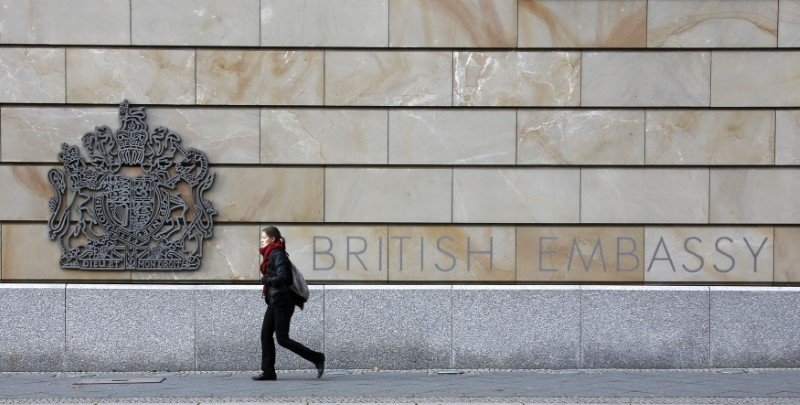 A British man suspected of spying for Russia in exchange for cash has been arrested in Germany, federal prosecutors said Wednesday, in a case expected to stoke tensions between Berlin and Moscow.

The suspect identified only as David S., who worked until the time of his arrest as local staff at the British embassy, "on at least one occasion passed on documents he acquired as part of his professional activities to a representative of Russian intelligence."

"The accused received a cash payment in an unspecified amount in return," the federal prosecutor's office said in a statement. It said David S., who was taken into custody Tuesday in the eastern city of Potsdam on an arrest warrant issued on August 4, was believed to have been spying since November 2020 "at the latest."

His arrest was the result of a joint operation by German and British authorities. David S. is to appear later Wednesday before an investigating judge who will decide whether he will be remanded in custody.

Germany has arrested a number of people in recent years accused of spying for Russia, but the capture of a suspect from a close ally is highly unusual. In June, German police arrested a Russian scientist working at a German university accused of working for the Russian secret service since early October 2020 at the latest. He is also suspected of accepting cash in exchange for his services.

Moscow is at loggerheads with a number of Western capitals after a Russian troop build-up on Ukraine's borders and a series of espionage scandals that have resulted in diplomatic expulsions.

In June, Italy said it had created a national cybersecurity agency following warnings by Prime Minister Mario Draghi that Europe needs to protect itself from Russian "interference." The move came after an Italian navy captain was caught red-handed by police selling confidential military documents from his computer to a Russian embassy official.

The leaders of nine eastern European nations in May condemned what they termed Russian "aggressive acts," citing operations in Ukraine and "sabotage" allegedly targeted at the Czech Republic. Several central and eastern European countries expelled Russian diplomats in solidarity with Prague, but Russia has branded accusations of its involvement as "absurd" and responded with tit-for-tat expulsions.

The latest espionage case also comes at a time of highly strained relations between Russia and Germany on a number of fronts, including the ongoing detention of Kremlin critic Alexei Navalny, who received treatment in Berlin after near-fatal poisoning.