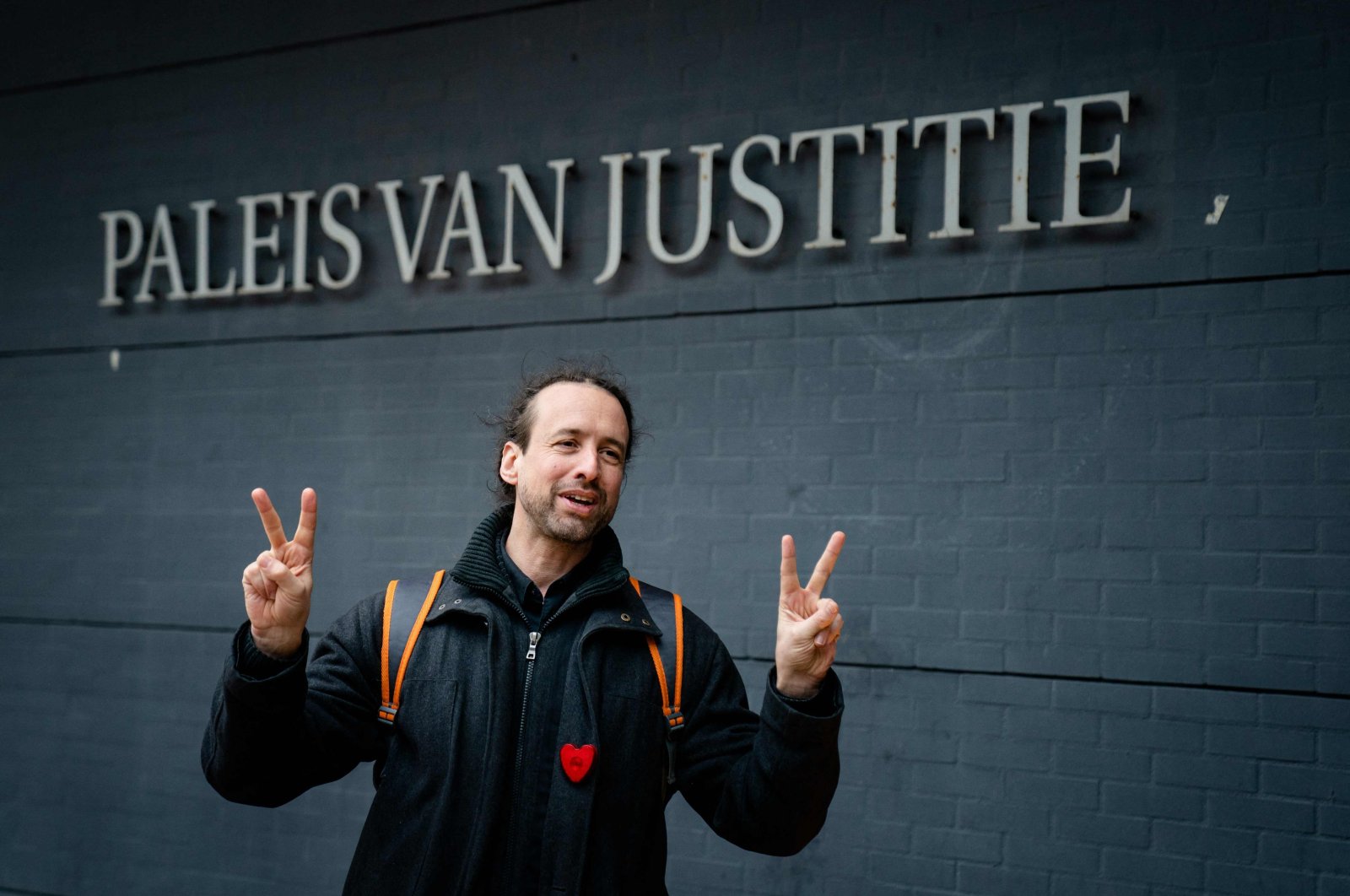 A member of the protest group Viruswaarheid (Virus Truth) Willem Engel arrives at the court of appeal where the Dutch state asked the court to suspend the judge's decision to cancel the nationwide curfew, in The Hague, The Netherlands, Feb. 16, 2021. (AFP Photo)
by French Press Agency - AFP Feb 16, 2021 7:39 pm
RECOMMENDED

Curfews have gone too far and they infringe up freedom and privacy, a Dutch court says, while ordering the nationwide coronavirus lockdown to be removed immediately. The decision comes as the Netherlands is one of the nations throughout the world dealing with riots and public outcry over stifling pandemic measures.

Governments are facing pushback from populations tired of measures aimed at slowing the virus's relentless spread, and countries are scrambling to secure sought-after vaccines in a bid to return to a pre-pandemic normal.

A deadly second wave prompted a further tightening of restrictions across Europe this winter, including in the Netherlands where half of all new infections are linked to mutated COVID-19 variants. In response, the Dutch government had imposed a 9:00 pm to 4:30 am curfew in January.

Violent protests engulfed several Dutch cities in defiance of the curfew – the country's worst riots in decades – and last week the government extended the overnight stay-at-home order until March 2.

On Tuesday, a judge said the government wrongly used emergency powers to bring in the curfew after a case launched by the Viruswaarheid (Virus Truth) group, which has led a series of protests against COVID-19 measures in the Netherlands.

"The curfew must be lifted immediately," the court said in a statement.

"The curfew is a far-reaching violation of the right to freedom of movement and privacy ... This requires a very careful decision-making process."

Amid mounting fatigue over coronavirus restrictions – protests against virus measures have been waged from France to Cyprus and Israel – governments are pinning hopes on vaccines to end the pandemic that has infected nearly 110 million people globally.

With demand far outstripping supply, however, countries are racing to get their hands on doses of much-needed vaccines. Nearly 172 million vaccine doses have been given worldwide, with the majority going to richer countries.

North Korean hackers tried to break into the computer systems of Pfizer to search for information on a coronavirus vaccine and treatment technology, South Korea's spy agency said Tuesday.

The impoverished nation has been under self-imposed isolation since closing its borders in January last year, as much of the world shut down to protect against the virus that has now killed more than 2.4 million people worldwide.

The North's leader Kim Jong Un, who held a military parade last month despite the pandemic, has repeatedly insisted that the country has had no coronavirus cases, although outside experts doubt those claims.

In a boost for poorer countries, the World Health Organization (WHO) approved the AstraZeneca vaccine on Monday, paving the way for millions of doses to be distributed.

The AstraZeneca shot, which is easier to store and transport than some of its rivals, will account for almost all the 337M vaccine doses set to be shipped under COVAX, an international program designed to ensure that poor countries are not overlooked.

Also on Tuesday, Japan outlined a cautious coronavirus vaccine rollout. The minister overseeing the process, however, admitted he had "no idea" how much of the population will be vaccinated by this summer's Olympics.

Japan has lagged behind other major economies as it is running domestic trials before approving vaccines.

Meanwhile, the economic devastation from the virus was again laid bare.

The Netherlands economy shrunk 3.8% in 2020, the sharpest contraction ever measured, the country's statistics office said Tuesday.

And in Singapore, which is suffering its worst-ever recession, the government unveiled a fresh multi-billion-dollar package to help pandemic-battered businesses.