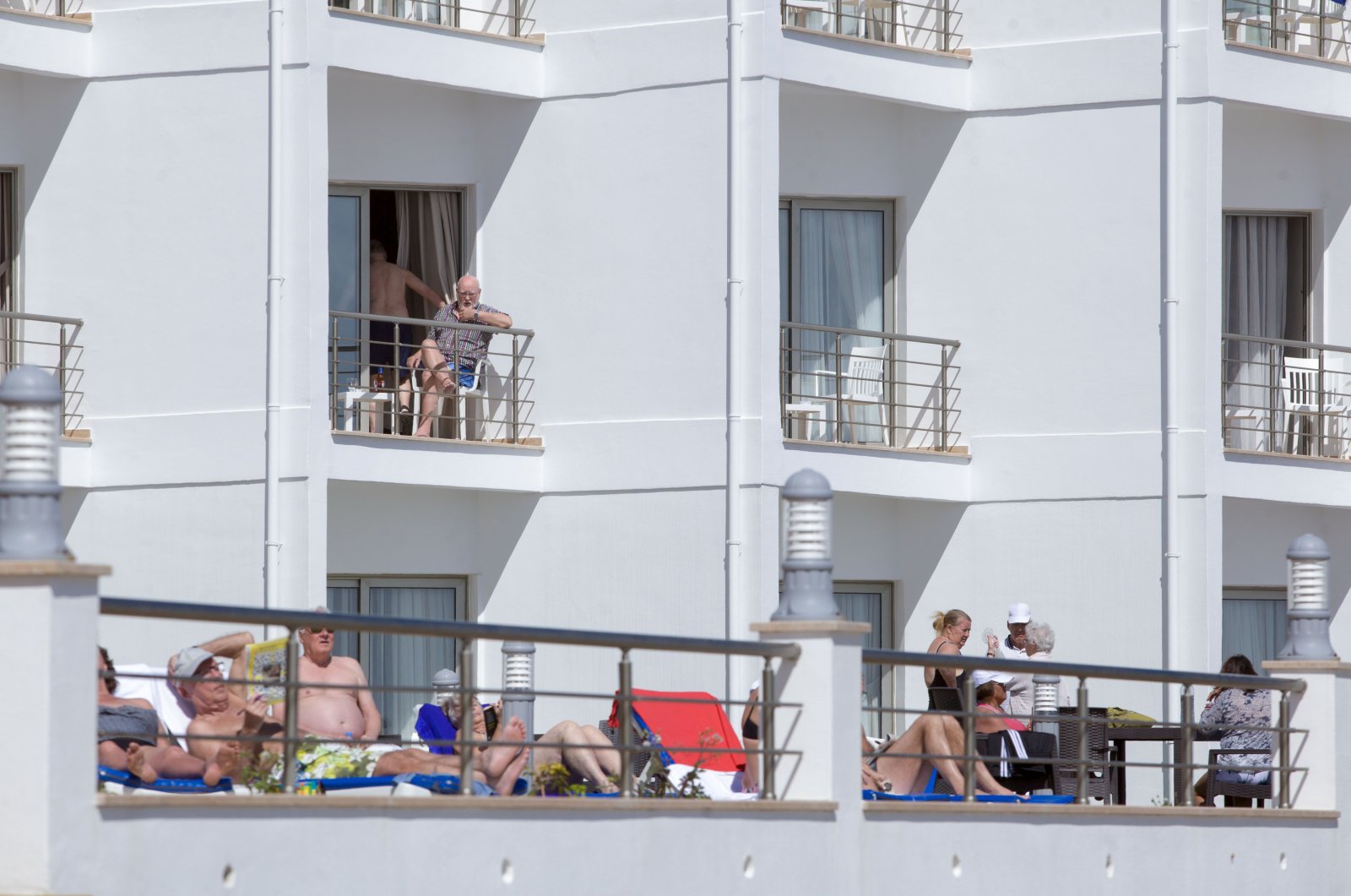 Tourists sit in the sun at the Salamis Bay Conti Hotel, under quarantine due to the novel coronavirus outbreak, in the eastern Cypriot port city of Famagusta in the Turkish Republic of North Cyprus (TRNC), on March 10, 2020. (AFP Photo)
by Daily Sabah with AFP Mar 14, 2020 10:01 am
RECOMMENDED

The COVID-19 pandemic prompted authorities to restrict travel to the divided island of Cyprus to prevent the spread of the novel coronavirus, which affected 26 people on the island so far.

The cabinet of the Turkish Republic of Northern Cyprus (TRNC) announced early Saturday that all entries to the island except for TRNC citizens and residents with legal permission have effectively been banned until April 1. The ban includes arrivals from Turkey, which serves as the main gateway of the northern one-third of the island. The measures will undoubtedly affect the country’s two vital sectors – tourism and the casino industry.

All those who enter the TRNC will be subject to 14-days of monitoring and control in their homes regardless of the country they traveled from, the statement said. The public hospital in the eastern port city of Famagusta (Gazimağosa) will be used as a quarantine hospital.

A 14-day administrative leave was issued for all public personnel except for police officers, firefighters, health workers, civilian aviation employees and finance authorities. All businesses except for pharmacies, gas stations, bakeries and supermarkets were also ordered to close during the same period. The shutdown for schools ordered on March 10, when the first case was diagnosed, was also extended to March 27.

The TRNC government called on Turkish Cypriot citizens not to leave their homes unless necessary, adding that the cabinet will evaluate imposing a partial or full curfew. The statement also called against public meetings and mass prayers. President Mustafa Akıncı also called on the government to declare a state of emergency, which is currently evaluated by parties. “We need to become introverted for 14 days. Everyone needs to spend this period at their homes with the condition that necessary services being provided,” Akıncı told reporters.

In the southern half of the island, the outlook is grimmer as 21 people were diagnosed with the coronavirus, including seven who were recently diagnosed upon return from the U.K.

All private and public educational institutions will remain closed until April 10.

Anastasiades said restrictions at crossing points on the divided island's U.N.-controlled cease-fire line would remain in place, asking Cypriots to cross only for "necessary trips."

Initial restrictions on the Green Line had angered Cypriots from both south and north, prompting scuffles in crossing points.

Anastasiades called for "collective responsibility" and "mutual respect" in responding to the threat of the pandemic. Indoor gatherings of more than 75 people had already been banned and football matches have been canceled for the rest of March.

Anastasiades added that imports or exports have not been restricted. "The measures do not affect the unhindered commercial activity of the country," he said. "For this reason, panic is not justified."

The measures taken were in line with recommendations from the EU and the World Health Organization (WHO), he said.