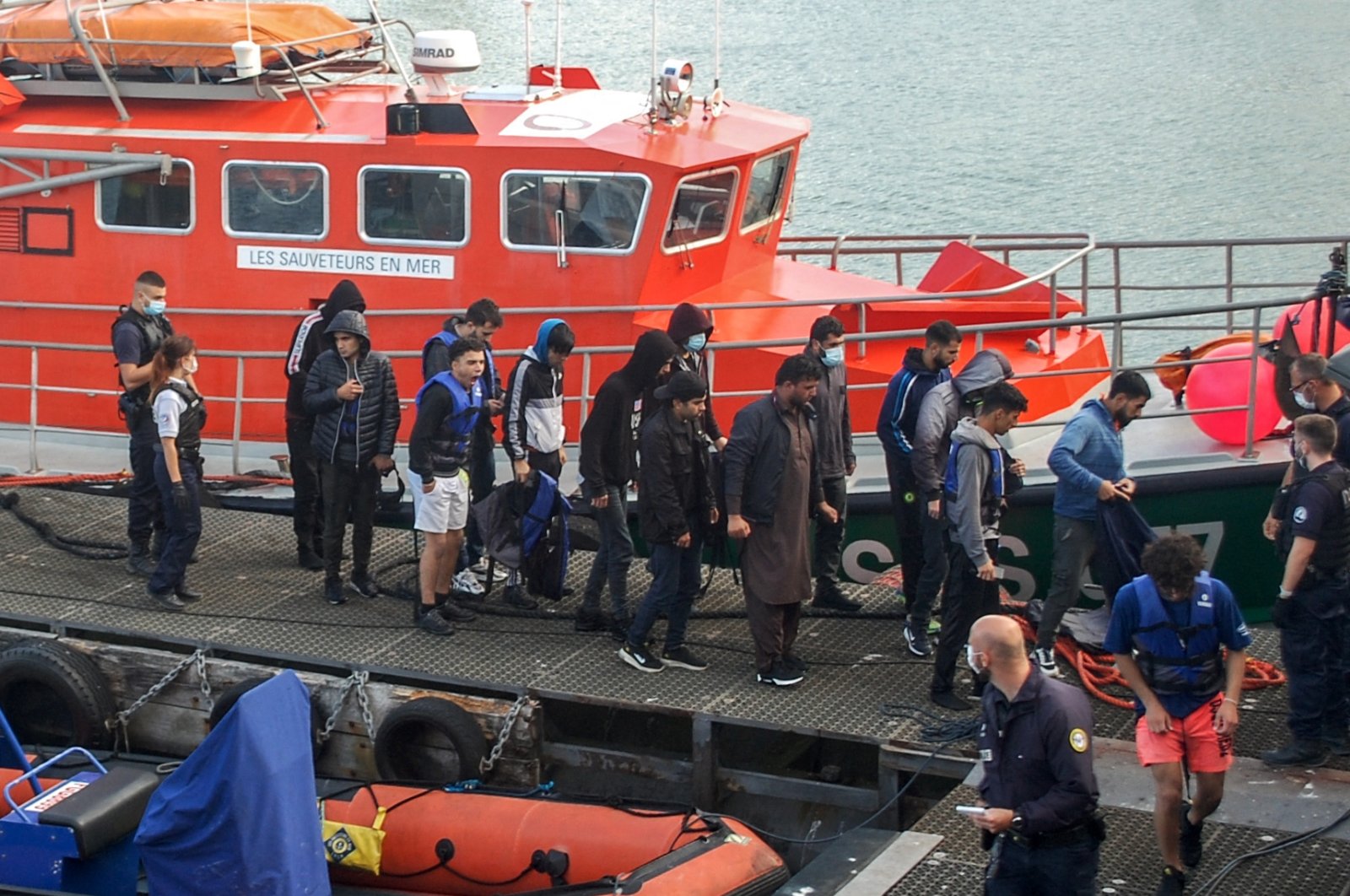 Iraqi, Iranian and Afghan migrants, with two minors among their number, disembark from a vessel after being rescued as their inflatable boat was filling with water on the English Channel, in Calais, northern France on Sept. 15, 2021. (AFP Photo)
by Agencies Sep 16, 2021 2:33 pm
RECOMMENDED

The European Union, Norway and Switzerland received around 45,000 asylum applications in July, the highest number since the outbreak of the coronavirus crisis.

The preliminary figures were announced by the European Asylum Support Office (EASO) on Thursday. In June, around 40,600 people applied for protection status. The Malta-based agency calculated that applications increased from Afghanistan in particular.

Most applications continue to come from Syria (around 8,500), according to EASO. Since December 2020, however, the gap in arrivals from Syria and Afghanistan has been narrowing fast. Of the approximately 45,000 asylum-seekers, 2,200 were unaccompanied minors, according to the analysis. Applications from unaccompanied minors have not been registered in such numbers since November 2016.

While the number of applications increased in many countries, fewer applications were reported from some North and West African countries, including Mali, which recorded a large decrease in July with some 570 applications compared to about 1,000 in June.

EASO also appealed to the European Union to step up its help for people trying to flee Afghanistan, accusing the bloc of failing to do enough to assist those living in fear of Taliban rule. More than 100,000 people were airlifted out of Kabul in a chaotic exodus late last month after President Joe Biden announced that American troops would withdraw, and the Taliban seized control of strife-torn Afghanistan in just a few weeks. Thousands more Afghans want to leave.

"The EU should be sharing, rather than shirking, the responsibility to offer them protection,” the 24 nongovernmental organizations (NGOs), including Amnesty International, Caritas Europa, the International Rescue Committee, Oxfam, and the Red Cross, said in a statement.

The groups warned that 18 million people are in urgent need of humanitarian assistance in Afghanistan, nearly half the population. More than 630,000 people have been forced from their homes so far this year due to violence and drought. There was no immediate reaction from the European Union.

Despite the rise in asylum applications, the EU faces no imminent challenge from the arrival of thousands of Afghan refugees, top European officials say. Most Afghans are sheltering in neighboring Iran and Pakistan, and to a lesser extent in Uzbekistan and Tajikistan. Still, that hasn’t stopped some European governments from sounding the alarm amid deep concern of a repeat of events of 2015, when well over 1 million people entered Europe, most of them fleeing conflict in Syria, sparking one of the EU’s deepest political crises.

"We regret the misleading and alarmist rhetoric expressed by some European leaders in the past weeks,” the groups said. They said such talk "may raise barriers to refugees' integration and inclusion in European societies” and that it could stoke "fears about a nonexistent crisis at Europe’s borders.”

They called on the EU to set up safe pathways for Afghans in need of protection and the establishment of "an ambitious” resettlement program in Europe for people already sheltering in Iran and Pakistan.