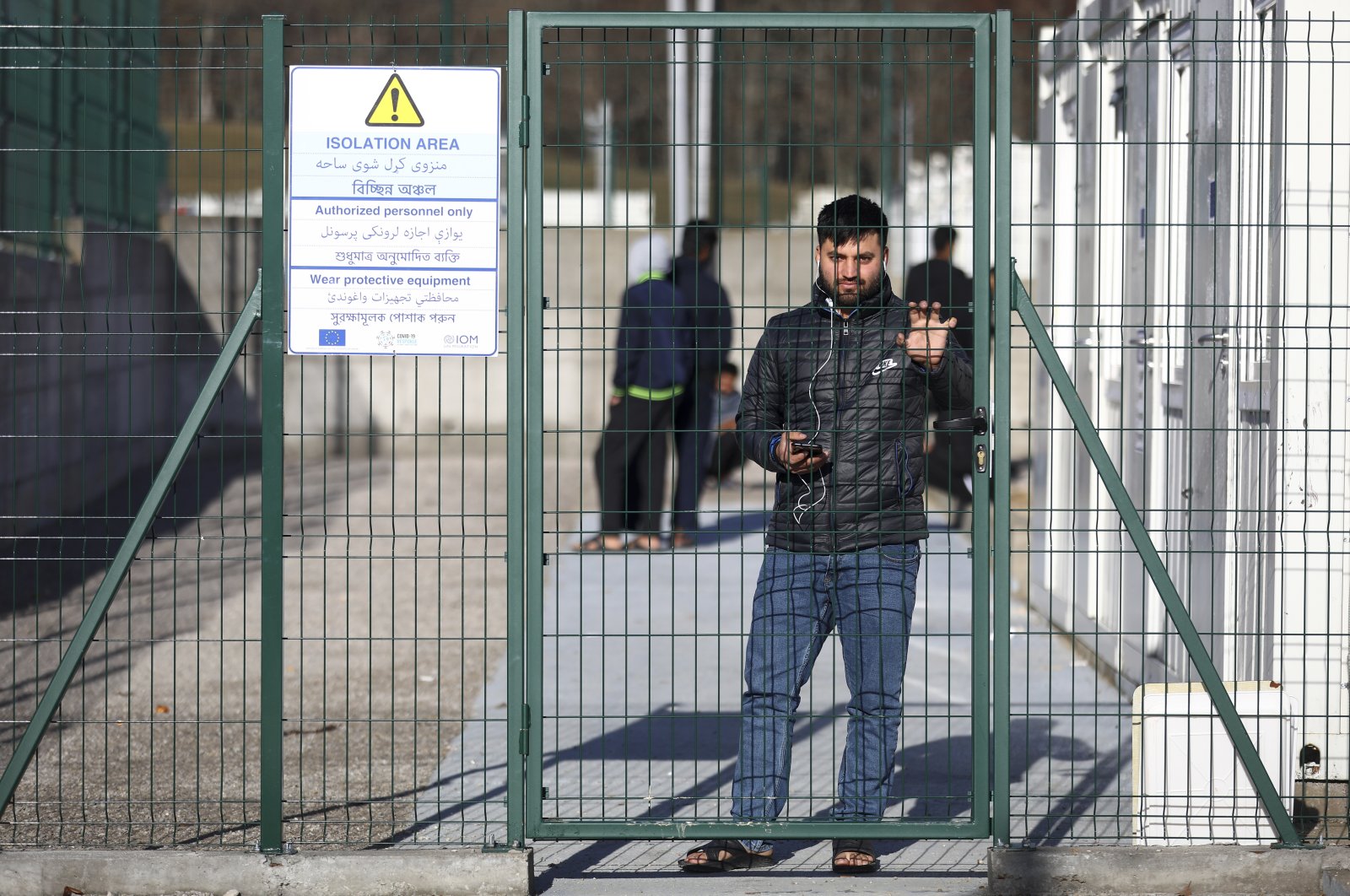 A migrant stands behind a gate at the newly built camp that was inaugurated by the European Union and International Organization for Migration officials along with Bosnian authorities near Bihac, northwestern Bosnia-Herzegovina, Nov. 19, 2021. (AP Photo)
by ASSOCIATED PRESS Nov 19, 2021 7:43 pm
RECOMMENDED

The European Union praised Bosnia-Herzegovina for achieving progress in its migration management efforts by inaugurating a new facility on Friday.

The new, organized Lipa camp, in the northwestern Krajina region, can accommodate, screen and register up to 1,500 people, and includes safe zones for unaccompanied minors and vulnerable people.

It was erected in a remote, rural area where local authorities had forcibly moved hundreds of people last fall from overcrowded EU-funded, U.N.-run facilities in surrounding town centers due to the growing hostility of the local population.

“Eleven months ago, exactly, we were standing here, (in) the same location but completely different circumstances, in the middle of a humanitarian crisis,” Johann Sattler, the EU representative in Bosnia-Herzegovina, said at the opening ceremony Friday. “Today we are here in this new multipurpose reception center.”

He said the Bosnian-run camp, funded with 1.7 million euros from the EU, signified the “opening of a new chapter” of migration management in impoverished Bosnia – which borders with EU-member Croatia where most migrants seek to continue their journey into the affluent 27-country bloc.

The decision by Bosnian authorities last year to leave on the site of the new camp some 1,400 people in the cold, with no facilities, heat or food, had angered Brussels, which threatened to withdraw financial support for Bosnia-Herzegovina's migration management structures.

Under a strong international outcry, Bosnian authorities worked to overcome local resistance before agreeing months ago to erect the new facility. At the same time, the slowdown in irregular migratory flows in the Balkans due to the COVID-19 pandemic helped ease the pressure in Krajina.

Some 3,000 migrants and refugees are currently stuck in Bosnia-Herzegovina, compared to over 10,000 at the start of last year.

The country – still deeply scarred by a brutal interethnic war in the 1990s – became migrants' last practicable, albeit illegal, jumping-off point for the EU's prosperous heartland after a series of Balkan border closures in 2016.

Since then, over 84,000 migrants have entered the country of 3.5 million, mostly on its eastern border with Serbia, after a trek through Greece, North Macedonia and Montenegro. Fewer than 3% requested asylum in Bosnia-Herzegovina.

At first, Bosnian authorities were happy to wave the newcomers through to Croatia. But after Croatian authorities sealed the border and reportedly resorted to violent pushbacks of migrants, Krajina was overcome by thousands of people forced to sleep outside in forests, streets and abandoned buildings.

As hostility toward migrants grew, local authorities in Krajina began shutting down temporary reception centers established and run in the area by the United Nations migration agency, the International Organization for Migration (IOM). At the same time, national authorities used local resistance as an excuse to reject assuming responsibility for housing migrants.

“We have managed to turn a kind of a tragedy of last year into an opportunity because we (now) have a state-of-the-art camp ... respecting all humanitarian and human standards and run by the state," said Laura Lungarotti, Bosnia IOM chief of mission.

“I encourage (Bosnia-Herzegovina) to build on this achievement to work on sustainable migration management on all levels of government, across the whole country,” she added.