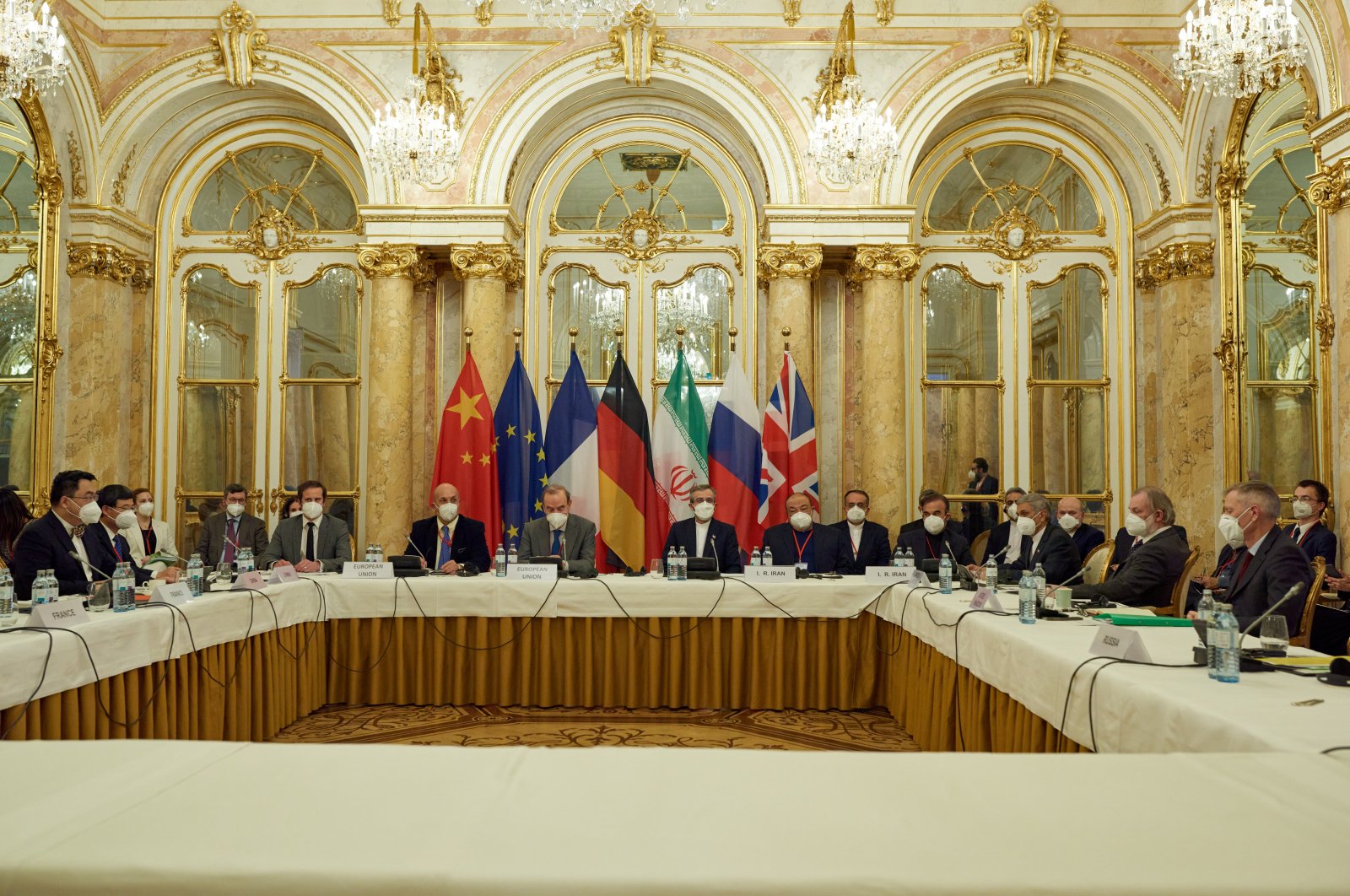 Diplomats from the European Union, Iran and Russia appeared upbeat as world powers and Iran held their first talks in five months on Monday to try to salvage their 2015 nuclear deal, despite Tehran taking a tough stance in public that Western powers said would not work.

Diplomats said time is running out to resurrect the pact that the U.S. abandoned under then-President Donald Trump in 2018, angering Iran and dismaying the other powers involved – Britain, China, France, Germany and Russia.

EU, Iranian and Russian delegates for the talks offered optimistic assessments after the new round began in Vienna with a session of the remaining parties to the deal – however, without the U.S., whom Iran refuses to meet face-to-face.

"I feel extremely positive about what I have seen today," Enrique Mora, the EU official chairing the talks, said after the meeting – the seventh round of talks aimed at reviving a deal under which Iran limited its disputed uranium enrichment program in return for relief from U.S., EU and U.N. economic sanctions.

Six rounds of indirect talks were held between April and June. The new round began after a hiatus triggered by the election of a new Iranian president, Ebrahim Raisi.

Mora told reporters the new Iranian delegation had stuck to its demand that all sanctions be lifted, but he also suggested Tehran had not rejected outright the results of the previous six rounds of talks.

"They have accepted that the work done over the first six rounds is a good basis to build our work ahead," he said. "We will be of course incorporating the new political sensibilities of the new Iranian administration."

Russia's envoy to the talks, Mikhail Ulyanov, said on Twitter they "started quite successfully." Asked he if was optimistic, Iran's top negotiator, Ali Bagheri Kani, told reporters: "Yes, I am."

However, it was not clear whether Iran had agreed to resume the talks where they had left off in June – as demanded by Western powers – or that the optimism was justified.

A European diplomat struck a pessimistic note, saying the Iranians stuck to their positions and at times toughened them, which was hardly encouraging.

The diplomat said matters would become clearer when detailed talks on sanctions take place Tuesday and on nuclear issues Wednesday.

The meeting in Vienna ended a hiatus triggered by the election in June of Raisi, an anti-Western hardliner. The talks are effectively indirect negotiations between Tehran and Washington, with other officials shuttling between them.

Tehran's new negotiating team has set out demands that U.S. and European diplomats consider unrealistic, Western diplomats say. They include insisting that all U.S. and European Union sanctions imposed since 2017, including those unrelated to Iran's nuclear program, be dropped.

Bagheri Kani also said Washington and its Western allies should guarantee no new sanctions would be imposed in the future.

"All parties in the meeting accepted Iran’s demand that first the situation of illegal and unjust U.S. sanctions ... should be cleared and then (we) discuss other issues and decide on those issues," he told reporters.

There was no immediate comment from the big powers on Kani's remarks about the sequencing of topics.

The U.S. objective for Iran is to have the country return to full compliance with the 2015 deal, White House press secretary Jen Psaki said Monday.

During a telephone call, French President Emmanuel Macron urged Raisi "to engage constructively" to permit a quick return to the agreement and to keep Iran's commitments to the United Nations atomic watchdog, Macron's office said.

Tehran's conflicts with the International Atomic Energy Agency (IAEA), which monitors the nuclear program, have festered. Iran has pressed ahead with its uranium enrichment program and the IAEA says its inspectors have been treated roughly and were refused access to reinstall monitoring cameras at a site it deems essential to reviving the deal.

"If Iran thinks it can use this time to build more leverage and then come back and say they want something better, it simply won't work. We and our partners won't go for it," U.S. envoy Robert Malley told BBC Sounds on Saturday. He warned that Washington would be ready to ramp up pressure on Tehran if talks collapse.

Iranian officials have insisted in the run-up to Monday that their focus is purely the lifting of sanctions rather than nuclear issues. Highlighting that, its 40-strong delegation mostly included economic officials.

"To ensure any forthcoming agreement is ironclad, the West needs to pay a price for having failed to uphold its part of the bargain. As in any business, a deal is a deal, and breaking it has consequences," Bagheri Kani said in a defiant column in the Financial Times on Sunday.

"The principle of 'mutual compliance' cannot form a proper base for negotiations since it was the U.S. government which unilaterally left the deal."

"The delegation of the Islamic Republic of Iran is in Vienna with a firm determination to reach an agreement and is looking forward to fruitful talks," Khatibzadeh was quoted by Agence France-Presse (AFP).

"The government has shown its willingness and seriousness by sending a quality team known to all. If the other side shows the same willingness, we will be on the right track to reach an agreement."

"If the United States comes to Vienna with the determination to break the deadlock and overcome the problems on which we did not agree in previous rounds, the path of dialogue will certainly be easier," he added.

According to Reuters, diplomats have said Washington has suggested negotiating an open-ended interim accord with Tehran as long as a permanent deal is not achieved. Failure to strike a deal could also prompt a reaction from Israel which has said military options would be on the table.

"The talks can't last forever. There is the obvious need to speed up the process," Moscow's envoy Ulyanov said on Twitter.