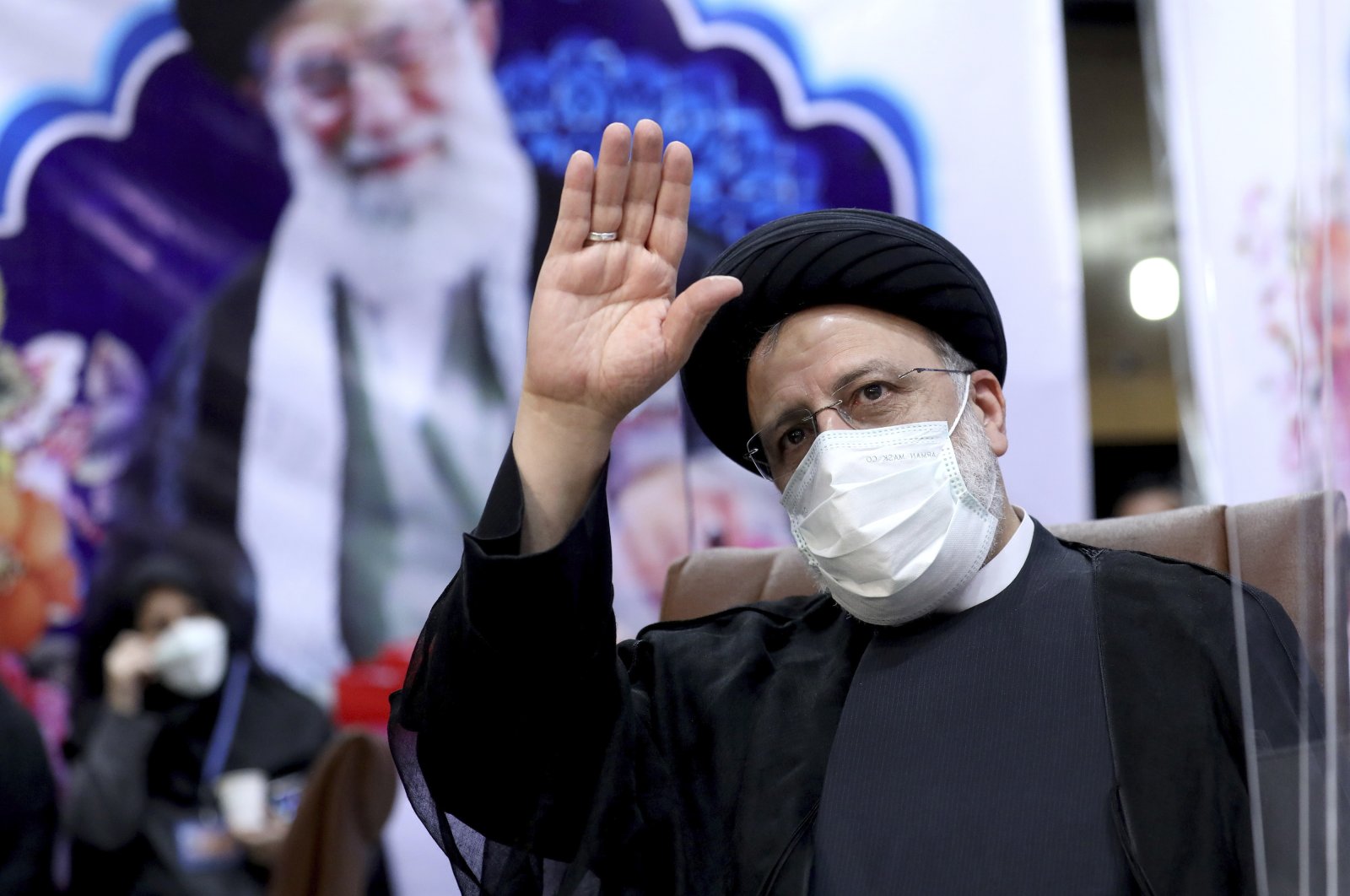 Ebrahim Raisi, then head of Iran's judiciary, waves to journalists while registering his candidacy for the upcoming presidential elections, in Tehran, Iran, May 15, 2021. (AP Photo)
by French Press Agency - AFP Aug 03, 2021 10:11 am
RECOMMENDED

Ebrahim Raisi was Tuesday inaugurated as president of Iran, a country whose hopes of shaking off a dire economic crisis hinges on reviving a nuclear deal with world powers.

"Following the people's choice, I task the wise, indefatigable, experienced and popular Hojatoleslam Ebrahim Raisi as president of the Islamic Republic of Iran," Iran's supreme leader Ayatollah Ali Khamenei wrote in a decree read out by his chief of staff.

Raisi replaces moderate president Hassan Rouhani, whose landmark achievement was the 2015 nuclear agreement between Iran and six major powers. From the outset, Raisi will have to tackle negotiations aimed at reviving the nuclear deal from which the U.S. unilaterally withdrew imposing sweeping sanctions. Raisi, in his inauguration speech, said his government would seek to lift "oppressive" U.S. sanctions, but would "not tie the nation's standard of living to the will of foreigners."

The 60-year-old also faces the United States, Britain and Israel's warnings to Iran over a deadly tanker attack last week for which Tehran denies responsibility. Raisi won a presidential election in June in which more than half the electorate stayed away after many political heavyweights were barred from standing. A former judiciary chief, he has been criticized by the West for his human rights record.

Traffic limitations were in force on streets around the inauguration venue with domestic air travel to and from the capital banned for two hours, media reports said. Tuesday's ceremony marked Raisi's formal accession to office. He will then be sworn in before parliament on Thursday when he is to submit his proposed government line-up.

Raisi's presidency will consolidate power in the hands of conservatives following their 2020 parliamentary election victory, marked by the disqualification of thousands of reformist or moderate candidates. Last month, he called on parliament for "cooperation" to increase Iranians' hope in the future.

"I am very hopeful for the country's future and confident that it is possible to overcome difficulties and limitations," he said at the time. Iran's economic woes, exacerbated by U.S. sanctions, will be the new president's top challenge, said Clement Therme, a researcher at the European University Institute in Italy.

"His main objective will be to improve the economic situation by reinforcing the Islamic republic's economic relations with neighboring countries" and others such as Russia and China, Therme said.

The 2015 deal saw Iran accept curbs on its nuclear capabilities in return for an easing of sanctions. But then U.S. President Donald Trump withdrew from the accord three years later and ramped up sanctions again, prompting Tehran to pull back from most of its nuclear commitments.

Trump's successor Joe Biden has signaled his readiness to return to the deal and engaged in indirect negotiations with Iran alongside formal talks with the accord's remaining parties – Britain, China, France, Germany and Russia.

The U.S. sanctions have choked Iran and its vital oil exports, and the economy contracted by more than 6% in both 2018 and 2019.

In the winter of 2017-2018, and again in 2019, street protests sparked by the economic crisis rocked the country. And last month, demonstrators in oil-rich Khuzestan province, which has been hit by drought, took to the streets to vent their anger. On the foreign front, tensions have escalated after the United States and Britain joined Israel in blaming Tehran for a tanker attack off Oman last Thursday that killed a British security guard and a Romanian crew member.

The United States vowed an "appropriate response," while Iran warned Monday that it will respond to any "adventurism." The economic malaise has been exacerbated by the coronavirus pandemic, which has officially cost more than 90,000 lives and also hit many Iranians in the pocket. In his final cabinet meeting on Sunday, Rouhani defended his track record but apologized over the "hardships" Iranians have had to endure.

After his election, Raisi made clear that his key foreign policy would be to improve ties with regional countries. In mid-July, Rouhani said he hoped his successor can clinch a deal to lift U.S. sanctions and conclude nuclear talks. But Khamenei, whose word is final in policy matters, has warned against trusting the West.

Raisi has already said he will not hold talks simply for the sake of negotiations. His government will only support talks that "guarantee national interests," the incoming president said. Six rounds of nuclear talks between Iran and world powers were held in Vienna between April and June. The last round concluded on June 20, and no date has been set for a resumption.