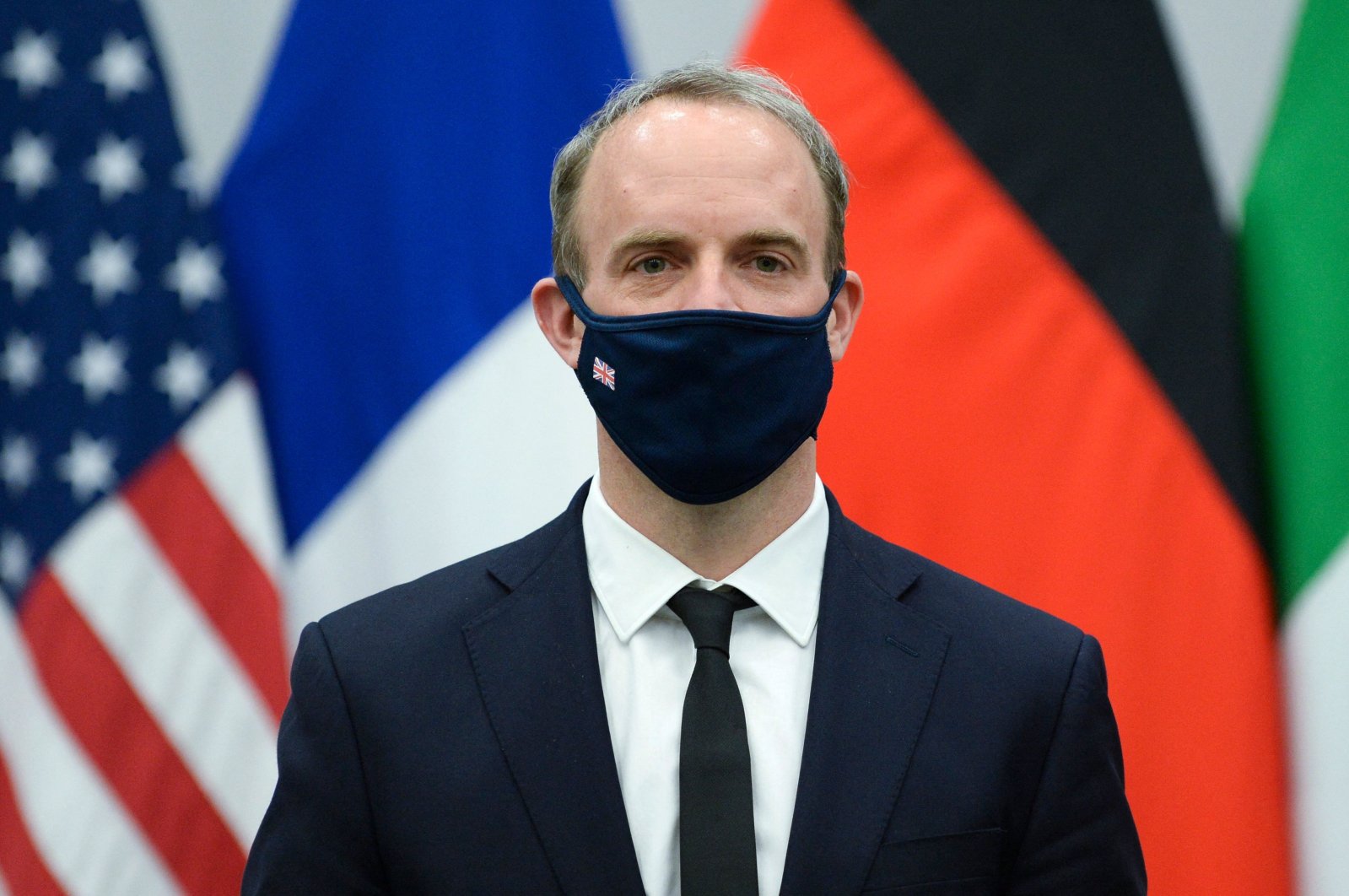 Britain's Foreign Secretary Dominic Raab wears a protective mask as he poses for a picture during a meeting at NATO's headquarters in Brussels, Belgium, April 14, 2021. (AFP Photo)
by Agencies Apr 18, 2021 1:41 pm
RECOMMENDED

The United Kingdom said Sunday that it "stands in full support" of its Czech allies after Prague expelled 18 Russian diplomats who had been identified as secret agents working for Russian intelligence services suspected of involvement in a 2014 ammunition depot explosion, which killed two people.

Czech police investigating the blast said they were looking for two men with Russian passports that had also been used by the suspects in the 2018 poisoning attempt on Russian double agent Sergei Skripal in Britain.

"The U.K. stands in full support of our Czech allies, who have exposed the lengths that the Russian intelligence services will go to in their attempts to conduct dangerous and malign operations in Europe," said British Foreign Secretary Dominic Raab in a statement, according to remarks carried by Agence France-Presse (AFP). "This shows a pattern of behavior by Moscow, following the Novichok attack in Salisbury."

"We are as determined and committed as ever to bring those responsible for the attack in Salisbury to justice, and commend the actions of the Czech authorities to do the same," Raab added, calling on Russia to "desist from these actions, which violate the most basic international norms."

Britain Thursday said it had summoned the Russian ambassador in the U.K., Andrei Kelin, to express its deep concern at what it called Moscow's "pattern of malign activity." Kelin Sunday told the BBC's Andrew Marr Show that he "hadn't seen Secretary Raab for more than a year."

"When I have come here a year and some months ago, I was full of aspirations that we can do better but in the recent year our relations has become worse," he said, adding that Moscow was analyzing United States President Joe Biden's proposition for a summit to ease growing tensions on Russia's border with Ukraine.

"There is no decision about the summit on our side, we will be analyzing the situation, waiting for what's going to happen," he said, and added, "I don't think" the situation is close to war. "We are fully committed to an idea of the Minsk agreements," he said.

The Czech Republic said Sunday it had informed NATO and European Union allies about suspected Russian involvement in a 2014 explosion and the matter would be addressed at an EU foreign ministers' meeting Monday.

The expulsions and allegations by the Czechs have triggered its biggest dispute with Russia since the 1989 end of communist rule when Prague was under Moscow's domination for decades.

The incident comes amid Western concern over a huge Russian military build-up on Russia's Western borders and in Crimea, which Moscow annexed from Ukraine in 2014, following an increase in fighting between Russian-backed separatists and government forces in eastern Ukraine.

On Sunday, the EU's executive commission confirmed remarks by acting Czech Foreign Minister Jan Hamacek on Twitter that the dispute with Russia would be addressed during a previously scheduled EU foreign ministers' video conference Monday.

Separately, Czech police said they were searching for two men in connection with serious criminal activity who were carrying Russian passports in the names of Alexander Petrov and Ruslan Boshirov, and that the men were in the country in the days leading up to the 2014 explosion.

The U.S. said it stood in solidarity with the Czech Republic in the dispute with Russia. The U.S. Embassy in Prague said in a statement Saturday that Washington appreciated the Czech Republic's "significant action to impose costs on Russia for its dangerous actions on Czech soil."

The U.S. imposed sanctions against Russia Thursday for interfering in last year's U.S. election, cyber hacking, bullying Ukraine and other alleged malign actions, prompting Moscow to retaliate. Last month Biden said he thought his Russian counterpart Vladimir Putin was a "killer" and Moscow recalled its ambassador to Washington for consultations.

The incident surfaced unexpectedly at a time that is sensitive for Czech-Russia relations. The Czech government is planning to open a tender worth billions of euros to build a new nuclear power station, and security services have demanded that Russia be excluded from bids as a security risk.

President Milos Zeman and other senior officials have been arguing for keeping Russia in. The industry minister said Saturday that the incident could affect the process. The head of the country's upper house of parliament, Milos Vystrcil, said the incident would amount to state terrorism.

"If confirmed, we have to consider it as a very serious act of aggression and hostility, which can be labeled as an act of state terrorism," Vystrcil, member of the center-right opposition, told a news conference Sunday.