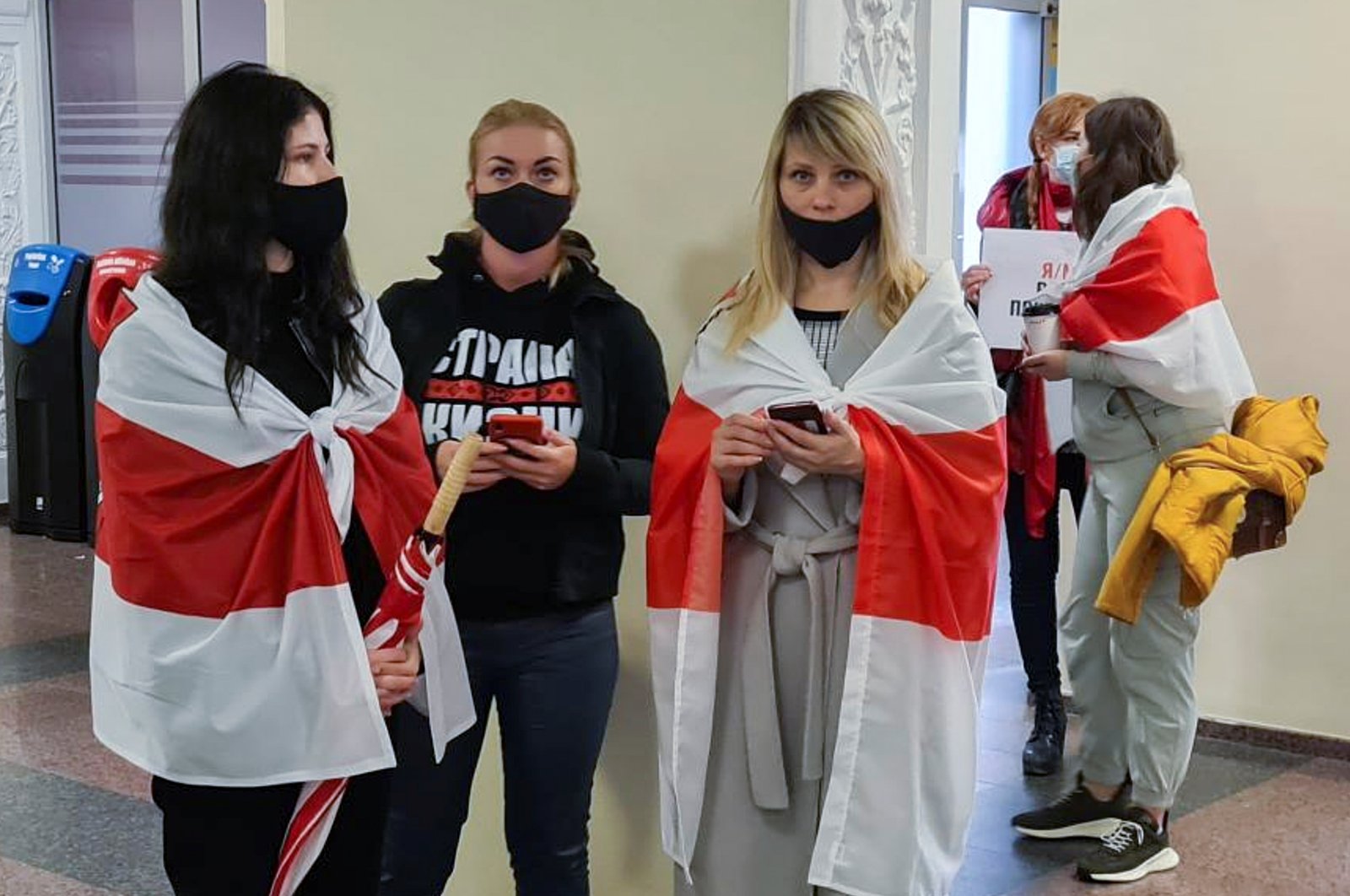 Supporters of Belarusian opposition blogger and activist Roman Protasevich wait for the arrival of a Ryanair flight after it was diverted to Belarus at Vilnius Airport in Vilnius, Lithuania May 23, 2021. (Reuters Photo)
by Agencies May 24, 2021 3:18 pm
RECOMMENDED

The European Union on Monday summoned the Belarusian ambassador to condemn the "inadmissible" forced landing of a commercial flight and subsequent detention of a critical journalist.

"Ambassador (Aleksandr) Mikhnevich was informed of the firm condemnation by the EU institutions and EU member states of the coercive act by which the Belarusian authorities have jeopardized the safety of passengers and crew," a statement said, ahead of a summit of EU leaders set to discuss sanctions.

Foreign Secretary Dominic Raab on Monday said Britain had also summoned the Belarusian ambassador in London to register anger at the forced landing of a civilian jet. Raab blamed the country's strongman leader Alexander Lukashenko, calling the incident "reprehensible", and a "flagrant breach of international law", adding that London was mulling further sanctions and "exploring every potential international option".

Germany followed Britain and asserted that "the explanations of the Belarusian government for the forced landing of a Ryanair plane in Minsk are absurd and not credible".

"We need clarity on what really happened on board and on the ground," Foreign Minister Heiko Maas said in a statement, adding that ambassador Denis Sidorenko was expected at his ministry Monday evening.

Maas said Berlin also expected "clarity about the wellbeing" of the detained journalist, Roman Protasevich, and his girlfriend, saying both "must be released immediately". He added a senior official at the ministry, Miguel Berger, would meet with Sidorenko, while EU leaders debate "consequences" at a summit in Brussels.

Meanwhile, Lithuania on Monday said it would not authorize any departing or arriving flights that cross Belarusian airspace, while the European Union is considering shunning the country's airspace and banning national carrier Belavia from EU airports after Minsk forced a Vilnius-bound Ryanair plane to land.

"Any flights to or from Lithuanian airports via Belarusian airspace are prohibited" from Tuesday, Transport Minister Marius Skuodis told a government meeting in the capital Vilnius, according to remarks carried by Agence France-Presse (AFP).

The Lithuanian government also advised its citizens to refrain from traveling to Belarus and urged those currently in the country to leave immediately, Foreign Minister Gabrielius Landsbergis said on Monday. Speaking during a cabinet meeting, Landsbergis said Sunday's action by Belarus reflected a worsening security situation in the region.

EU leaders strongly condemned Belarus over Sunday's incident, in which a flight from Greece to Lithuania was diverted and a dissident journalist who was on board the plane was arrested. They will discuss tightening sanctions already in place against Minsk at a summit on Monday evening, and could also restrict ground transit links between Belarus and the 27-nation EU.

"Together with international partners, we will work to close the airspace of Belarus to international flights," Lithuanian Prime Minister Ingrida Simonyte said on Monday.

France's Europe Minister, Clement Beaune, called the plane's forced diversion "an act of state piracy that cannot be left unpunished," and proposed tougher sanctions against Belarus. "We are working on a package of measures that go beyond sanctions against individuals" and may also suspend ground transit links with the EU, French President Emmanuel Macron's office said.

The EU has blacklisted 88 individuals and seven companies accused of "repression and intimidation" following protests against veteran leader Lukashenko's victory in a presidential election last year that opponents say was rigged.

The sanctions also include a ban on travel to the EU for Lukashenko and his son, and the freezing of any assets they have in EU member states.

"We could extend these sanctions to other officials," Beaune told BFM Television, suggesting an airspace ban would be a "reasonable protective measure because Europeans' lives were put at risk."

Journalist Roman Protasevich and his girlfriend were detained at Minsk airport on Sunday after Ryanair flight FR4978 was diverted from its Athens-to-Vilnius route after what Belarus alleged was a bomb threat. The forced landing of a commercial flight carrying more than 120 civilians between two EU nations sparked international condemnation .

EU foreign policy chief Josep Borrell called for the release of opposition-minded journalist Roman Protasevich, who was detained onboard the plane, and an investigation into whether international aviation rules were violated.

Latvian airline airBaltic has already said it will no longer use Belarusian airspace for its flights.

Outrage over the Belarus incident is likely to spill over into a discussion the EU leaders were due to have at the long-arranged summit about where to take their fraught relationship with Moscow, which has long stood behind Lukashenko.

The EU has trod warily on imposing sanctions on Belarus because of the risk that it would push Lukashenko into even closer ties with Russia.

"It's not so easy to calibrate sanctions if you want to spare the population," a senior EU diplomat said on possible new measures against Minsk, according to Reuters.