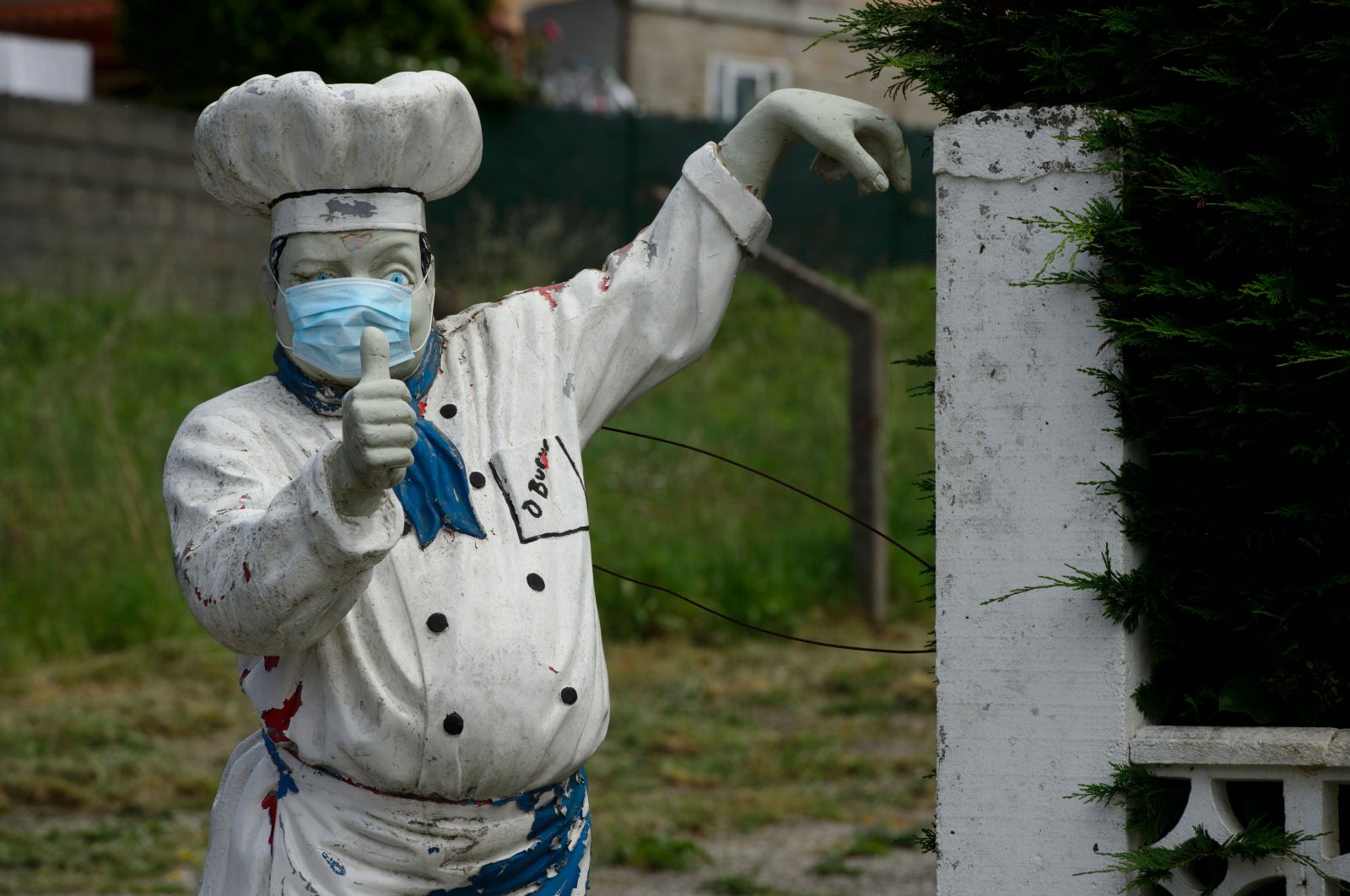 A statue of a cook wearing a face mask is pictured outside a restaurant in Vigo, on May 10, 2020 during the national lockdown to prevent the spread of the COVID-19 disease. (AFP Photo)
by French Press Agency - AFP
May 10, 2020 8:53 pm

Millions of people in France and Spain counted down to the relaxation of strict coronavirus lockdowns on Monday, hopes of release from their homes laced with fears of a second wave of a pandemic that has killed over 280,000 worldwide and wrought economic disaster.

In France, people will be able to walk outside for the first time in nearly eight weeks without filling in a permit, teachers will start to return to schools, and some shops will reopen.

Bars, restaurants, theatres and cinemas will, however, remain closed.

Spaniards outside of urban hotspots such as Madrid and Barcelona – which remain under lockdown – eagerly made plans to meet friends and family in bars and restaurants that have outdoor spaces. But the anticipation of regained freedom was tinged by concern.

With millions out of work and economies flatlining – including in the United States, where 20 million lost their jobs in April – governments are desperate to reopen, but most are choosing a gradual approach.

European officials have been emboldened by declining death rates – France's toll of 70 on Sunday was its lowest since early April and Spain's daily fatalities have dropped below 200.

But the risk of a second wave was underscored by a resurgence in South Korea, widely praised for its handling of an initial outbreak but now forced to shut all bars and clubs in the capital Seoul after a cluster of infections was confirmed

China reported the first infection in over a month on Sunday in Wuhan, where the outbreak first started late last year before it went on to infect more than 4 million worldwide.

And in Germany there was uncertainty too with at least one district forced to reimpose restrictions after an outbreak at a meat processing plant.

"We have already set a date for dinner on Wednesday, just 10 of us. I can't wait to touch someone, to kiss and be kissed," said 66-year-old professor Beatriz Gonzalez in the Spanish city of Las Palmas in the Canary Islands.

Belgium, Germany and Greece are among other European nations set to ease lockdowns on Monday.

Turkey had already eased some restrictions and let over-65s out for the first time on Sunday.

"It's the first time I've come outside since March and I'm so happy, I'm filled with joy," an Ankara resident named Ayşe told Agence France-Presse (AFP).

The Middle East's most-affected country, Iran, has also relaxed its lockdown measures and bazaars and shopping centers in the capital Tehran were bustling again after being nearly deserted for weeks.

But health ministry spokesman Kianoush Jahanpour warned the situation "should in no way be considered normal," as one region recorded a spike in death rates and reimposed a lockdown.

And the resumption of league football in Europe was dealt a blow after confirmation of clusters of infections among players in Spain, Germany and Portugal.

Football bosses in all three countries, however, insisted that season restarts planned for the coming weeks were still on track.

As some of the hardest-hit countries prepare to relax their restrictions, Britain's recovery remained slightly behind its European counterparts.

Prime Minister Boris Johnson was due to announce his vision for exiting lockdown later on Sunday, which will reportedly include mandatory 14-day quarantining for all international arrivals.

Even further behind are Russia and Brazil, which both passed grim milestones on Sunday.

Russia's caseload surpassed 200,000 and is expected to become the highest figure in Europe within days, even as the number of deaths remains relatively low at fewer than 2,000.

While officials say the figures reveal the effectiveness of Russia's testing regime, an opposition-allied doctors union said the authorities were underreporting deaths of medics.

For Brazil, the signs are more ominous.

Officials confirmed more than 10,000 had now died in the hardest-hit Latin American country but scientists warned that the real figures could be many times higher, given a lack of widespread testing.

In a sign that officials were not yet facing up to the crisis, President Jair Bolsonaro, who has likened the coronavirus to a "little flu" and criticized regional lockdowns, was reportedly seen jet skiing.

Bolsonaro and his ally President Donald Trump have repeatedly called for their economies to be reopened even as the virus spreads through their populations – more than 1,000 people are dying each day in the .US.

The disease has also moved into the White House inner circle, with the U.S. government's top disease expert Anthony Fauci reportedly intending to self-isolate after possible exposure to an infected White House aide.

Americans are increasingly skeptical of Trump's record on the issue, more than half disapproving according to a poll average by RealClearPolitics on May 6.

He has also faced sharp criticism from his predecessor Barack Obama, who said in a leaked tape that Trump's handling of the crisis was an "absolute chaotic disaster."

But his advisers were out in force on Sunday, appearing on talk shows to push for an end to locally imposed lockdowns.

Treasury Secretary Steven Mnuchin told Fox that the real danger was not reopening, adding: "You're talking about what would be permanent economic damage to the American public."

Small anti-lockdown protests have meanwhile swept the globe, with some demonstrators arguing that such restrictions violate their rights.

Ten people were arrested and a police officer injured in the Australian city of Melbourne on Sunday in the latest such protest, where around 150 people gathered.

Participants were promoting conspiracy theories including linking the 5G mobile network to the disease.

Australian chief medical officer Brendan Murphy said there was "a lot of very silly misinformation out there," adding: "It is complete nonsense. 5G has got nothing at all to do with coronavirus."