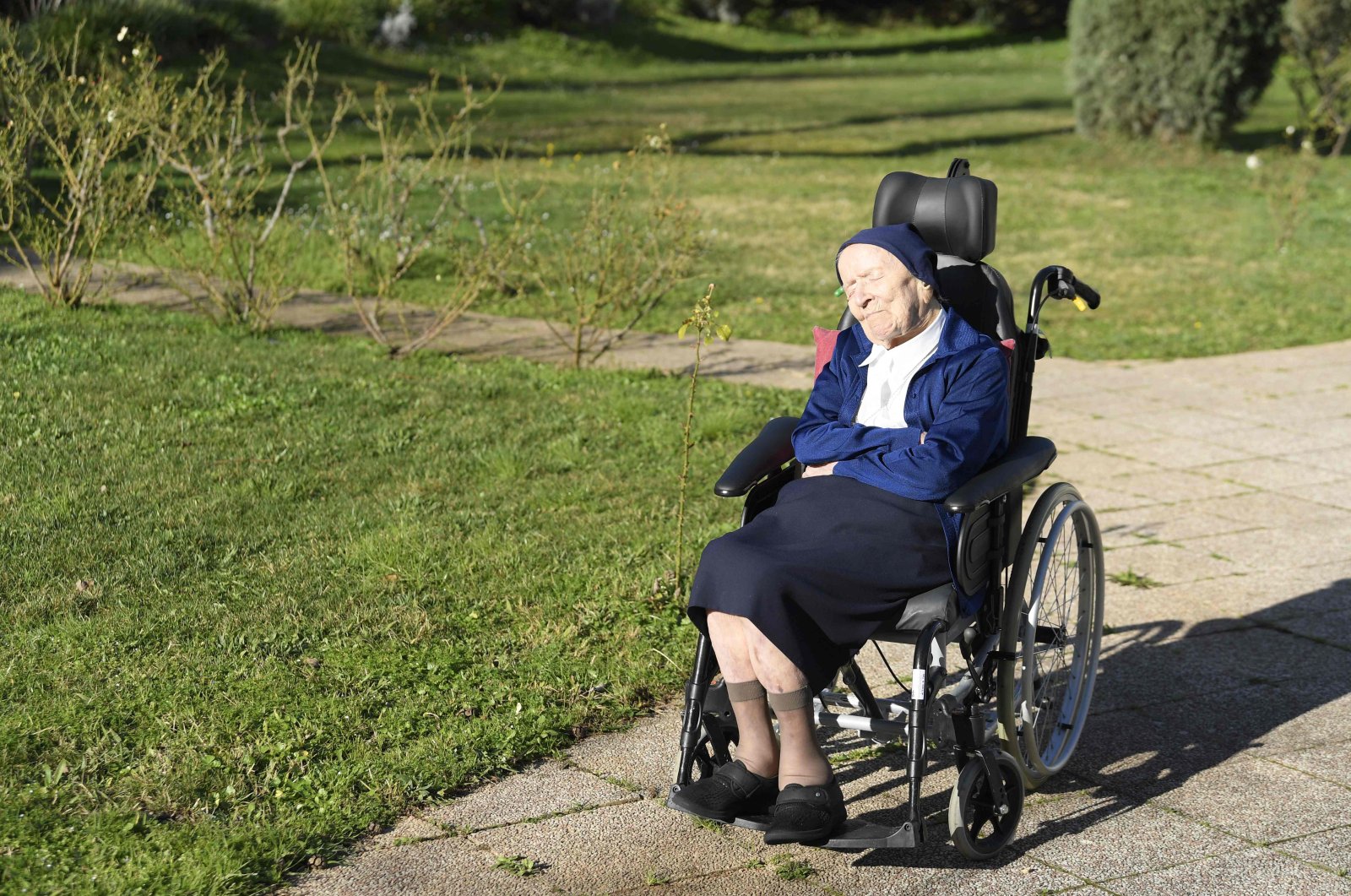 Sister Andre, Lucile Randon in the registry of birth, the eldest French and European citizen, sits in a wheelchair on the eve of her 117th birthday, in an EHPAD (Housing Establishment for Dependant Elderly People) in Toulon, southern France. (AFP Photo)
by French Press Agency - AFP Feb 11, 2021 8:58 am
RECOMMENDED

Born Lucile Randon on Feb. 11, 1904, Sister Andre said she didn't realize she had caught the coronavirus, which infected 81 residents of her retirement home in the southeast city of Toulon, killing 10 of them. Nursing homes around the world have been ravaged by the pandemic.

"I'm told that I got it," the nun told Agence France-Presse (AFP) ahead of her birthday. "I was very tired, it's true, but I didn't realize it."

David Tavella, a spokesperson for the Sainte-Catherine-Laboure nursing home, said she had "experienced a triple confinement: in her wheelchair, in her room and without a visit."

"So her birthday, it reinvigorates us," he added, following the deadly outbreak.

Sister Andre said she was not going to do anything special for her 117th birthday, but the home is planning a celebration for her.

There will be a special mass at the home, which has a dozen nuns, and the chef is preparing a birthday feast of foie gras, capon fillet with porcini mushrooms and Sister Andre's favorite dessert: baked Alaska, washed down with a glass of port.

She says her favorite food is lobster and she enjoys a glass of wine.

"I drink a small glass of wine every day," Sister Andre said.

Born in Ales in a Protestant family, she grew up as the only girl among three brothers.

One of her fondest memories was the return of two of her brothers at the end of World War I.

"It was rare, in families, there were usually two dead rather than two alive. They both came back," she told AFP last year, on her 116th birthday.

She converted to Catholicism and was baptized at the age of 26. She joined the Daughters of Charity order of nuns at the relatively late age of 41.

Sister Andre was then assigned to a hospital in Vichy, where she worked for 31 years and then spent 30 years in a retirement home in the French Alps before moving to Toulon.

She is the second-oldest living person in the world, according to the Gerontology Research Group, after Japanese woman Kane Tanaka, who is 118.

Asked what she would say to young people, Sister Andre said, "Be brave and show compassion."

The coronavirus is notorious for targeting and sometimes killing the most elderly of society, but reports around the world of centenarians surviving the virus have brought hope amid the pandemic. In Turkey, a 105-year-old woman swiftly overcame COVID-19 in December, a feat that inspired the nation as it grapples with the deadly disease.