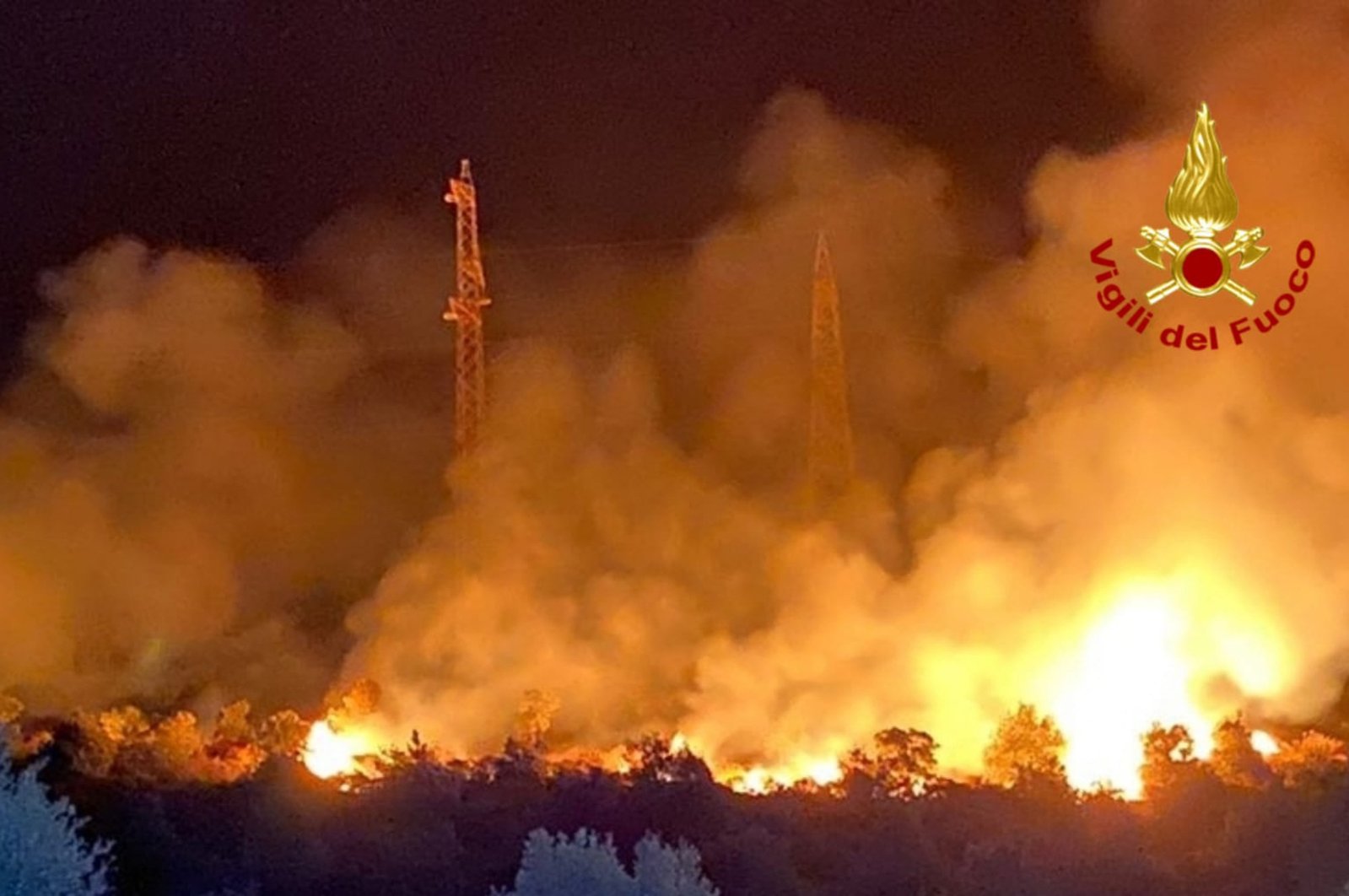 Firefighters combat the fire in rural areas near the countryside in the "Sa Ceraxia" territory of the municipality of Mandas, Sardinia, Italy, Aug. 12, 2021. (Photo by Italian Firefighters "Vigili del Fuoco" via AFP)
by Agencies Aug 12, 2021 12:45 pm
RECOMMENDED

Italian firefighters said Thursday they had battled more than 500 blazes overnight as another death was reported, taking the total toll linked to wildfires to four over the past week.

An anticyclone dubbed "Lucifer" is sweeping across Italy, sending temperatures soaring and causing what is believed to be a new European record of 48.8 degrees Celsius (119.8 degrees Fahrenheit) in Sicily on Wednesday.

Southern Europe has experienced intense heat waves and wildfires this summer, with deaths also recorded in Greece and Turkey, as experts warn that climate change increases the intensity and frequency of such extreme weather events.

The searing heat is due to continue in Italy for several days and risks fueling fires that have already plagued much of the country's south in recent weeks, notably in Sicily and the region of Calabria.

"If the data is validated, it could become the highest value ever recorded in Europe, beating the previous record of 48 degrees measured in Athens on July 10, 1977," meteorologist Manuel Mazzoleni wrote, according to Reuters.

The burned body of a 79-year-old man was found in the Reggio Calabria area on Wednesday, while another man, aged 77, died in the same region after trying to shelter his herd from the flames, news agencies reported.

Their deaths follow those of a 53-year-old woman and her 35-year-old nephew, also in Reggio Calabria, who died last Friday trying to save the family olive grove.

The fire service on Thursday morning reported making 528 interventions in the past 12 hours, 230 in Sicily, "where the situation is currently under control," including in the Madonie mountain range, near Palermo.

Regional authorities in Sicily have declared a state of emergency as a result of the fires, while 50 voluntary firefighting teams from around Italy have flown in to help battle the blazes.

The fire service reported 100 interventions overnight in Calabria, with particularly difficult blazes in the areas of Reggio Calabria, Catanzaro and Cosenza.

An anticyclone is an area of high atmospheric pressure that in summer brings dry, hot weather.

Across the Mediterranean, Algeria has also been hit by fires, with the North African country starting three days of mourning on Thursday after the death toll rose to 69.

The Mediterranean has been singled out as a "climate change hot spot," with increasing temperatures and aridity lengthening fire seasons and doubling the areas potential burnt, according to a draft U.N. assessment seen exclusively by Agence France-Presse (AFP).

Roberto Cingolani, the minister for ecological transition, said earlier that more than 70% of fires are caused by people.