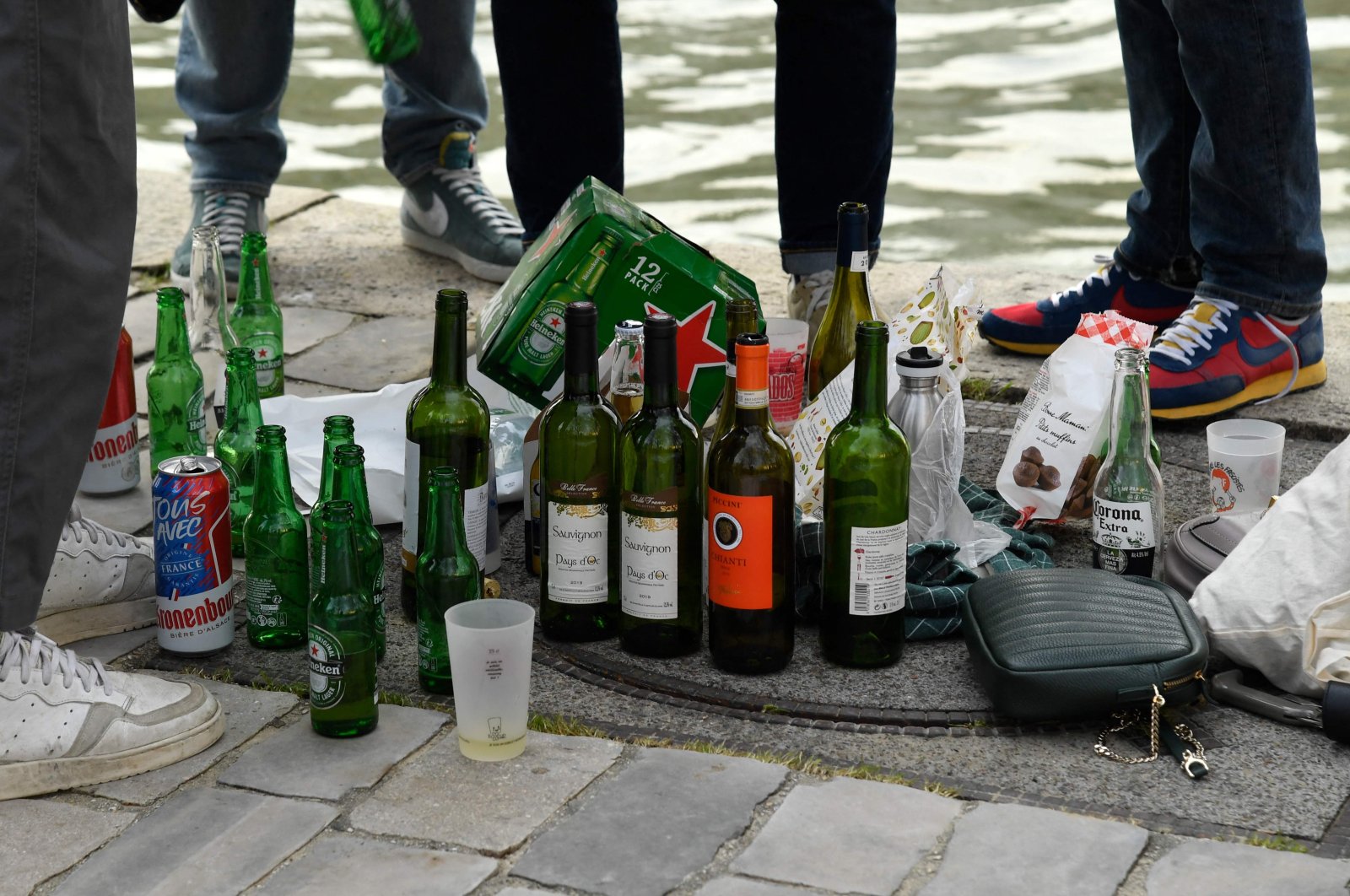 Empty bottles are seen on the ground as people have drinks on the banks of the Seine river on a sunny day amidst the coronavirus pandemic in Paris, France, Feb. 20, 2021. (AFP Photo)
by French Press Agency - AFP Apr 01, 2021 2:33 pm
RECOMMENDED

French Prime Minister Jean Castex announced Thursday that alcoholic beverages will be banned in French parks and other open public spaces as part of a new limited nationwide lockdown to stem the COVID-19 crisis.

Addressing the National Assembly, Castex also said authorities would be quick to disperse groups of more than six people on riverbanks or squares after the new restrictions unveiled by President Emmanuel Macron late Wednesday.

Castex said he "unreservedly" condemned people who had not been respecting the rules, after images of beer-swigging crowds on riverbanks under spring sunshine in cities including Paris and Lyon.

Meanwhile, prosecutors should "systematically" probe organizers of clandestine parties for putting the lives of others in danger, he added. By decreeing school closures and systematic work-from-home protocols, Macron hopes to ease pressure on hospitals facing a new surge in coronavirus cases that are overwhelming intensive care units.

But he refrained from demanding that people stay in their homes or avoid socializing completely and authorized travel between regions over the coming Easter weekend. The measures were met with a mix of resignation and anger, despite Macron's suggestion that France could begin envisioning a return to normalcy by mid-May.

Le Figaro headlined its front page Thursday, while mass-market Le Parisien said Macron was defending his strategy of "slowing without shutting down" even though "the situation has never been so dangerous or complicated."

As during the first lockdown last spring, parents are scrambling to make arrangements for another round of distance learning. "It was absolutely necessary to close the schools, even if it will be complicated for parents, and especially young children, to manage this situation," Laure, 44, a researcher with two young boys who lives in Paris, said after Macron's TV address.

In a bid to ease the pain, Macron shuffled the timetable for school holidays, and younger children will return to school on April 26 after taking their spring break, and older pupils will follow a week later.

Castex, who provided lawmakers with details of the new measures, said low-income families would receive financial aid for children no longer eating school lunches. Health Minister Olivier Veran said the number of new COVID-19 cases could peak in the next seven to 10 days, while intensive care cases in hospitals might top out by the end of April.

"The goal is to suppress this wave of the epidemic ... so that it's as small as possible," he told France Inter radio.