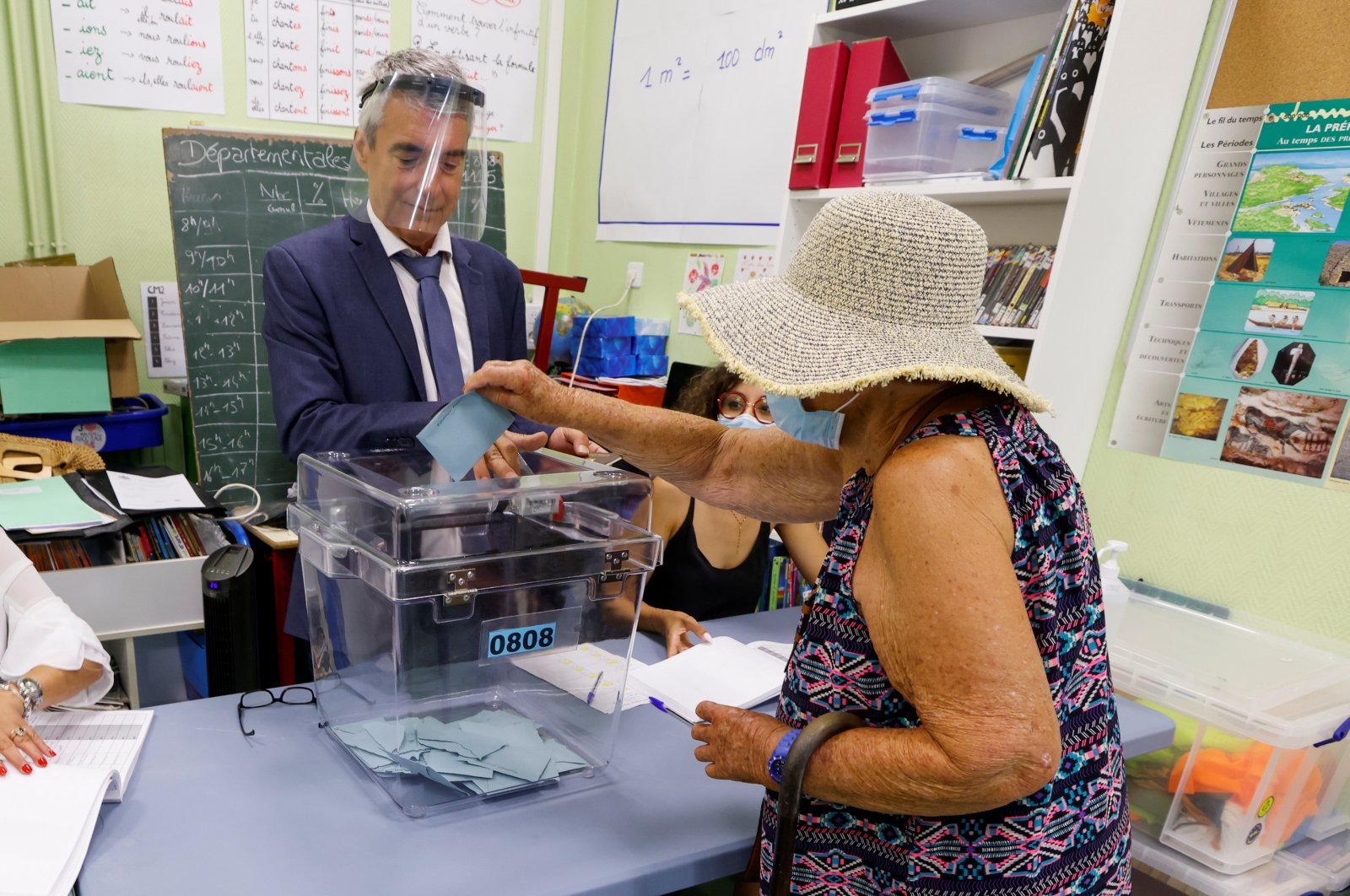 A woman casts her vote at a polling station during the second round of French regional and departmental elections, in Marseille, France, June 27, 2021. (Reuters Photo)
by French Press Agency - AFP Jun 27, 2021 10:26 am
RECOMMENDED

For some observers, the outcome of the June 20 first round raised doubts over whether the 2022 presidential election would come down to a duel between Macron and Le Pen in a runoff long seen as the most likely scenario.

The first round results marked a boost for the traditional right-wing Republicans as well as the Socialist Party, who have been squeezed after the centrist Macron surged into power in 2017 with his brand-new Republic on the Move (LREM) party.

Analysts warn against too much extrapolation onto a nationwide scale from the results of the regional elections, which choose the heads of France's 13 mainland regions from Brittany in the northwest to the Provence-Alpes-Cote d'Azur (PACA) region in the southeast.

But there was cross-party concern over the turnout for last week's polls, which were shunned by 66.72% of voters – a record in modern France.

"What we are seeing is the culmination of a disconnection between voters and the political class," said Jessica Sainty, a politics lecturer at Avignon University, while acknowledging the COVID-19 crisis also played a role in the high abstention rate.

The woeful turnout prompted a debate over how to improve participation, with several figures including government spokesperson Gabriel Attal suggesting electronic voting could help in the future.

According to a poll published Thursday, just 36% of voters plan to cast their ballots on Sunday. "France is sulking," the Le Parisien newspaper said.

One of the most closely watched races on Sunday will be whether RN candidate Thierry Mariani can defeat his right-wing rival Renaud Muselier in the region.

Gaining control of a region for the first time would be a huge boost for Le Pen as she seeks to convince voters that the RN – which she has reformed and rebranded since taking over from her firebrand father Jean-Marie – is a serious party of power.

Muselier could be helped by the withdrawal of left-wing candidates in a repeat of the "Republican Front" seen in past presidential elections to block the far-right.

"The idea of a victory for Mariani – even if it is far from being probable – would show that the RN can almost triumph alone over the coalition of all the others and head the powerful executive of a modern region," said Jerome Sainte-Marie, president of the Pollingvox Institute.

Mariani has been accused by critics of being an admirer of authoritarians like Russian President Vladimir Putin and Syrian leader Bashar Assad. Prime Minister Jean Castex warned last week that a Mariani victory would be "very serious" for the country.

The RN also came up short in the Ile-de-France region that includes Paris, where its 25-year-old rising star Jordan Bardella failed to trouble right-wing incumbent Valerie Pecresse, who is now expected to easily win the second round.

The first round results made even more unpalatable reading for Macron and his LREM, confirming the party's failure to put down local and regional roots despite controlling the presidency and lower house of parliament.

Despite sending several ministers to campaign and Macron himself embarking on a nationwide tour – which saw him slapped by an onlooker at one point – in some regions LREM did not muster the required 10% to make round two.

"2022: What if it wasn't them?" asked the headline in the left-wing Liberation newspaper over a picture of Macron and Le Pen.

LREM has almost no chance of winning control of a single region and is currently just number five among political parties in France.

The Socialists are expected to pick up some regions, partly due to support from the far-left France Unbowed party.

"LREM lacks a local presence, but in 2017 that did not prevent them from winning the presidential and legislative elections," said Sainty.