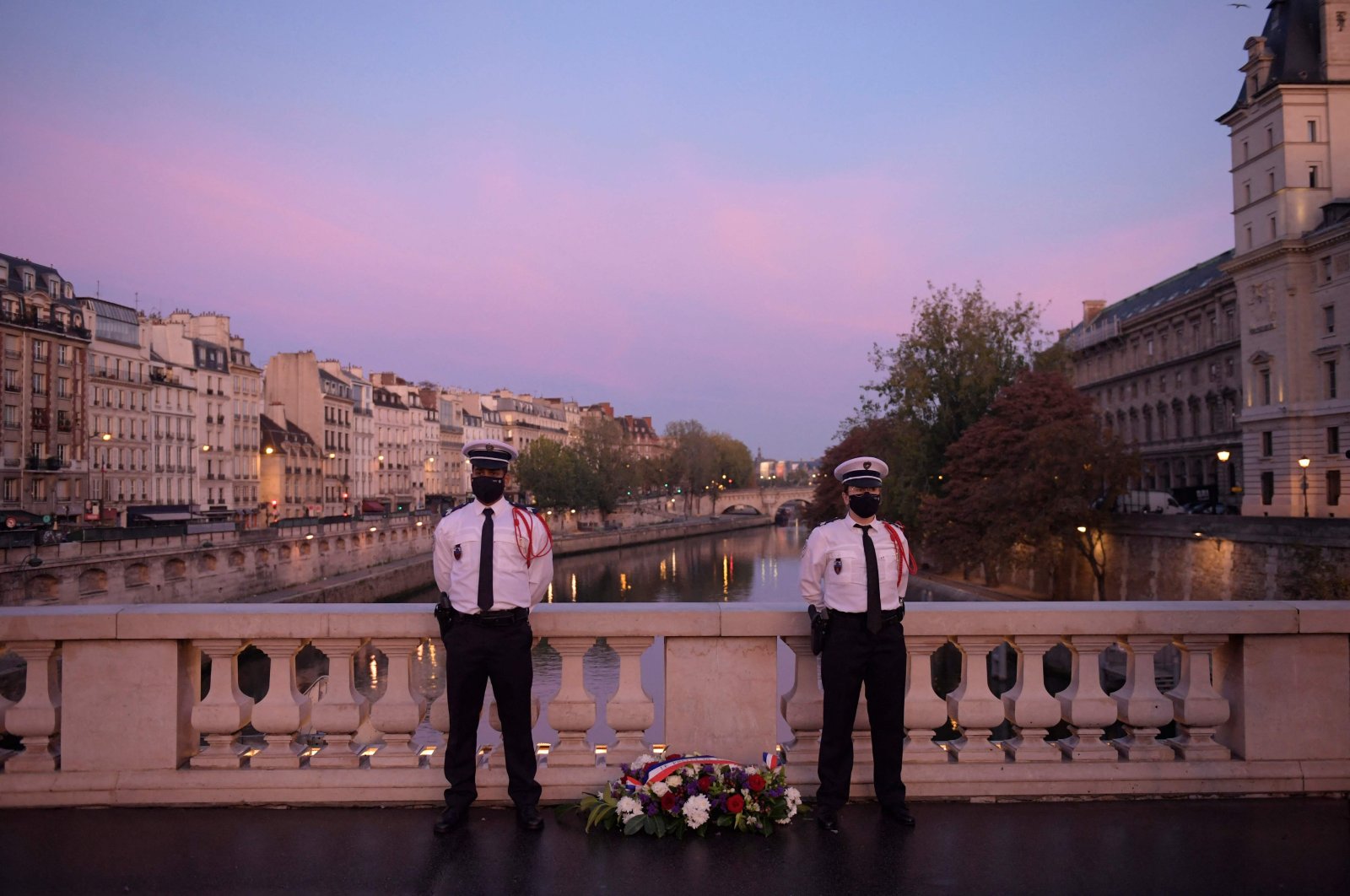 Police officers stand near a wreath of flowers on the Saint Michel bridge during a ceremony to commemorate France's brutal repression of an Oct. 17, 1961, anticolonialism demonstration where at least 120 Algerians were killed, Paris, France, Oct. 17, 2021. (AFP Photo)
by ASSOCIATED PRESS Oct 17, 2021 1:28 pm
RECOMMENDED

A tribute march was organized Sunday in Paris for the 60th anniversary of the French police's bloody crackdown on a protest by Algerians in the French capital during the final year of their country’s independence against colonial France.

The commemoration comes after French President Macron acknowledged that the "crimes” committed on Oct. 17, 1961 – which authorities have sought to cover up for decades – were "inexcusable for the Republic.”

About 12,000 Algerians were arrested and dozens were killed, "their bodies thrown into the Seine River,” the president's office said. Historians say at least 120 protesters were killed, some shot and some drowned, according to Macron's office. The exact number has never been established as archives remain partially closed by the French government.

Papon later became the highest-ranking Frenchman convicted of complicity in crimes against humanity for his role in deporting Jews during World War II. Human rights and anti-racism groups and Algerian associations in France staged a tribute march in Paris on Sunday afternoon.

They called on authorities to further recognize the French state's responsibilities in the "tragedies and horrors” related to Algeria's independence war and to further open up archives.

Earlier Sunday, Paris Mayor Anne Hidalgo attended a tribute ceremony at the Saint-Michel bridge, in the capital's city center. Macron paid tribute to victims Saturday at the Bezons bridge over the Seine River in the northwest of Paris. He was the first president to attend a commemoration event for the massacre.

Earlier this year, he announced a decision to speed up the declassification of secret documents related to Algeria’s 1954-62 war of independence from France. The new procedure was introduced in August, Macron's office said.

The move was part of a series of steps taken by Macron to address France's brutal history with Algeria, which had been under French rule for 132 years until its independence in 1962.

In 2018, Macron formally recognized the responsibility of the French state in the 1957 death of a dissident in Algeria, Maurice Audin, admitting for the first time the French military’s use of systematic torture during the war.