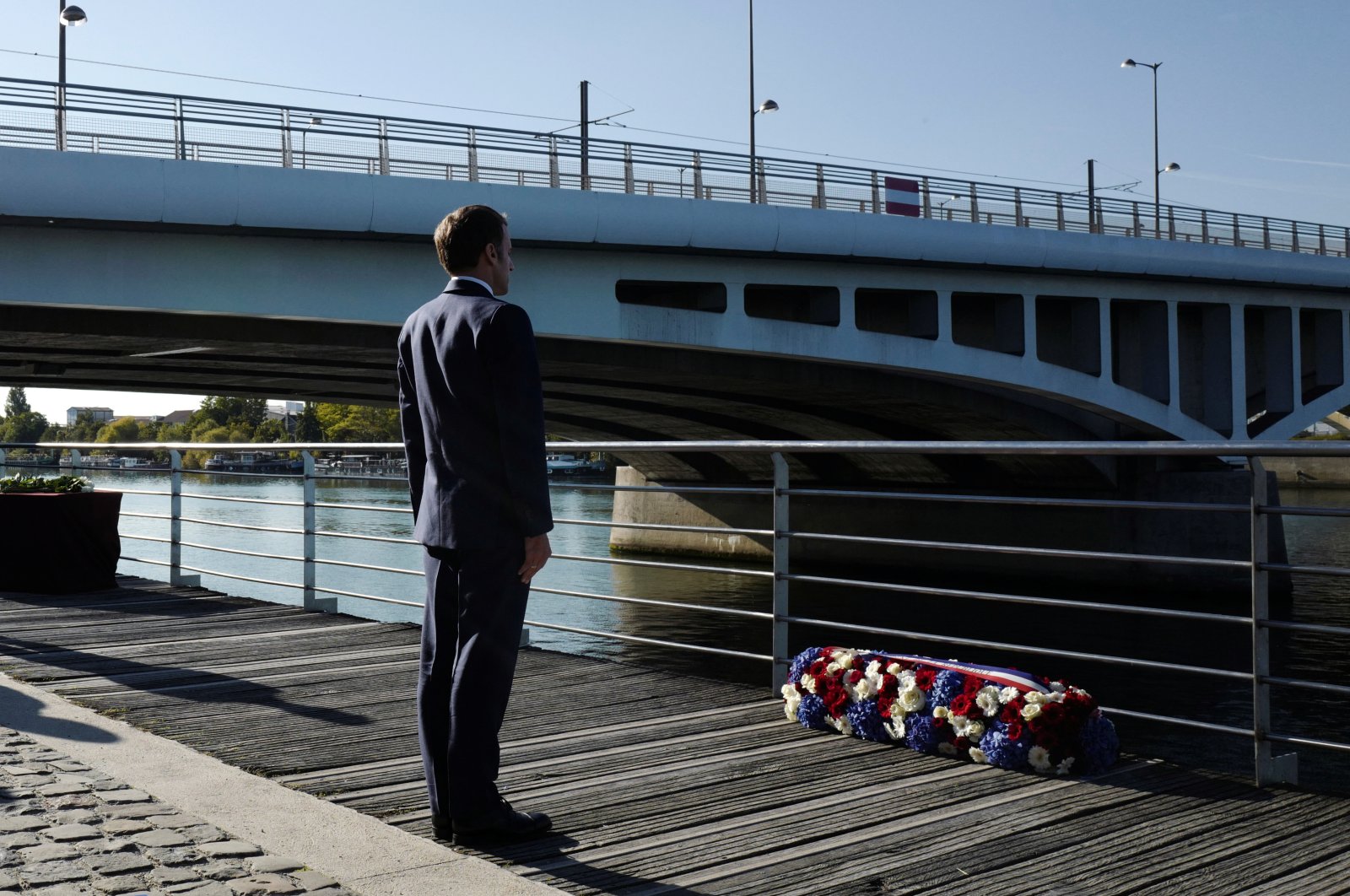 French President Emmanuel Macron stands at attention after laying a wreath near the Pont de Bezons during a ceremony commemorating the 60th anniversary of the massacre of Oct. 17, 1961, a murderous repression by the French police of a demonstration by Algerians in Paris during the violent decolonization process, in Colombes near Paris, France, Oct. 16, 2021. (Reuters Photo)
by French Press Agency - AFP Oct 16, 2021 6:35 pm
RECOMMENDED

French President Emmanuel Macron on Saturday condemned as "inexcusable" a deadly crackdown by Paris police on a 1961 protest by Algerians, an event covered up for decades by French authorities, amid souring relations between Paris and Algiers.

Macron told relatives and activists on the 60th anniversary of the bloodshed that "crimes" were committed on the night of Oct. 17, 1961 under the command of the notorious Paris police chief Maurice Papon.

He acknowledged that several dozen protesters had been killed, "their bodies thrown into the River Seine," and paid tribute to the memory of the victims.

The precise number of victims has never been made clear and some activists fear several hundred could have been killed.

Macron "recognized the facts: that the crimes committed that night under Maurice Papon are inexcusable for the Republic," the Elysee said.

"This tragedy was long hushed-up, denied or concealed," it added.

Macron, the first French president to attend a memorial ceremony for those killed, observed a minute of silence in their memory at the Bezons bridge over the Seine on the outskirts of Paris where the protest started.

His comments that crimes were committed went further than predecessor Francois Hollande, who acknowledged in 2012 that the protesting Algerians had been "killed during a bloody repression."

However, as expected, he did not issue a formal apology. He also did not give a public speech, with the Elysee issuing only the written statement.

Papon was in the 1980s revealed to have been a collaborator with the occupying Nazis in World War II and complicit in the deportation of Jews. He was convicted of crimes against humanity but later released.

Algeria withdrew its ambassador to Paris for consultations, state TV reported, in a move that followed French President Emmanuel Macron's decision to cut visas by half and controversial remarks on Algerian politics and history.

The North African country's decision came three days after the French ambassador to Algiers was summoned to the foreign ministry to protest Paris' decision to reduce the number of visas granted to Algerian nationals. As the row was ongoing between France and Algeria, however, Macron added more fuel to the fire Thursday through a series of controversial remarks over the political situation in Algiers, minimizing his country's role in brutal colonization of the country and attempts to rewrite history.