France to open Rwandan genocide archive after report on failings 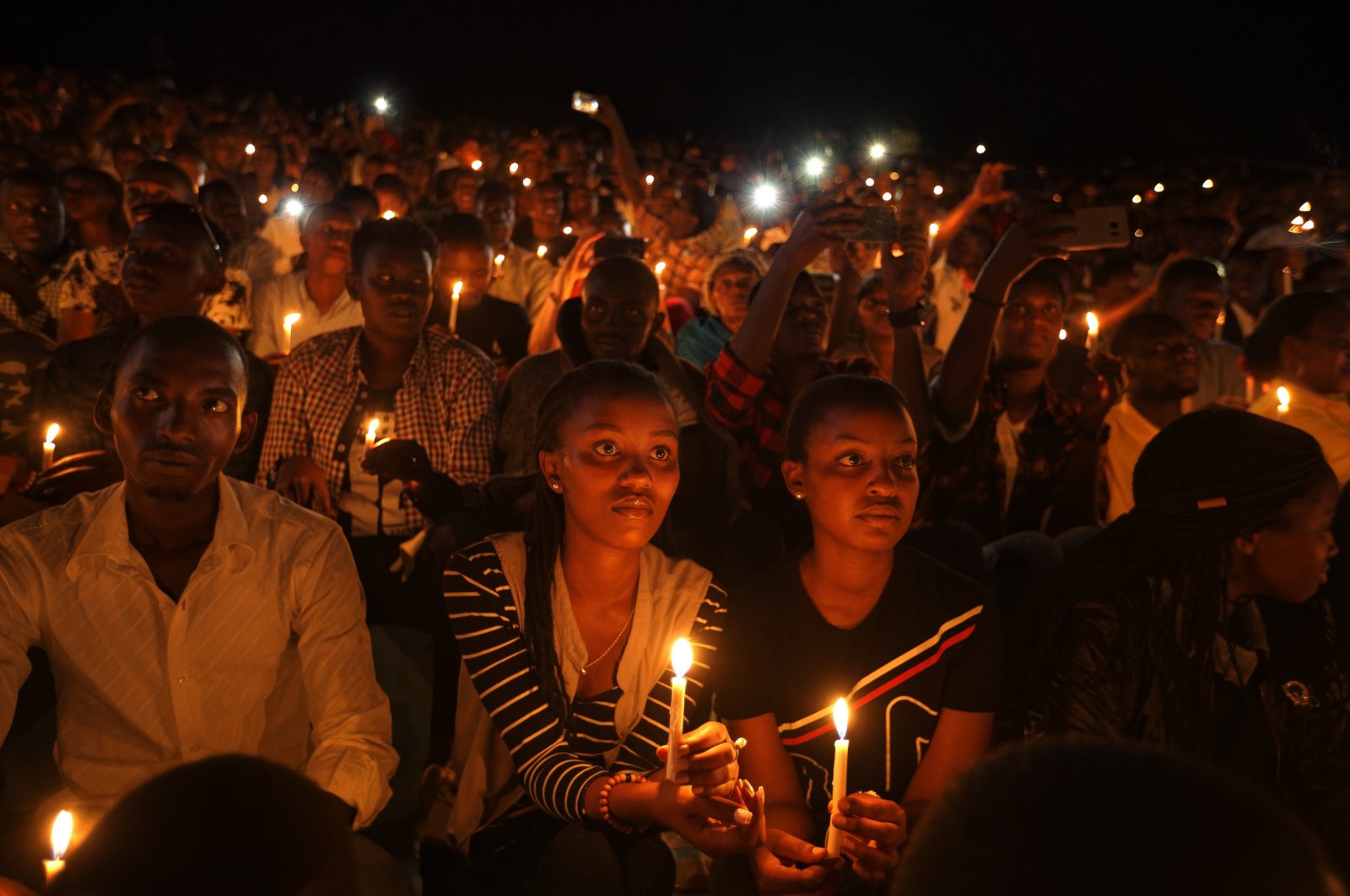 People attend a candlelight vigil during a memorial service marking 25 years since the 1994 Rwanda genocide, at Amahoro stadium in the capital Kigali, Rwanda, April 7, 2019. (AP Photo)
by ASSOCIATED PRESS
Apr 06, 2021 10:33 am

France will open an archive for the period covering the 1994 Rwandan genocide that killed more than 800,000 people as the country's role was highlighted in a report commissioned by French President Emmanuel Macron, with the lead author accusing French authorities of supporting violence and failing to protect civilians.

The report, published in March, concluded that French authorities remained blind to the preparations for genocide as they supported the "racist” and "violent” government of then-Rwandan President Juvenal Habyarimana and then reacted too slowly in appreciating the extent of the killings.

But it cleared them of complicity in the slaughter that left over 800,000 people dead, mainly ethnic Tutsis and the Hutus who tried to protect them.

Macron's decision to commission the report – and open the archives to the public – are part of his efforts to more fully confront the French role in the genocide and to improve relations with Rwanda, including making April 7, the day the massacre began, a day of commemoration.

While long overdue, the moves may finally help the two countries reconcile. Historian Vincent Duclert, who led the commission that studied France's actions in Rwanda between 1990 and 1994, told The Associated Press (AP) that "for 30 years, the debate on Rwanda was full of lies, violence, manipulations, threats of trials. That was a suffocating atmosphere.”

Duclert said it was important to acknowledge France’s role for what it was: a "monumental failure.” "Now we must speak the truth,” he added. "And that truth will allow, we hope, (France) to get a dialogue and a reconciliation with Rwanda and Africa.”

Macron said in a statement that the report marks "a major step forward” toward understanding France’s actions in Rwanda. About 8,000 archive documents that the commission examined for two years, including some that were previously classified, will be made accessible to the general public starting Wednesday, the 27th anniversary of the start of the killings.

Duclert said documents – mostly from the French presidency and the prime minister’s office – show how then-President Francois Mitterrand and the small group of diplomats and military officials surrounding him shared views inherited from colonial times, including the desire to maintain influence on a French-speaking country, that led them to keep supporting Habyarimana despite warning signs, including through delivery of weapons and military training in the years prior to the genocide.

"Instead of ultimately supporting the democratization and peace in Rwanda, the French authorities in Rwanda supported the ethnicization, the radicalization of (Habyarimana's) government," Duclert stressed.

France was "not complicit in the criminal act of genocide,” he said, but "its action contributed to strengthening (the genocide’s) mechanisms ... and that’s an enormous intellectual responsibility."

The report also criticized France’s "passive policy” in April and May 1994, at the height of the genocide. That was a "terrible lost opportunity,” Duclert noted. "In 1994, there was a possibility to stop the genocide ... and it did not happen. France and the world bear a considerable guilt.”

Eventually they did step in. Operation Turquoise, a French-led military intervention backed by the United Nations, started on June 22. Duclert said that France's "blindness must be questioned and, maybe, brought to trial,” though he insisted it was not the commission’s role to suggest charges.

The report was welcomed as an important step by activists who had long hoped France would officially acknowledge its responsibilities in the genocide. On a visit to Rwanda in 2010, then-French President Nicolas Sarkozy admitted that his country had made "errors of judgment” and "political errors" regarding the genocide – but the report may allow Macron to go further. Dafroza Gauthier, a Rwandan who lost more than 80 members of her family in the mass killing, welcomed it as "a great document against genocide denial.”

"For 27 years, or longer, we were in a kind of fog," said Gauthier, who with her husband, Alain, founded the Collective of Civil Plaintiffs for Rwanda, a French-based group that seeks the prosecution of alleged perpetrators of the genocide.

"The report is clearly stating things.” There also may be a shift in the attitude of Rwandan authorities, who welcomed the report in a brief statement but have given no detailed response. They said the conclusions of their own report, to be released soon, "will complement and enrich” it.

That’s different from Rwanda’s firm assertions of French complicity as recently as 2017. Relations between the two countries, strained for years since the genocide, have improved under Macron’s presidency. Felicien Kabuga, a Rwandan long wanted for his alleged role in supplying machetes to the killers, was arrested outside Paris last May. And in July an appeals court in Paris upheld a decision to end a years-long investigation into the plane crash that killed Habyarimana and set off the genocide.

That probe aggravated Rwanda’s government because it targeted several people close to President Paul Kagame for their alleged role, charges they denied. It now appears Rwandan authorities will accept "the olive branch” from Paris, said Dismas Nkunda, head of the watchdog group Atrocities Watch Africa who covered the genocide as a journalist. "Maybe they’re saying, ‘The past is the past. Let’s move on,’” he said of Rwandan authorities.

The Gauthiers said the report and access to the archives may also help activists in their efforts to bring people involved in the genocide to justice – including potentially French officials who served at the time. There have been three Rwandan nationals convicted of genocide so far in France, they stressed. Four others are expected to go on trial.

That's out of about 30 complaints against Rwandan nationals living in France that their group has filed with authorities. That's still "very few” compared to the more than 100 alleged perpetrators who are believed to live on French territory, they said.