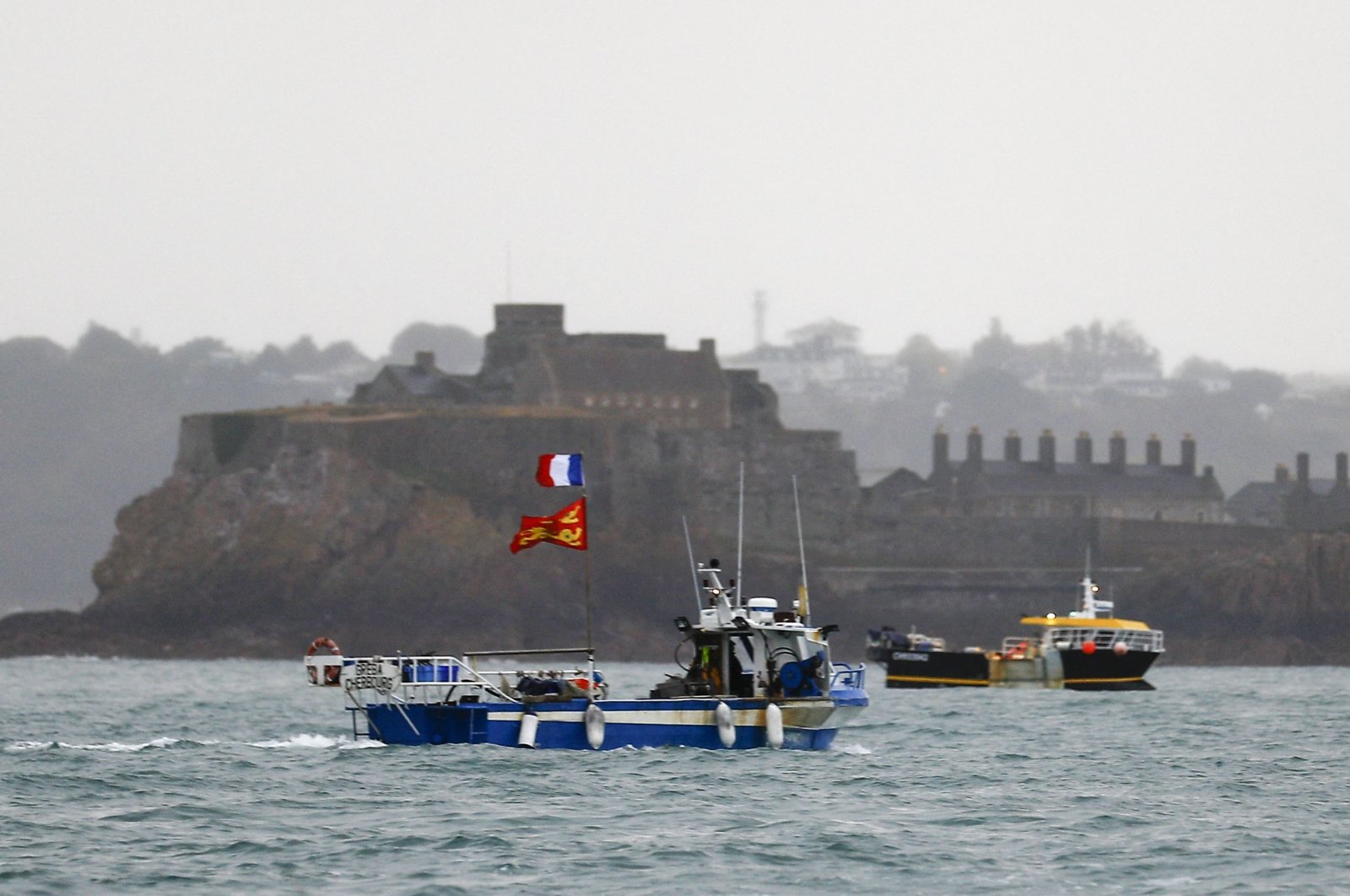 French fishing boats protest in front of the port of Saint Helier off the British island of Jersey to draw attention to what they see as unfair restrictions on their ability to fish in UK waters after Brexit, Jersey, United Kingdom, May 6, 2021. (AFP Photo)
by ASSOCIATED PRESS Oct 30, 2021 1:54 pm
RECOMMENDED

France and the United Kingdom were urged Saturday to end their latest spat over fishing rights in the English Channel, which threatens to escalate within days into a damaging French blockade of British boats and trucks.

French President Emmanuel Macron warned that the dispute is testing the U.K.’s international credibility, while both countries accused each other of being in breach of the post-Brexit trade agreement that Britain’s government signed with the European Union to facilitate the U.K.’s smooth departure from the bloc’s economic orbit at the start of the year.

The latest row stems from restrictions on permits that Britain placed on French fishing boats, which it says is related to a lack of paperwork. U.K. authorities have since issued dozens of permits and now the dispute comes down to just a few dozen French boats. But France argues it’s a matter of principle and wants to defend its interests as the two countries set out on a new, post-Brexit relationship.

France has threatened to block British boats crossing the English Channel and tighten checks on boats and trucks from Tuesday if the licenses are not granted. The British government has threatened to retaliate.

France has also suggested it might restrict energy supplies to the Channel Islands – British Crown dependencies that lie off the coast of France and are heavily dependent on French electricity.

Ahead of a meeting with British Prime Minister Boris Johnson this weekend on the sidelines of the Group of 20 summit of leaders in Rome, Macron defended France’s position in an interview with the Financial Times and argued that the fishing dispute could hurt Britain's reputation worldwide.

"Make no mistake, it is not just for the Europeans but all of their partners," Macron said. "Because when you spend years negotiating a treaty and then a few months later you do the opposite of what was decided on the aspects that suit you the least, it is not a big sign of your credibility,” Macron said he was sure that Britain has "good will” to solve the dispute. "We need to respect each other and respect the word that has been given," he said.

Jean-Marc Puissesseau, president and chairman of the northern French ports of Calais and Boulogne-sur-Mer, said the row was "ridiculous” and urged both sides to resolve it.

He told BBC radio that the dispute was over just 40 boats – "a drop in the ocean” – and that there would be "terrible” consequences if France carried out its threat of blocking British trawlers from French ports."If no agreement can be found, it will be a drama, it will be a disaster in your country because the trucks will not cross,” he said.

Johnson conceded that there was "turbulence” in the relationship with France and warned that his government was ready to retaliate if France pushed through with its threats.

"I am looking at what is going on at the moment and I think that we need to sort it out. But that is quite frankly small beer, trivial, by comparison with the threat to humanity that we face," Johnson added.