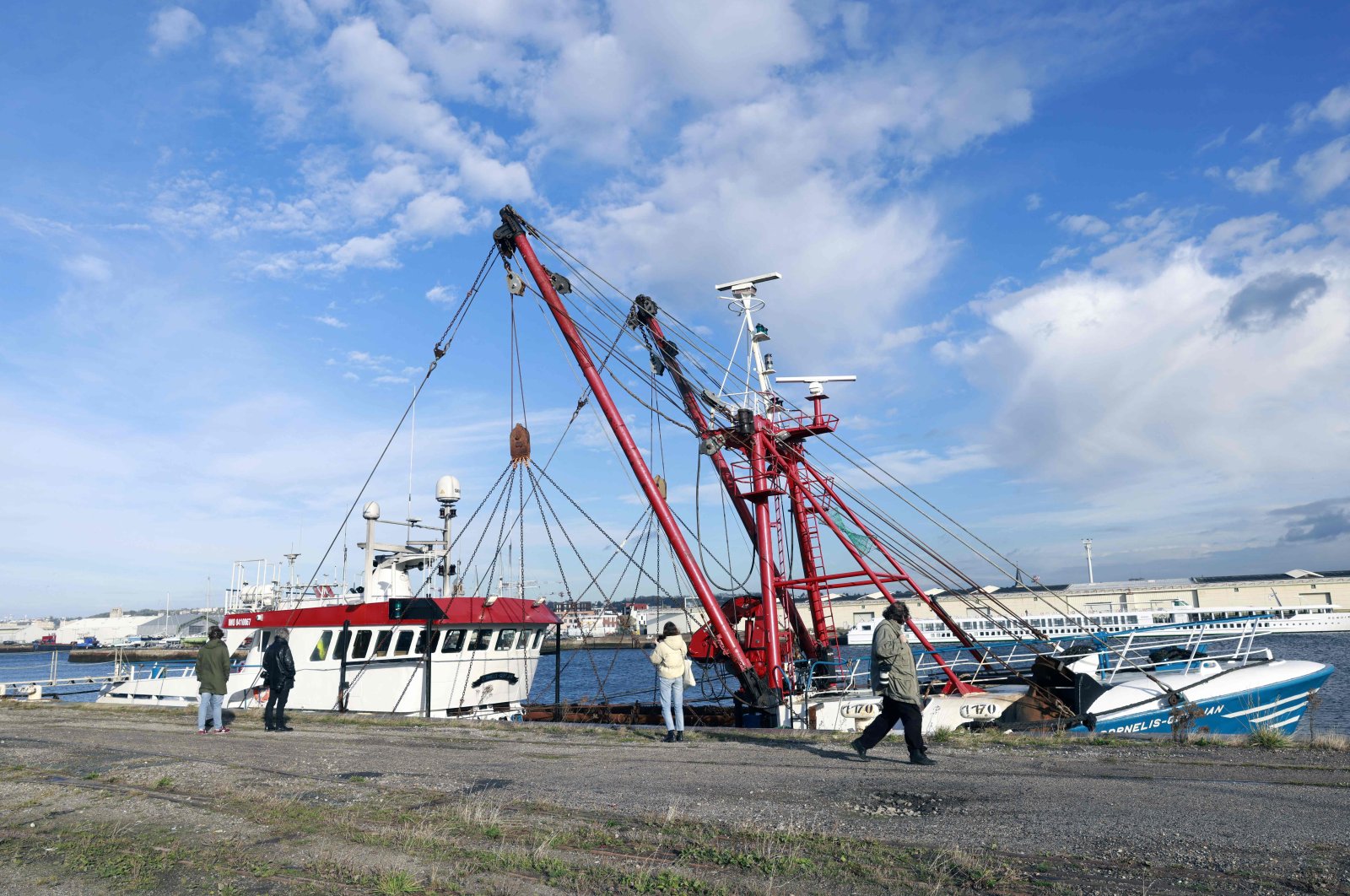 Bystanders walk past the fishing trawler Cornelis-Gert Jan, which has been detained by French authorities, in the harbor of Le Havre, northern France, Oct. 29, 2021. (AFP Photo)
by Agencies Oct 29, 2021 4:08 pm
RECOMMENDED

Britain’s environment minister pledged Friday to retaliate if France carries through on threats to block United Kingdom ships from French ports, warning that "two can play at that game’’ in the worsening dispute rooted in Britain’s departure from the European Union.

Britain summoned the French ambassador for a dressing-down after French authorities fined two British fishing vessels and kept one in port overnight Thursday. Since the U.K. left the economic orbit of the EU in January, relations between London and Paris have become increasingly frayed as the nations on either side of the English Channel sort out a post-Brexit path.

France has threatened to block British boats and tighten checks on U.K. vessels unless French vessels get more permits to fish in U.K. waters. France also suggested it might restrict energy supplies to the Channel Islands, which are British Crown dependencies that lie off the coast of France.

"We will see what they do,” Environment Secretary George Eustice told Sky News and added, "But if they do bring these into place, well, two can play at that game and we reserve the ability to respond in a proportionate way.”

The U.K. government said France's Ambassador Catherine Colonna would be summoned to the Foreign Office on Friday, in an official sign of displeasure.

"We regret the confrontational language that has been consistently used by the French government on this issue, which makes this situation no easier to resolve,” the British government said in a statement, as The Associated Press (AP) reported.

France vehemently protested the decision last month by the U.K. and the Channel Island of Jersey to refuse dozens of French fishing boats licenses to operate in their territorial waters. Dozens of other licenses were granted. France said the restrictions are contrary to the post-Brexit agreement that Britain signed when it left the EU.

Meanwhile, the EU's executive said U.K. authorities withdrew the impounded vessel's license to fish off France on March 1. But Macduff Shellfish, which operates the impounded scallop vessel Cornelis, hit back in a statement, saying it had access to French waters under the Brexit deal and that its activities were "entirely legal,'' and that it would defend itself against all claims. Its statement did not offer specifics on licenses.

"It appears our vessel has been caught up in the ongoing dispute between the U.K. and France on the implementation of the Brexit Fishing Agreement,'' the company statement said. "We are looking to the U.K. government to defend the rights of the U.K. fishing fleet and ensure that the fishing rights provided under the Brexit Fishing agreement are fully respected by the EU,'' it added.

British Prime Minister Boris Johnson will meet French President Emmanuel Macron this weekend amid the row over post-Brexit fishing rights. Johnson's spokesperson said the prime minister and Macron were expected to meet on the margins of the G-20 summit of the world's 20 biggest economies in Rome on Saturday and Sunday.

"He will discuss a range of issues," he added, according to Reuters. France remained a close and strong ally of Britain, he added. France did not immediately comment on his remarks.