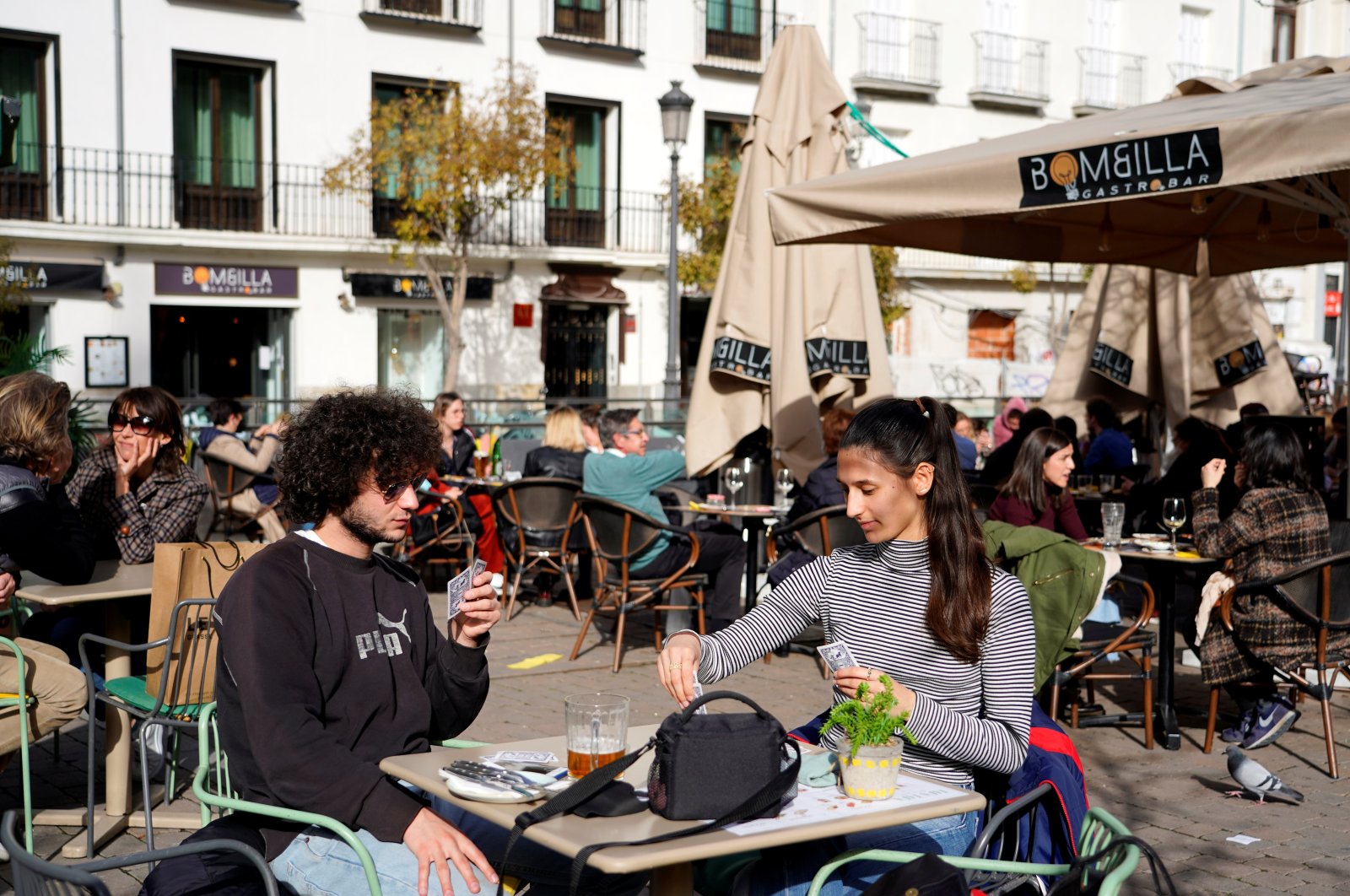 French visitors Theo Perucci and his sister Luna play cards while enjoying a meal on a terrace during their week on holiday as the coronavirus pandemic continues in Madrid, Spain, Feb. 5, 2021. (Reuters Photo)
by REUTERS Feb 08, 2021 2:38 pm
RECOMMENDED

French tourists weary of their strict national lockdown are flocking over the border to Madrid, where bars and restaurants are open and people can stay outdoors until 10 p.m., even as COVID-19 batters Europe in a virulent third wave.

Soudet arrived just before New Year's Eve to visit her boyfriend and taste the different vibe.

"It's all open. Even with a curfew, you can still do lots of things, so we make the most of it... I felt such relief when I sat at my first terrace."

Though it made mask-wearing mandatory and slashed occupancy of public spaces by half, Madrid's conservative regional government has set one of Spain's loosest curfews, defying national recommendations to shut hospitality venues and non-essential shops.

"Seeing the restaurants open was a little shock, because in Paris it's depressing... all the blinds are lowered," said Sorbonne student Adrien Durand, as he savored his first sit-down terrace meal. The city's counter-current policies stand out in Spain which, like France, is being pummelled by a third infection wave.

"Without tourism... we have no-one," said Lucio Burgos-Cespedes, who manages a restaurant on Madrid's Santa Ana Square. Headwaiter Edu Luna, who works at a tapas bar across the plaza, agreed, noting that the French now take six out of 10 tables. He was comfortable with the foreigners' patronage due to good workplace safety measures such as disinfection, mask-wearing and reduced occupancy. "I think it's great, business-wise. Without tourists, we don't eat."

French tourists overtook the British and Germans by the dozens of thousands in December, a report from Spain's National Statistics Institute (INE) said last week, representing one in four foreign visitors during the month. Of the roughly 650,000 tourists who visited Spain in December, more than 164,000 were French, entering chiefly by airplane, although some drove in.

"I've re-learned how to live, as though it were 2019," said 23-year-old law student Clementine Julien, who had not left France in a year and now sat contentedly at a Madrid terrace awaiting her drink. "I was tired of being able to do nothing," said 22-year-old Theo Perucci as he sipped a beer and played cards with his sister. "(We wanted) to do a trip and also live normally... so we came on a whim. Life here is good."

The influx of entertainment-seeking young tourists may, however, prove problematic. Police have broken up two parties hosted by French nationals which gathered dozens of mask-less revelers in rented apartments, despite the ban on households mingling indoors.

Police are investigating whether the fact both parties' promoters were French was a coincidence, prompting alarm in some media about a possible party tourism network run by French nationals.

Nevertheless, beyond its social life, Madrid appealed to business student Clemence Berna for its locals' rigor.

"I felt safe because... mask-wearing is much more respected here than in France or Britain," Berna said as she left a rooftop bar. "It had been almost a year, and I'll remember it for a long time: in the sun, on a terrace in Spain with a beer. I felt so much better."