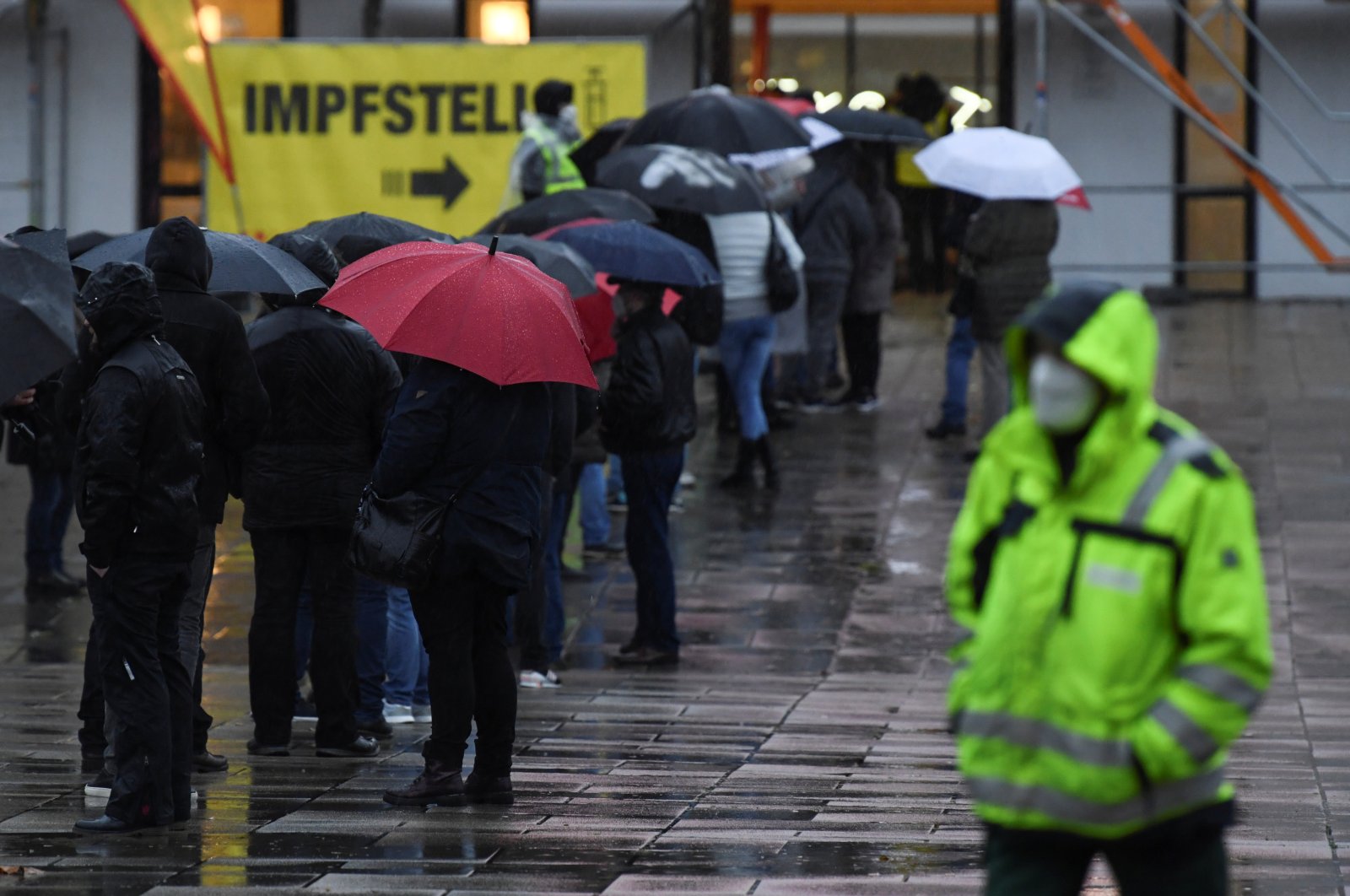 People hold umbrellas as they queue outside a vaccination center amid the COVID-19 pandemic during rainfall in the district of Marzahn-Hellersdorf, Berlin, Germany, Dec. 1, 2021. (Reuters Photo)
by Agencies Dec 01, 2021 10:53 am
RECOMMENDED

Four fully vaccinated people in southern Germany tested positive for the omicron COVID-19 variant as the country's next chancellor announced he would back a proposal to mandate inoculations for everybody next year, but that lawmakers should be free to vote according to their conscience on the issue.

Three of the infected people returned from a business trip to South Africa on Nov. 26 and Nov. 27 respectively, and the fourth person is a family member of one of the returnees, the public health office in the state of Baden-Wuerttemberg said on Tuesday.

"All four people are fully vaccinated. A mutation analysis carried out by the State Health Office has confirmed that all of them are infected with the new variant of concern," the office said in a statement, adding that all four were in quarantine. According to Reuters, they showed moderate symptoms.

Meanwhile, Olaf Scholz, whose center-left Social Democratic Party (SPD) narrowly won a national election in September, is expected to take office next week once his party and two others approve a deal to form the next government. The two-month transition, with outgoing Chancellor Angela Merkel as caretaker, has been blamed for Germany's slow response to the latest surge in COVID-19 cases in the country.

Speaking to public broadcaster ARD after a conference call between Merkel, himself and the governors of Germany's 16 states, Scholz insisted that "the leadership is there.”

During their call, national and state leaders discussed new measures to curb the outbreak including restrictions on shopping for unvaccinated people and limiting crowds at soccer matches, along with possible moves toward a vaccine mandate for all. These need to be approved at a further meeting Thursday.

"We will pave the way for a decision of conscience by members of the German Bundestag about a general vaccine mandate that will come into force next year, in February or early March, and which everybody can get ready for now," Scholz said.

"I will vote in favor of such a law," he added, according to The Associated Press (AP).

Many states have tightened rules of their own accord, but experts and politicians have called for more coordinated national action as infection rates hit new highs. Germany’s federal structure and the transition from Merkel’s national government to a new one under Scholz since the country's September election have slowed decision-making.

Proposals include contact restrictions for unvaccinated people in particular, requiring people to present proof of vaccination or recovery at nonessential shops, and restrictions on major events, he said.

A limited vaccine mandate for some facilities is already in the works, but German officials had hesitated to make it compulsory for everyone, fearing pushback from those opposed to the shot. Neighboring Austria has already decided to make vaccinations compulsory from February.

At least 68.5% of the population of 83 million is now fully vaccinated, but that’s below the 75% minimum threshold the government hoped for.

Seibert said that a new permanent expert group to advise officials on how to tackle the pandemic, whose creation Scholz announced last week, will be headed by Gen. Carsten Breuer, the military's head of domestic operations.

"It has taken a bit long, there has been back and forth and some conflict on the question of who should do what when, but as of today that seems solvable,” Markus Soeder, the governor of Bavaria, said after Tuesday’s videoconference. "Final decisions” need to be hammered out at the meeting of national and state leaders on Thursday, he said.

The governor of the worst-affected state of Saxony, Michael Kretschmer, said he expects an agreement then to play Bundesliga soccer matches without spectators. Soeder signaled there's still some disagreement on that, but said that "if Christmas markets are closed, it is not consistent to have full stadiums.” He said he would propose excluding spectators until at least the end of the year.

New infections have soared in recent weeks in the European Union’s most populous country – particularly in the east and south, with hospitals there already transferring intensive care patients to other parts of Germany. They have hit levels much higher than those the country saw earlier this year, though many more Germans are vaccinated now than they were then.

On Tuesday, the country’s seven-day infection rate dipped for the first time in over three weeks but, at 452.2 new cases per 100,000 residents, was only just short of Monday’s record of 452.4. The country’s disease control center, the Robert Koch Institute, said 45,753 cases were reported over the past 24 hours. Another 388 deaths were recorded, bringing Germany’s total so far to 101,344.

Earlier Tuesday, Germany's Federal Constitutional Court found that the most controversial measures contained in federal "emergency brake” legislation that was in place from April until the end of June were in line with the constitution. Those included a 10 p.m.-5 a.m. curfew and school closures in areas with high coronavirus infection rates.

That added to pressure for officials to act – as has the appearance in Germany and many other countries of the new omicron variant of the coronavirus.