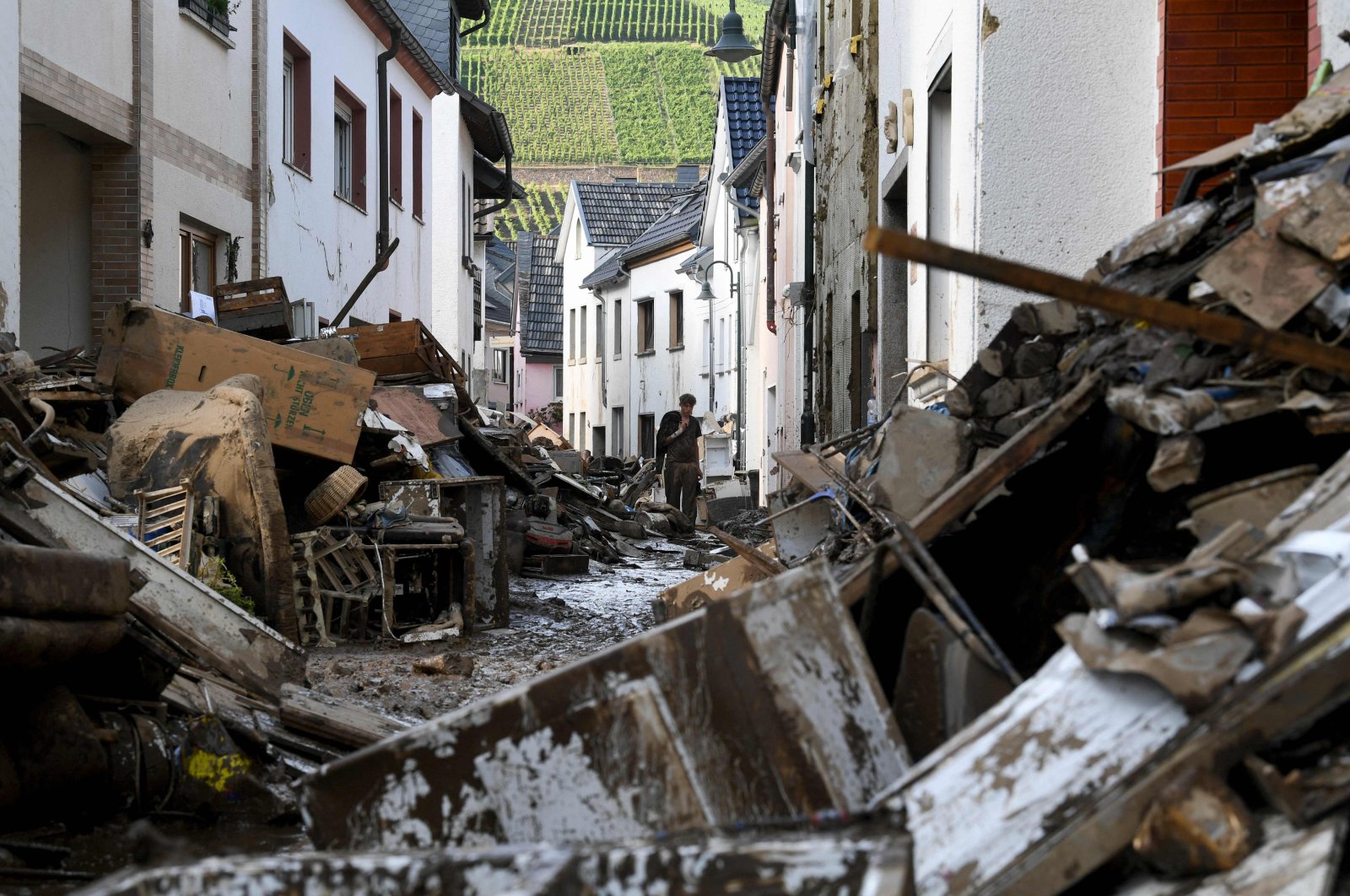 A resident walks in a muddy street full of debris and destroyed furniture after devastating floods in the city of Dernau, western Germany, on July 18, 2021. (AFP Photo)
by Agencies Jul 19, 2021 1:09 pm
RECOMMENDED

German authorities came under fire on Monday after reports revealed that they had been warned about the floods days before they hit the country’s western regions last week.

"There had been warnings for days, but people were not informed properly,” the daily said in an editorial, and argued that the political debate should now focus on the failure of politicians and governments instead of climate change.  Bild also slammed regional public broadcasters WDR and SWR for not interrupting their program schedules last week and for failing to inform people about what was about to happen until it was too late.

"Neither the state, nor WDR and SWR cared. They did not deliver although they are funded by high taxes for this,” the daily said, according to remarks carried by Anadolu Agency (AA).

German officials are defending the flooding measures in place that faced the raging torrents and caught many people by surprise, leaving over 190 people dead in Western Europe.

The German weather service DWD confirmed that meteorologists predicted extreme rain days before it hit these regions and had warned local authorities.

"Why did so many people die? Warnings were issued days in advance,” Marcus Beyer, a DWD forecaster also said on Twitter, adding that the scale of the incoming precipitation was well captured by the models, and the first preliminary warnings were issued three days ahead.

Efforts to find more victims and clean up the mess left behind by the floods across a swath of western Germany, eastern Belgium and the Netherlands continued on Monday as floodwaters receded.

So far, 117 people have been confirmed dead in the worst-affected German region, Rhineland-Palatinate; 46 in the neighboring state of North Rhine-Westphalia; and at least one in Bavaria, parts of which saw heavy rain and flooding over the weekend. At least 31 people died in Belgium.

The downpours that led to usually small rivers swelling at vast speed in the middle of last week had been forecast, but warnings of potentially catastrophic damage didn't appear to have found their way to many people on the ground – often in the middle of the night.

The head of Germany's civil protection agency said that the country's weather service had "forecast relatively well" and that the country was well-prepared for flooding on its major rivers. But, Armin Schuster told ZDF television late Sunday, "half an hour before, it is often not possible to say what place will be hit with what quantity” of water. According to The Associated Press (AP), he said that 150 warning notices had been sent out via apps and media. Schuster said he couldn't yet say where sirens sounded and where they didn't – "we will have to investigate that.”

Officials in Germany's Rhineland-Palatinate state said they were well-prepared for flooding and municipalities had been alerted and acted. But the state's interior minister, Roger Lewentz, said after visiting the hard-hit village of Schuld with Chancellor Angela Merkel on Sunday that "we of course had the problem that the technical infrastructure – electricity and so on – was destroyed in one go.”

Local authorities "tried very quickly to react," he said. "But this was an explosion of the water in moments... You can have the very best preparations and warning situations (but) if warning equipment is destroyed and carried away with buildings, then that is a very difficult situation.”

Cellphone networks also were knocked out by the flooding. There were already broader questions about Germany's emergency warning system after a nationwide test last September, the first in 30 years, largely failed. Sirens didn't sound in many places, or had been removed after the end of the Cold War, and push alerts from the national warning app arrived late or not all.

Schuster, the head of the civil protection agency, noted that a program to reform civil protection was launched earlier this year, including a drive to encourage local authorities to install more sirens. Germany doesn't have a text messaging system for disaster warnings, but Schuster told Deutschlandfunk radio it is exploring the possibility.

As local communities contemplate the huge task of rebuilding smashed homes and infrastructure such as the water system, Chancellor Angela Merkel's Cabinet is set to draw up a package of immediate and medium-term financial aid on Wednesday. Asked on Sunday whether there should be obligatory insurance for people living in high-risk areas, Merkel sounded skeptical, arguing that it could "overload the economic capacity” of companies and individuals. Rhineland-Palatinate's governor, Malu Dreyer, favors the idea.