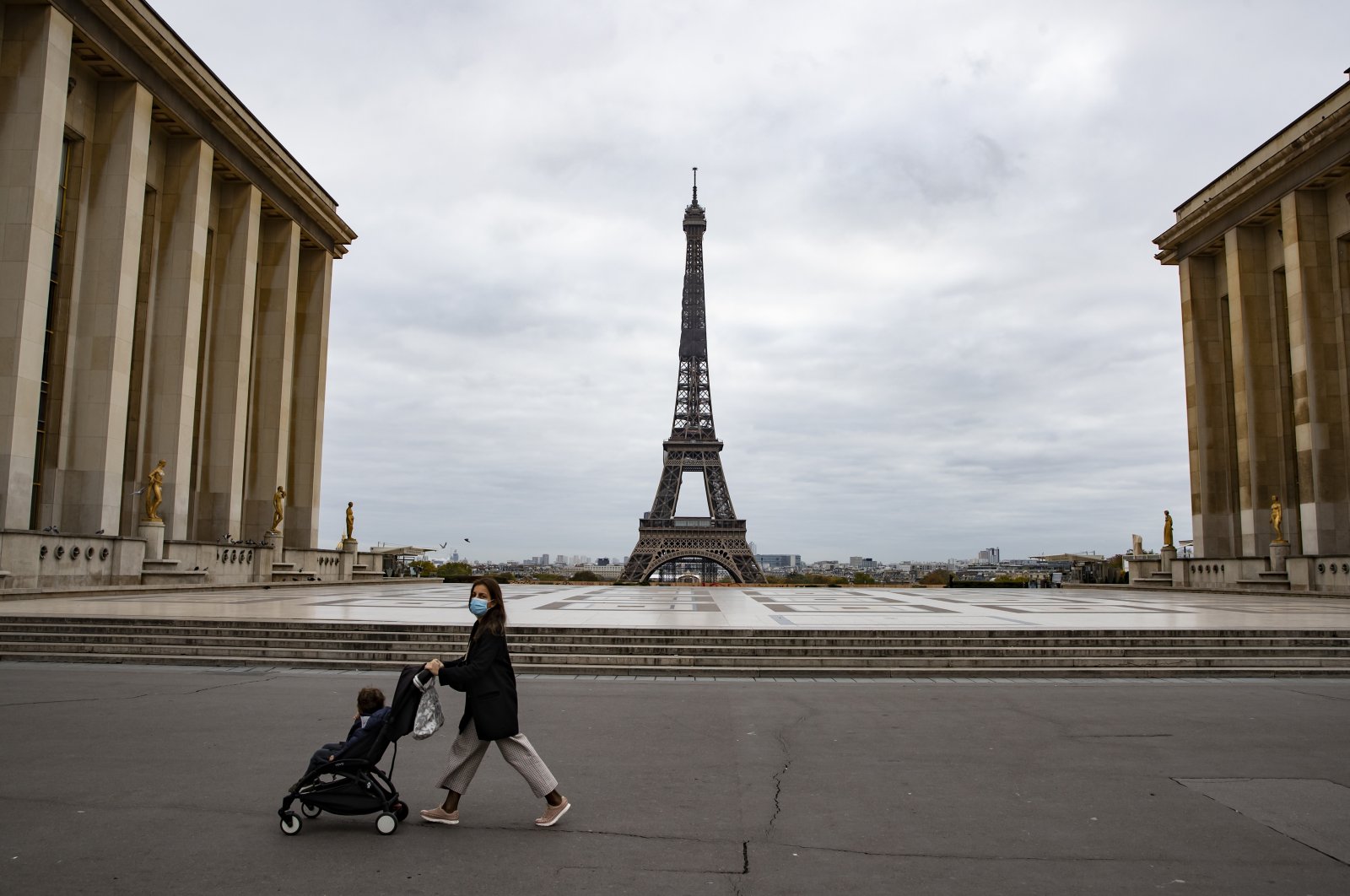 A woman pushes a stroller across a deserted Trocadero Square near the Eiffel Tower on the first morning of the second national lockdown, Paris, Oct. 30, 2020. (EPA Photo)
by DAILY SABAH WITH AGENCIES
Nov 02, 2020 10:58 am

The coronavirus crisis has deepened all around the world as a further tightening of coronavirus restrictions has triggered anger and frustration in Europe. Over 7 million confirmed COVID-19 cases and over 250,000 virus-related deaths have been reported across the continent since the start of the pandemic. In recent days, European nations from Britain to Italy have reinstituted restrictions ranging from reduced business hours and curfews to partial or near-total lockdowns to control the surge of infections sweeping the continent. The conflict between reining in personal desires for the greater public good or giving in to individual pleasure is at the heart of Europe's renewed struggle against the virus.

To curb the spike in Germany, Chancellor Angela Merkel has ordered a round of shutdowns from Monday until the end of the month. Public life in Germany has been brought to a near-standstill as part of a four-week shutdown in Europe's largest economy in a bid to stem a surge in coronavirus infections. Restaurants and bars will be shuttered along with cinemas, theaters, museums and other cultural and recreational facilities. For the next four weeks initially, domestic tourism has essentially been banned in Germany. Across most of the country's 16 states, outdoor gatherings are limited to members of no more than two households, with a maximum of 10 people. In some regions, this also applies to gatherings in the home.

England prepared for fresh stay-at-home orders, following in the steps of Austria, France and Ireland, with many expressing anxiety about the economic cost of the four-week shutdown due to take effect from Thursday. Tighter lockdown rules were also set to kick in Monday for Belgium, which has the most COVID-19 cases per capita in the world. Portugal, too, has ordered a partial lockdown starting Wednesday. And in France, Prime Minister Jean Castex said supermarkets would be barred from selling nonessential items from Tuesday to protect small shopkeepers who have been forced to close.

Spain has already imposed a nighttime curfew and almost all of its regions have implemented regional border closures to prevent long-distance travel. The weekend before the curfew took effect, police in Madrid also busted over 300 parties that violated a prohibition on get-togethers of more than six people. Even with the curfew in place, police broke up over 100 such gatherings in apartments on Friday night alone. Madrid officials say 30% of the country's new confirmed infections are in people ages 15-29 and that 80% of all known infections happen in groups of family members or friends. Madrid’s regional vice president, Ignacio Aguado, pleaded with young people to consider the consequences of their good times.

The virus has infected more than 46 million people worldwide, with over 1.2 million deaths. The U.S. is the worst-affected country in the world with 9.2 million infections and more than 230,000 deaths and the pandemic has been front and center during the bitter election campaign. With cases surging again, experts have warned of more devastation. Top government scientist Anthony Fauci told the Washington Post in an interview that the U.S. is "in for a whole lot of hurt."

The threat of the virus was illustrated further Sunday when the head of the World Health Organization (WHO) announced that he was self-quarantining after someone he had been in contact with tested positive. "I am well and without symptoms but will self-quarantine over the coming days, in line with @WHO protocols, and work from home," Tedros Adhanom Ghebreyesus said in a tweet, stressing the importance of complying with coronavirus guidance.

But the ongoing tightening of virus rules and restrictions has sparked anger in people weary of confinement and the painful economic costs. That frustration has led to protests in many parts of the world, especially Europe, with some leading to violent skirmishes with police.

Protesters in several Spanish cities clashed with security forces for a second night Saturday, police said, with vandalism and looting breaking out in some parts. There has already been violence in several Italian cities, as well as the Czech capital Prague recently.

The unrest over virus restrictions has not been limited to Europe. Riots took place in several Argentinian jails on Saturday, as prisoners demanded the resumption of visits during the pandemic.