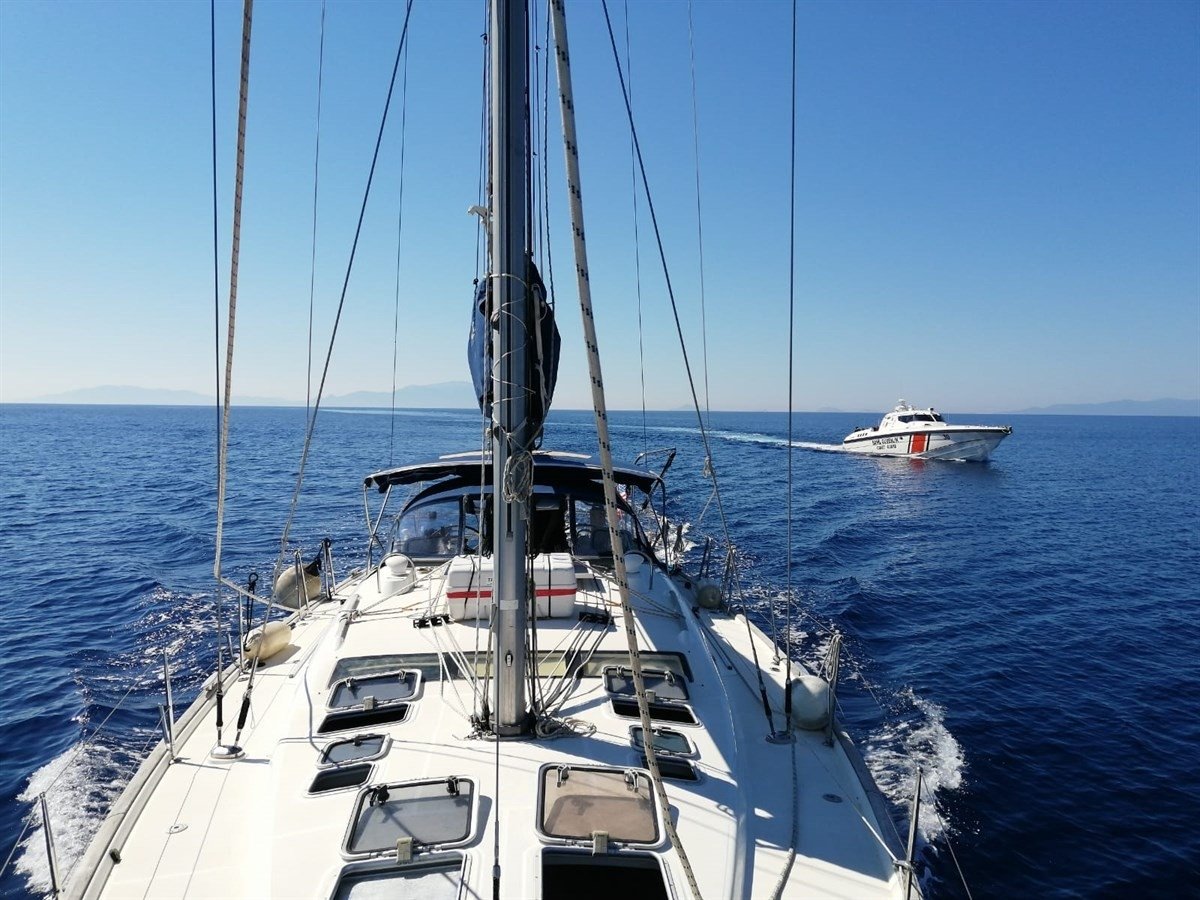 A group of irregular migrants was stopped by the Turkish coast guard off the coast of western Izmir province's Dikili district, Turkey, June 22, 2021. (IHA Photo)
by Daily Sabah with AFP Jul 13, 2021 9:05 am

As the Greek government continues denying pushbacks and violent acts committed against migrants and asylum seekers, testimonies point to the contrary

The Greek coast guard is once again accused of pushing back irregular migrants in the Aegean as criticism over Athens’ illegal activities and treatment grow.

Tchinda, a migrant who declined to give his last name and was trying to reach the island of Kos, was halted by Greek vessels together with 30 other migrants sailing in the boat.

"First a navy ship blocked our way, then it was joined by two smaller Zodiac-type boats," the 39-year-old from Cameroon told Agence France-Presse (AFP).

"The coast guards were armed and shouted at us to go home," he said in a series of phone interviews conducted between July 1 and 8.

A cellphone video shared by the Cameroonian with AFP shows a packed dinghy immobilized by a Greek coast guard patrol boat, with four crew members monitoring the migrants.

A second patrol boat and a third vessel can be seen in the distance.

"Stay down and stay calm, for your safety," a Greek coast guard, in a mask and gloves, says, holding a long pole.

Next to him, a female coast guard fingers a machine gun.

But the migrants, most of them men wearing life jackets, are agitated.

"I am tired," one man shouts back. "Pushback," says another.

Tchinda said he believed the guards "did not dare" to act violently toward the migrants because they saw them filming.

But, he said, they made waves to push the dinghy back toward Turkish waters.

"Luckily no one fell into the water but it could have been very dangerous," the Cameroonian added.

The Turkish coast guard confirmed in a June 11 written statement that it had picked up a boat the previous day shortly before 1:00 p.m. local time.

Details on the number of migrants on board, its location and the time chimed with those described by Tchinda.

The incident comes amid a series of media and nongovernmental organization (NGO) reports in recent months on the forced return of migrants from Greek territory or in Greece's waters to Turkey.

'They were never here'

"Asylum-seekers risk being returned to Turkey immediately after their arrest by the police, who hide them for a few hours and pretend that they were never on the island," Dimitras told AFP.

Greece has toughened its migration policy since conservative Prime Minister Kyriakos Mitsotakis came to power in 2019.

Border patrols have increased, asylum processes have sped up – which critics say puts applicants at a disadvantage – and benefits have been slashed, even for refugees who are granted asylum.

Asked about the issue earlier this month, Mitsotakis told Kathimerini daily: "I reject the concept of pushbacks ... this word does not exist in my vocabulary."

"But when we see a boat coming ... we will do everything in our power so that this boat returns to where it set off from," he added.

"This is what we do, with full respect to human life."

"The Greek coast guard is not a reception service for refugees and migrants. They are there to guard our borders," Mitsotakis said.