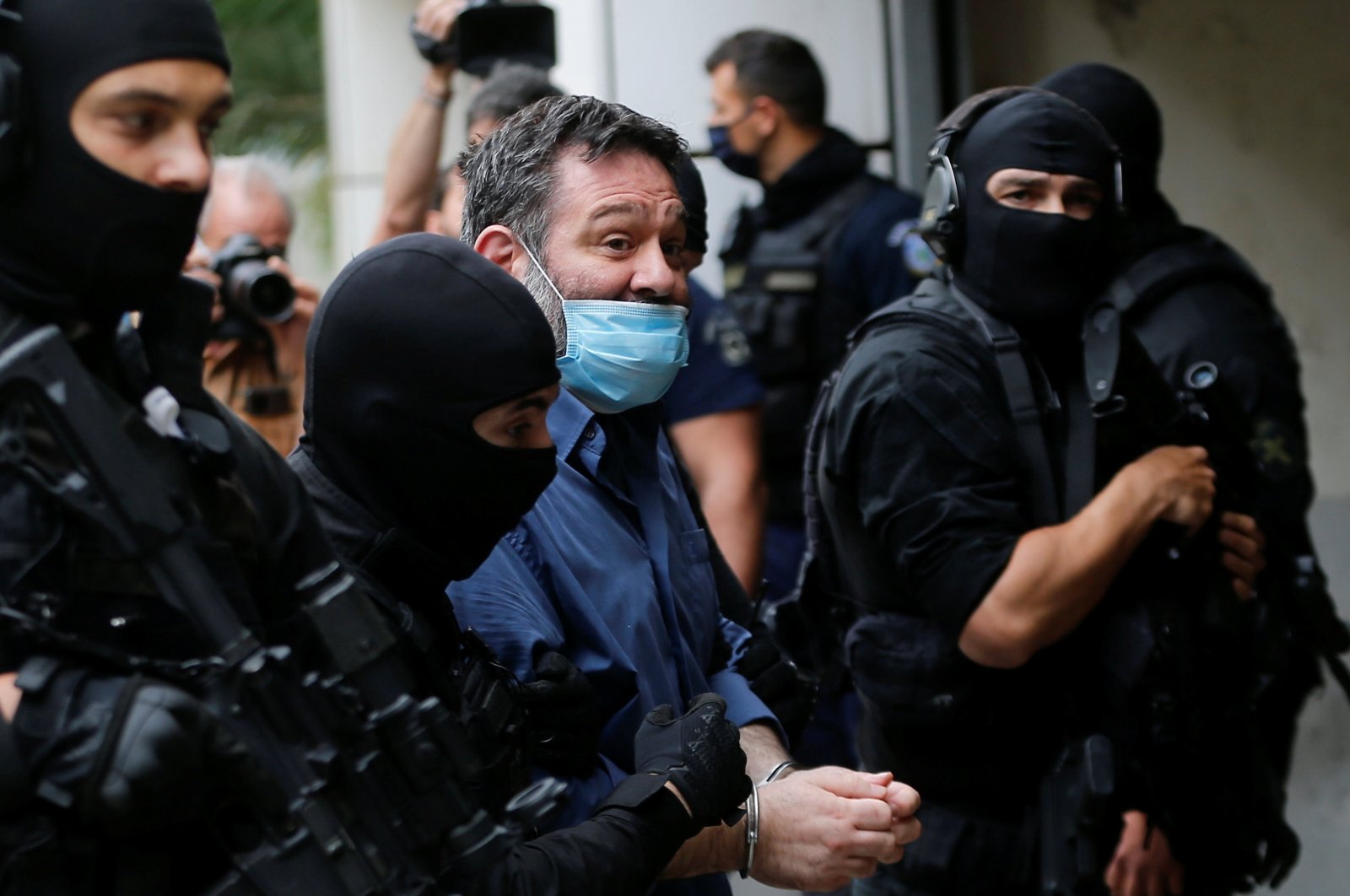 Ioannis Lagos (C), a Greek member of the European Parliament and former member of the far-right Golden Dawn party, is escorted by anti-terrorism police officers to the prosecutor's office in Athens, Greece, May 15, 2021. (REUTERS)
by French Press Agency - AFP
May 15, 2021 5:09 pm

Ioannis Lagos, a Greek member of the European Parliament and convicted neo-Nazi, arrived in Athens on Saturday, following his extradition from Belgium.

He had been arrested in Brussels to serve a 13-year jail term in Greece.

Handcuffed, he was taken from the airport directly to the prosecutor's office, where he declared, "Orthodoxy and country are worth all sacrifices."

Lagos, who was detained last month shortly after the European Parliament stripped him of his immunity, had been held in a prison in the Belgian capital for almost two weeks.

Initially, the MEP had refused his extradition but he later dropped his opposition to being sent home to face jail.

He was elected to the European Parliament in 2019. He entered as a member of the far-right Golden Dawn group but later rebadged as an independent.

In October, along with other leaders and members of Golden Dawn, he was convicted in Greece on several charges including running a criminal organization.

But the court ruling could not be enforced while Lagos continued to enjoy an MEP's immunity from prosecution and to reside in Brussels, the seat of the European Parliament.

The marathon trial of the Golden Dawn top brass, including founder and long-term leader Nikos Michaloliakos, was seen as one of the most important in Greece's modern political history.

In total, more than 50 defendants were convicted of crimes ranging from running a criminal organization, murder and assault, to illegal weapons possession.

The jail terms capped a stunning downfall for a party that was the country's third most popular in 2015.

The crackdown was sparked by the murder of a 34-year-old anti-fascist rapper, Pavlos Fyssas, stabbed to death in front of a cafe in a western Athens suburb in September 2013.

Lagos was Golden Dawn's local district commander in the broader Piraeus area where Fyssas was murdered.

"Nothing would have been done without approval from Lagos, there is no chance," the victim's mother Magda had told the court during the trial.

Based on records of phone conversations between Golden Dawn members the night Fyssas was murdered, prosecutors had also argued the attack was carried out with the knowledge of senior party cadres.

They said it was part of a broader pattern of violence organized by the party against migrants and political opponents.

Other crimes committed in the area overseen by Lagos included assaults on Egyptian fishermen and communist unionists in 2012 and 2013 respectively.

Michaloliakos and the majority of those found guilty are already behind bars, but Golden Dawn deputy leader Christos Pappas is currently on the run.

Greek media have reported that Pappas could be hiding under the guise of a monk somewhere in the Balkans.

Tapping into anti-austerity and anti-migrant anger during Greece's decadelong debt crisis, Golden Dawn won 18 seats in parliament in 2012, with its lawmakers repeatedly shocking the chamber with provocative and aggressive behavior.

Its influence grew in 2015 but began to ebb as the group's criminal activities began coming to light in trial testimony.

The party failed to win a single seat in the last parliamentary election in 2019.