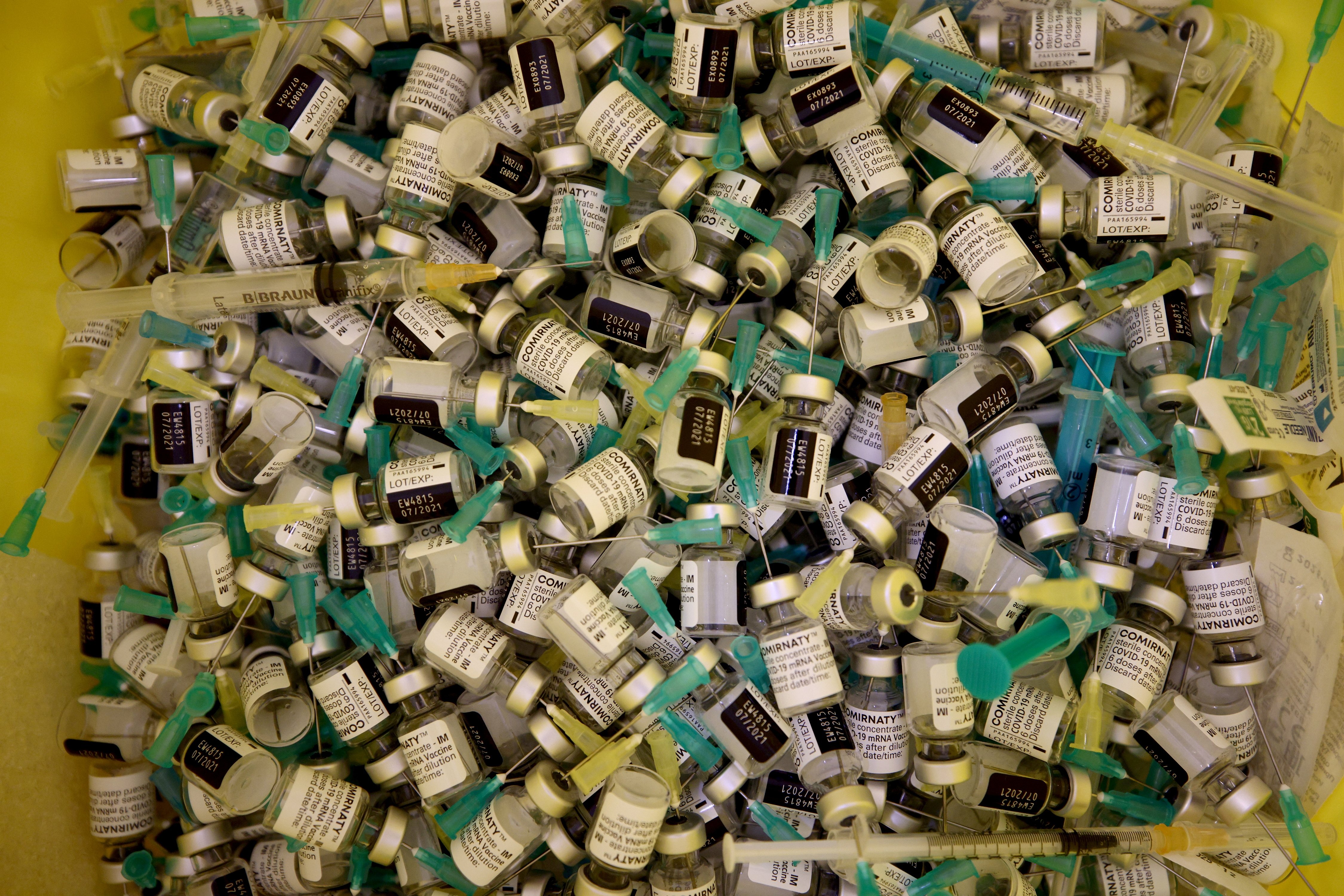 Just over four and a half months after the West's first COVID-19 vaccine dose was given to 90-year-old Margaret Keenan in Britain on Dec. 8, 2020, a remarkable milestone has been achieved – nearly 1 billion jabs, both first and second shots – have been administered globally, according to Agence France-Presse's (AFP) database.

The unprecedented inoculation drive is seen as the world's ticket out of coronavirus lockdowns, despite concerns about rare side effects, worries over supply and a glaring inequality between rich and poor.

With new coronavirus variants sparking a worrying fresh spike of cases and uncertainty over the vaccines' effectiveness against them, the planet is now racing to inoculate as many people as possible before being overwhelmed by yet another wave of a pandemic that has already killed 3 million people.

"A year ago I felt myself a young man, now I am an old man," said Laszlo Cservak, a 75-year-old Hungarian, after his first jab near the River Danube.

"I horribly miss not going to the pool or gym, and traveling, so I came here to get liberated and my old life back," added Cservak, reflecting the COVID-19 restrictions weariness felt by billions worldwide.

In the darkest days of the pandemic, the idea of rapidly creating, manufacturing and authorizing even one effective vaccine against the disease looked far off.

But the world's scientists, aided by billions in public funding, worked around the clock to develop several viable vaccines – the first ones using cutting-edge messenger RNA technology that hacks into human cells and effectively turns them into vaccine-making factories.

"We did it in 10 months. This is a huge scientific success."

With clinical trials showing efficacy of up to 95%, attention turned to the logistical nightmare of producing, storing, delivering and administering the vaccine – in theory to everyone on Earth who wanted it.

The rollout was sluggish in many countries but some deployed creative logistical solutions, turning cathedrals, iconic sports stadiums and theme parks into emergency vaccination centers.

World leaders from U.S. President Joe Biden, Britain's Queen Elizabeth and Pope Francis rolled up their sleeves to take the shot – although not always in front of the cameras – in a bid to counter public skepticism.

Biden told the world "there's nothing to worry about" as he received his shot live on TV.

The few countries that rolled out a vaccine quickly have seen cases and deaths fall, with a return to something of a normal life.

In Israel, where more than half of the population is fully vaccinated, cases dropped to around 13 per 100,000 people compared to around 650 in January. Deaths fell by a factor of 10.

British pubs have reopened their beer gardens, Israel dropped mask-wearing outdoors and theme parks and theaters have restarted in the United States.

"To get a piece of that magic is just, it's indescribable. It's just so wonderful to be back."

But it has been far from plain sailing. The scramble for vaccines has seen ugly political spats, with China and Russia accused of "vaccine diplomacy" by offering their domestic jabs to strategic allies.

Britain and the European Union became embroiled in an unseemly post-Brexit row over access to vaccines and the bloc came under fire for a shambolic start to the vaccine rollout.

"Getting these vaccines into the arms of billions of people is now the most pressing challenge for the international community. This is, in a manner of speaking, the 'new arms race,'" according to The Soufan Center, a research body.

And with World Health Organization officials stressing that "no one is safe until everyone is safe," there has been outrage over the COVID-19 vaccine inequity between the rich world and poorer countries – a "shocking and expanding disparity," according to WHO chief Tedros Adhanom Ghebreyesus.

Around half of the doses administered so far have been in high-income countries accounting for 16% of the population. The 29 lowest-income nations have received 0.1%, according to an AFP count.

Recently, very rare but occasionally fatal side effects including blood clots have hit the headlines, afflicting particularly the vaccine produced by AstraZeneca.

Despite authorities stressing the benefits far outweigh the risks, the negative press threatens to weigh on vaccine take-up, with a flood of misinformation on social media fuelling the anti-vax drive.

Some have resorted to bribing the reluctant: California-based firm Bolthouse Farms gave workers $500 to get the jab. One Beijing district handed out boxes of eggs and free trips to popular tourist attractions as an incentive.

What does the future hold? Already stirring controversy are "vaccine passports," likely to be required in some form for international travel and entrance to public events, despite the WHO saying it "strongly discourages" their implementation and campaigners crying foul over data protection.

Vaccine tourism is also a growing trend: countries like Greece and Iceland are banking on a surge from already-vaccinated holidaymakers while Serbia has welcomed thousands of "vaccine tourists" as domestic take-up stalls.

Politicians, and the scientists they are working with, stress that vaccination – combined with lockdowns and social distancing – is the only way out of the crisis.

But poor countries face many years before their populations are inoculated and Pfizer CEO Albert Bourla has already warned a third shot may be required, even possibly an annual jab, as scientists are not certain yet how long COVID-19 vaccinations provide immunization.