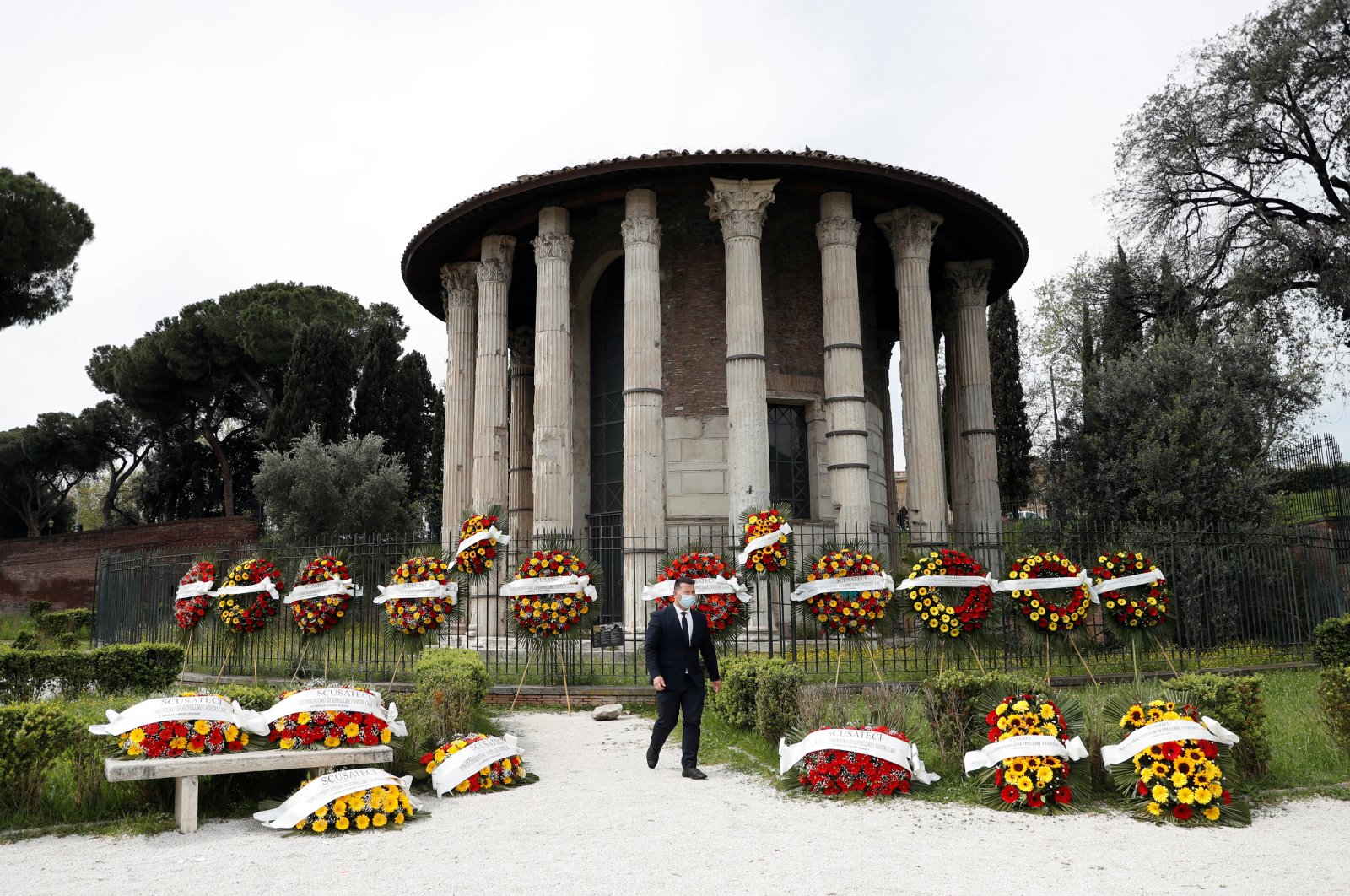 A man walks past funeral wreaths with the words "Sorry, but they don't allow us to bury your loved ones" written across them laid out by funeral workers in Rome, Italy, April 16, 2021. (Reuters Photo)
by Reuters Apr 16, 2021 5:29 pm
RECOMMENDED

As a new wave of COVID-19 cases hit Rome, the surge in the number of deaths has meant the overwhelming of funeral services. Thus, undertakers took to the streets on Friday, to protest the massive backlog of coffins continuing to buildup at Rome's cemeteries, some waiting for months, as they blamed city authorities for such a failure of services.

Funeral directors said more than 2,000 bodies were being stored at Rome's sole crematorium, which can handle around 50 cremations a day, while mortuary rooms at other cemeteries were packed, awaiting burial or interment. Some bodies have been in storage since the start of the year, they said.

"Every few days we are told the cemeteries are blocked and they haven't got any more room to take in the dead," said Giovanni Caciolli, head of Italy's federation of funeral workers.

In a statement earlier this week, the city council company that handles burials and cremations, AMA, acknowledged that it was facing an unprecedented situation and was working to create 60,000 new burial plots for the city.

"AMA is doing its utmost to deal with a steadily increasing number of deaths," it said.

Italy has reported 116,000 coronavirus-related deaths so far. The majority have been in northern Italy, but in recent months the virus has claimed a growing number of victims in central and southern Italy.

Funeral directors say hearses face lengthy queues at city cemeteries as they await workers to log and store the coffins.

A video obtained by Reuters showed large refrigerated containers parked outside the Prima Porta cemetery. Workers said the containers were being used to hold coffins.

Protesters on Friday laid funeral wreaths in front of the Temple of Hercules, close to Rome city hall.

"Sorry, they don't allow us to bury your loved ones," funeral homes wrote on the wreaths.

Earlier this week a local man plastered huge posters across the city apologizing to his mother, who died in early March but whose body is still stuck in storage. "I am sorry mum that I've not been able to have you buried yet," the posters say.

Opposition politicians say the crisis could have been averted if the city had heeded warnings in 2017 that it needed to modernize and develop the crematorium.