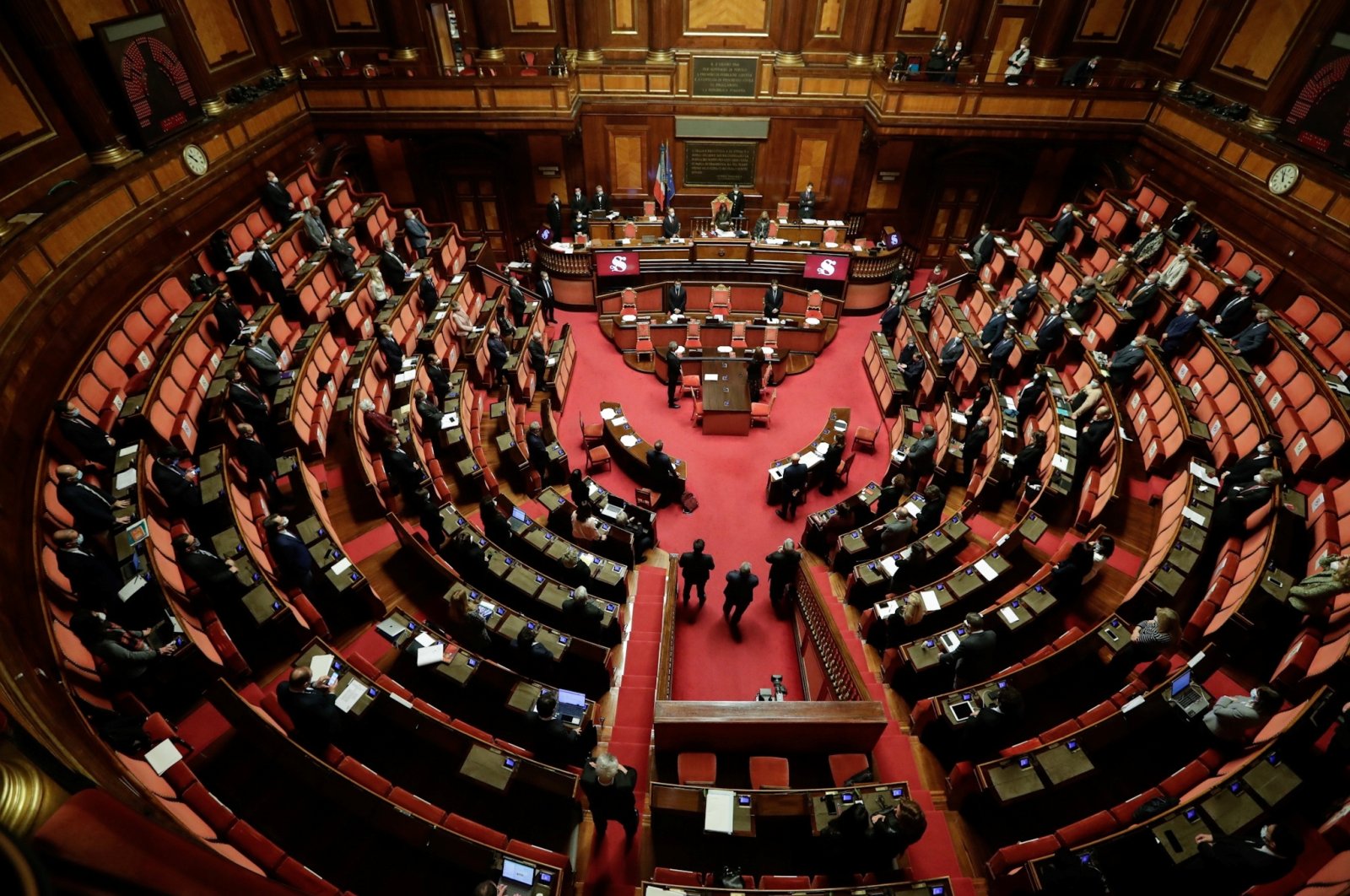 Lawmakers at the Senate observe a moment of silence during Italian Foreign Minister Luigi di Maio's address on the killing of the Italian ambassador to the Democratic Republic of Congo Luca Attanasio and his bodyguard, in Rome, Italy, Feb. 24, 2021. (Reuters Photo)
by ASSOCIATED PRESS Feb 24, 2021 3:32 pm
RECOMMENDED

Italy on Wednesday pressed the United Nations for answers about the attack on a U.N. food aid convoy in Congo that left a young ambassador and his paramilitary police bodyguard dead.

Foreign Minister Luigi Di Maio told lawmakers in Rome that Italy has asked both the U.N. and the U.N. World Food Program (WFP) to open an investigation into the security arrangements for the convoy, which was attacked two days earlier.

The minister said Italy also will spare no effort to determine the truth behind the killing of Ambassador Luca Attanasio and Carabiniere paramilitary officer Vittorio Iacovacci. A WFP Congolese driver, Moustapha Milambo, was also killed in the attack.

"We have formally asked the WFP and the U.N. to open an inquest that clarifies what happened, the motivations for the security arrangements employed and who was responsible for these decisions," Di Maio said.

The trip was undertaken at the U.N.’s invitation, according to Di Maio. The two Italians had "entrusted themselves to the protocol of the United Nations," which flew them on a U.N. plane from Kinshasha to Goma, 2,500 kilometers (1,500 miles) away, Di Maio said.

The Italian embassy in Kinshasha, Di Maio noted, has two armored vehicles at the ambassador's disposal for moving around the city and the country. But for Monday's mission, to visit a WFP school food project in Rutshuri in eastern Congo, Attanasio was traveling in U.N. vehicles. Only hours earlier, Di Maio, flanked by Premier Mario Draghi, met the arrival of the bodies of the two Italians at a Rome military airport.

Autopsies are scheduled for Wednesday and a state funeral for both men was set for Thursday in Rome.

A special team of Carabinieri investigators, dispatched by Rome prosecutors, arrived Tuesday in Congo on what Di Maio said would likely be multiple missions to determine what happened. Attanasio, 43, who leaves a widow involved in volunteer projects in Congo and three young children, "was in love with his profession, with Africa and his family,'' Di Maio said. He noted that the Carabiniere was nearing the end of his security detail in Congo and was soon due back in Rome.

WFP, which won the Nobel Peace Prize last year for its efforts to feed refugees and other malnourished people worldwide, is headquartered in Rome.

"For this reason, I immediately asked WFP in Rome and the United Nations, involving directing the Secretary General (Antonio) Guterres, to supply a detailed report on the attack on the convoy,'' Di Maio said.

WFP has said the road had been previously cleared for travel without security escorts. U.N. security officials based in Congo usually determine road safety. On Tuesday, U.N. spokesperson Stephane Dujarric said in New York that the U.N. had launched an internal review concerning the "security around the incident.” Di Maio said the attackers numbered six, had light arms and apparently spread obstacles on the road and fired shots in the air to stop the convoy.

"The noise of the shooting alerted soldiers of the Congolese Armed Forces and the rangers of Virunga park, less than a kilometer (half-mile) away, headed to the place of the incident." Di Maio quoted the local governor as saying that to force the victims to go into the bush, they killed the WFP driver.

When the ranger patrol arrived, Di Maio said, citing the Congolese interior minister’s account, the attackers "fired upon the Carabiniere, killing him, and at the ambassador, gravely wounding him."

Attanasio died of his wounds shortly afterward. Italy will reinforce its commitments to aid Africa, Di Maio said, calling that the "best way to honor the memory" of the two slain Italians.

"A policy that puts Africa at the center of Italian diplomatic, European and international attention, this is the commitment Luca believed in and in which we believe in,'' the foreign minister said.