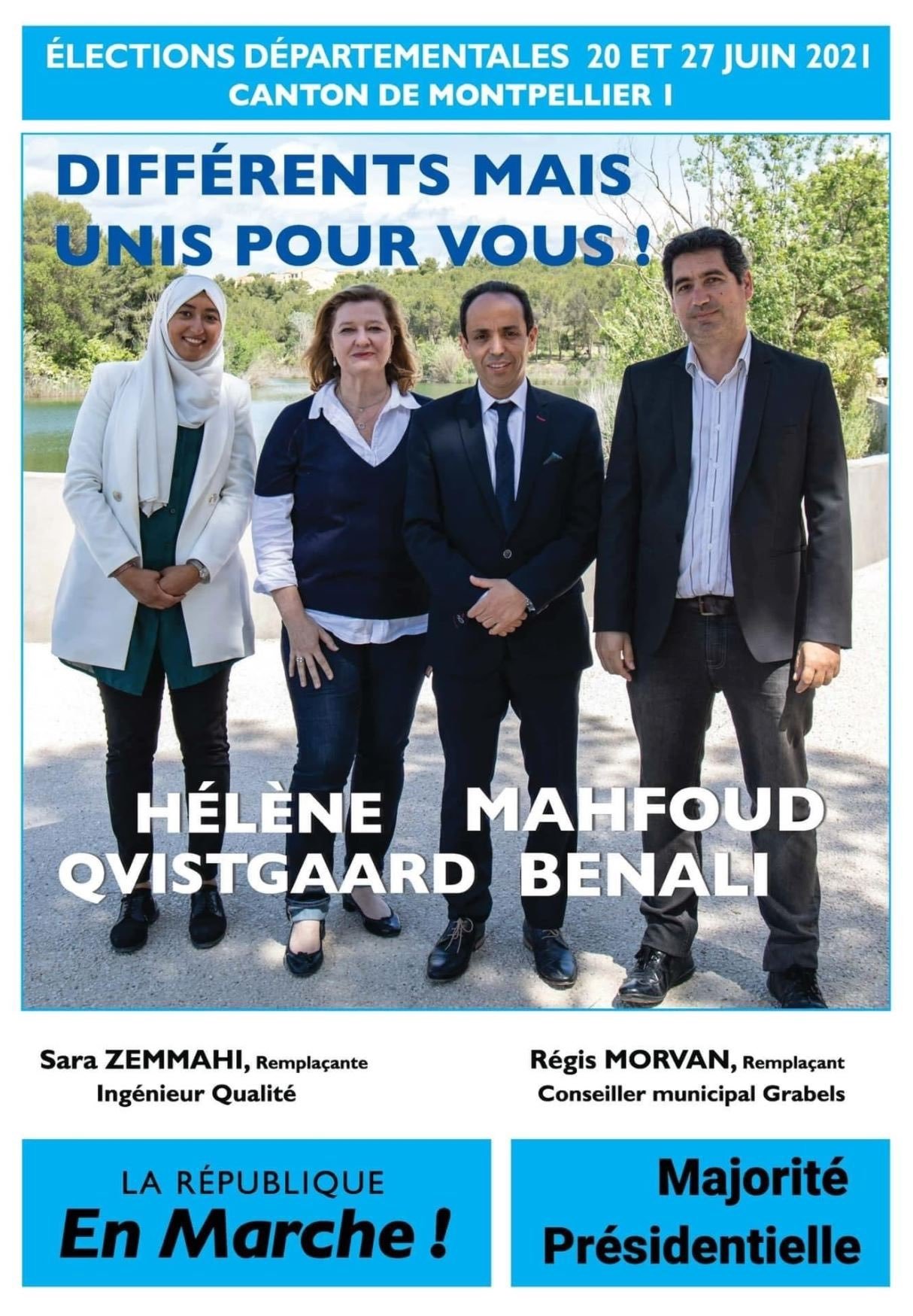 Sara Zemmahi (L) wearing a headscarf on a local election poster that reads "Different But United For You.”
by ASSOCIATED PRESS May 12, 2021 7:56 pm
RECOMMENDED

"I’m frankly pained by the decision,” Mahfoud Benali, the lead candidate on the list for a district in the southern city of Montpellier, said Wednesday of the move by Macron's party to refuse support for Sara Zemmahi, a quality engineer, from his list.

Zemmahi is shown in a campaign poster with a white headscarf before the June elections. She was on a work trip and not immediately available to comment, Benali said on a TV talk show on Channel 8.

While France bans Muslim headscarves in classrooms, they aren't forbidden in the public space or on campaign posters.

However, Stanislas Guerini, head of Macron’s LREM party, told radio station RTL Tuesday that, nevertheless, the party wouldn't back Zemmahi, one of four people in the poster.

"We consider that ostentatious religious signs don’t have their place on posters, whatever the religion,” Guerini said.

The poster for the June 20 and 27 local elections shows two men and two female candidates, including Zemmahi, under the sign "Different But United For You.” On the bottom, it notes the candidates stand for the "presidential majority.”

The decision, which drew criticism from some members of Macron’s own party, underscored the divisiveness of France’s long-standing debate on headscarves, and secularism, and how it may play out in politics before next year’s presidential vote. Macron is expected to try to renew his mandate, and, if so, could find himself in a repeat of the 2017 race, facing off against far-right leader Marine Le Pen.

It was a tweet of the poster by the No. 2 official in Le Pen’s National Rally party, Jordan Bardella, that brought the issue into the public eye, along with his remark: "That’s the fight against separatism,” a reference to Macron’s priority effort to rid France of so-called "political Islam and extremists."

In a later tweet, Bardella said the Muslim headscarf is "contrary to all our values” and his National Rally party "will forbid it in public.” He was clearly making a reference to an eventual victory of Le Pen in next year’s presidential race.