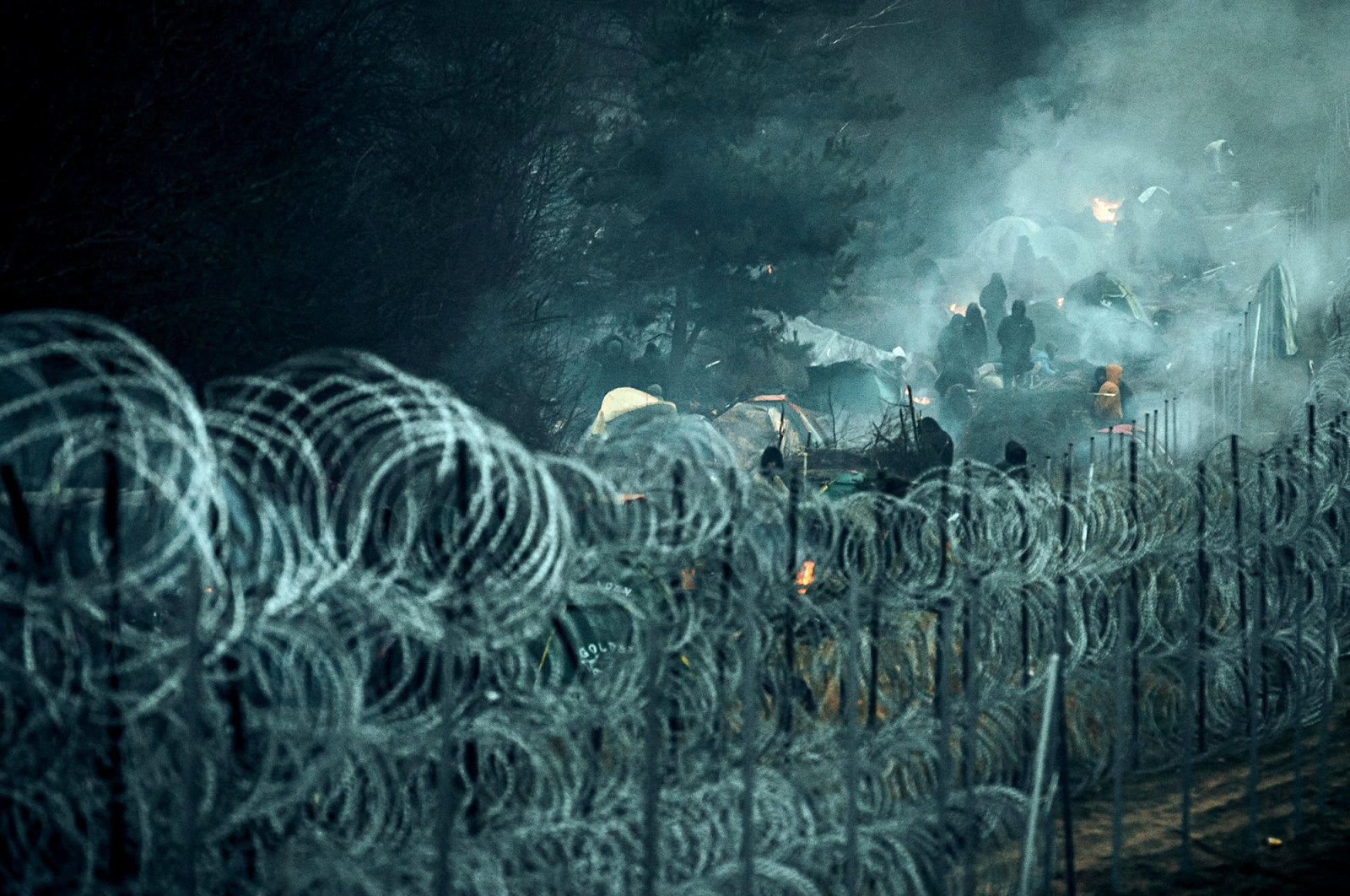 Migrants are seen on the Belarus side of the border with Poland near Kuznica, Poland, in this photograph released by the Polish Defence Ministry, November 10, 2021. (Reuters Photo)
by ASSOCIATED PRESS Nov 11, 2021 10:53 am

Fears that the authoritarian leader of Belarus is using migrants as a "hybrid warfare” tactic to undermine the security of the European Union are putting new strains on some of the values and laws in the 27-nation bloc.

The crisis at the eastern frontiers of Poland, Lithuania and Latvia is fueling calls for the EU to finance the construction of something it never wanted to build: fences and walls at the border.

And this idea was voiced this week at a ceremony commemorating the fall of one of Europe’s most notorious and historic barriers, the Berlin Wall.

The border crisis with Belarus has been simmering for months. Top EU officials say that President Alexander Lukashenko, angered by EU sanctions imposed on his regime after a crackdown on internal dissent following a disputed election in 2020, is luring thousands of migrants to Minsk with the promise of help to get to western Europe. Belarus denies it is using them as pawns.

The crisis came to a head after large groups of migrants gathered at a border crossing with Belarus near Kuznica, Poland. Warsaw bolstered security there, sending in riot police to turn back those who tried to cut through a razor-wire fence.

Polish lawmakers introduced a state of emergency and changed the country's asylum laws. Only troops have access to the area, to the dismay of refugee agencies and Poland’s EU partners. Lithuania is taking similar measures and has begun extending its border fence.

The EU’s executive branch, the European Commission, believes walls and barriers are ineffective and has so far resisted calls to fund them, although it will pay for infrastructure like surveillance cameras and equipment.

In the heightened security climate, that attitude may be changing.

"We are facing a brutal, hybrid attack on our EU borders. Belarus is weaponizing migrants’ distress in a cynical and shocking way,” European Council President Charles Michel said at an event in Germany on Tuesday, the 32nd anniversary of the fall of the Berlin Wall.

"We have opened the debate on the EU financing of physical border infrastructure. This must be settled rapidly because Polish and Baltic borders are EU borders. One for all and all for one,” Michel said.

That approach, and other border tactics, are sowing dismay. Addressing EU lawmakers Wednesday, U.N. High Commissioner for Refugees Filippo Grandi called for European leadership and appealed to the bloc to avoid "a race to the bottom” on migration policy.

"These challenges simply do not justify the knee-jerk reaction we have seen in some places; the irresponsible xenophobic discourse; the walls and barbed wire; the violent pushbacks that include the beating of refugees and migrants, sometimes stripping them naked and dumping them in rivers, or leaving them to drown in seas; the attempts to evade asylum obligations by paying other states to take on one’s own responsibilities,” Grandi said.

"The European Union, a union based on rule of law, should and can do better," he said.

About 8,000 migrants have entered from Belarus this year, and border guards have prevented about 28,000 attempted crossings, according to commission figures.

Monique Pariat, a senior commission home affairs official, said most are Iraqis or Syrians, flying to Minsk from Lebanon, Jordan, Syria and the United Arab Emirates (UAE). They pay a lot of money to a state-owned tourist company, which goes "into Lukashenko’s pockets,” she said.

It’s the last thing Europeans want to see. The entry in 2015 of well over 1 million people, most fleeing conflict in the Middle East, sparked the EU’s most intractable political crisis. They are unable to agree on who should take responsibility for the migrants and whether other EU countries should be obliged to help.

Greece and Italy were on the front line six years ago. Spain has received thousands of migrants in recent years. Now it’s the turn of Poland, Lithuania and Latvia.

Many in the West believe that Russian President Vladimir Putin supports Lukashenko in targeting Europe.

"They know very well that this is a subject that divides European Union member states. We must be very aware that it would be playing their game to bicker among ourselves,” Luxembourg conservative EU lawmaker Isabel Wiseler-Lima warned.

At a summit late last month, leaders of the bloc ordered the commission "to propose any necessary changes to the EU’s legal framework and concrete measures underpinned by adequate financial support to ensure an immediate and appropriate response.”

They want "stronger border protection” and new tools to avoid the "grave consequences of overburdened migration and asylum systems and exhausted accommodation capacities” that might hurt public trust in the EU's ability to act decisively.

The question is whether these tools would constitute "pushbacks” – the denial of entry to people, often by force, without affording them any opportunity to apply for asylum – which are illegal under international refugee treaties and EU law.

EU officials and U.N. agencies already worry that Poland is denying access to its border area near Belarus, where thousands have been refused entry in circumstances that cannot be independently verified. Eight people have died in the border no man’s land.

The commission is also examining recent changes to Polish law on the right to asylum, "which seems in this case not to be assured,” spokesperson Adalbert Jahnz said.

As tensions mount, security is tightening and old methods are again gaining favor.

"We must expect yet another significant migration crisis. Europe must protect its external borders, and time has proven that the only effective solution is physical barriers to secure European citizens against the mass arrival of illegal migrants,” Hungarian Prime Minister Viktor Orban wrote in a letter to the commission last week, seeking reimbursement for funds his government spent on its own border fences.