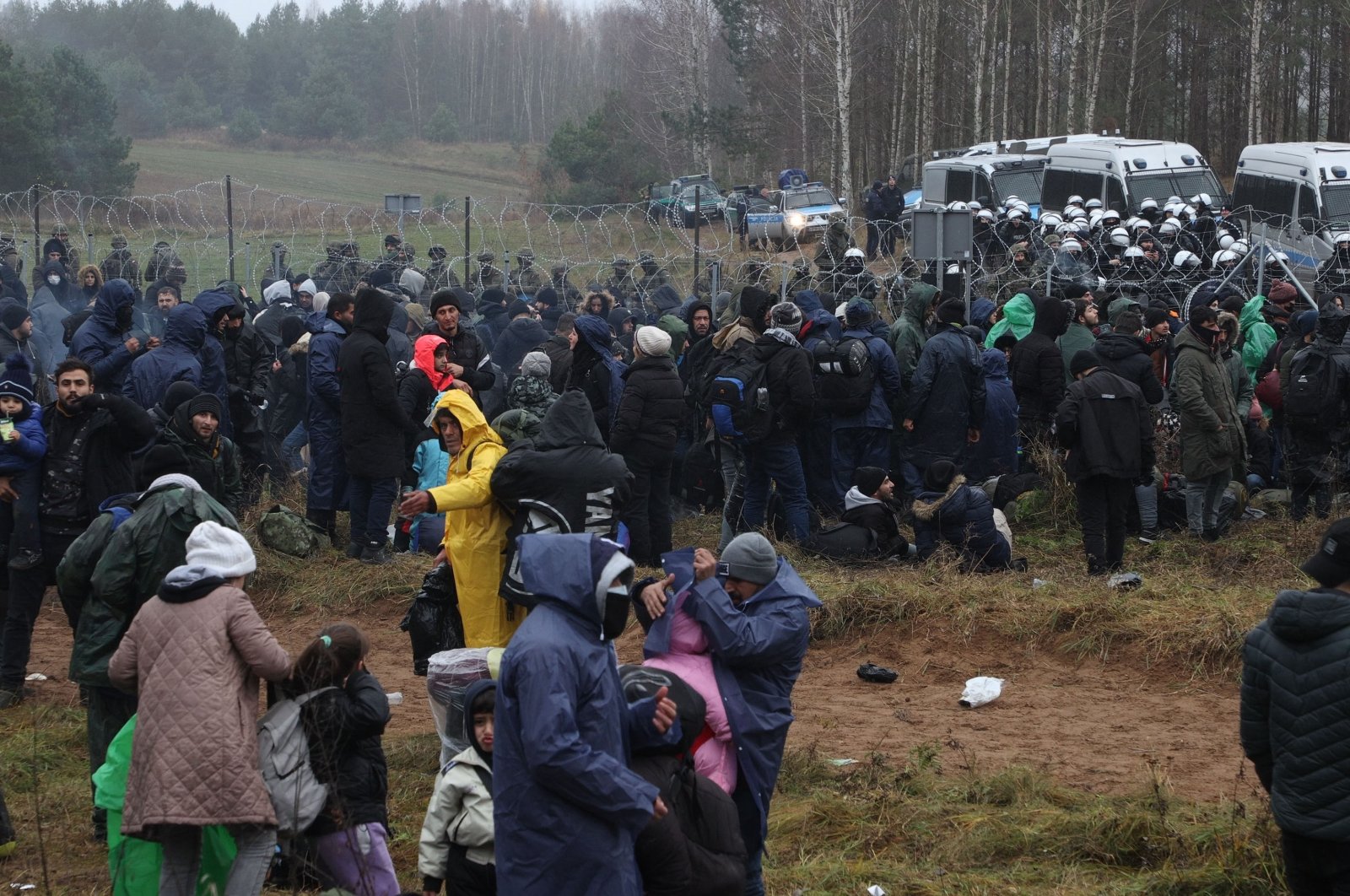 Hundreds of migrants gather at the Belarus side of the border with Poland near Kuznica Bialostocka, Poland, Nov. 9, 2021. (AA Photo)
by Agencies Nov 10, 2021 10:02 am
RECOMMENDED

There were many attempts to breach Poland's border with Belarus at night, Poland's defense minister told public radio on Wednesday.

"It was not a calm night. Indeed, there were many attempts to breach the Polish border. From what I have heard ... all those who breached were stopped," Mariusz Blaszczak told PR1, adding that 15,000 soldiers were already at the border.

Later on Wednesday, the country's police said they had detained over 50 migrants who crossed into Poland from Belarus over the last 24 hours and were still looking for others.

"Over the last 24 hours, police have detained over 50 people near Bialowieza after they illegally crossed the border," Tomasz Krupa, spokesperson for the Podlaskie regional police department, told Agence France-Presse (AFP), explaining that two separate groups of migrants were involved, some of whom had evaded detention.

Poland and other EU member states accuse Belarus of encouraging the migrants – from the Middle East, Afghanistan and Africa – to illegally cross the frontier into the EU in revenge for sanctions slapped on Minsk over human rights abuses.

Earlier the media reports said that two large groups of migrants have reportedly broken through the border from Belarus to Poland, the Deutsche Presse-Agentur (dpa) said. Several dozen people managed to destroy fences close to the villages of Krynki and Bialowieza and to cross the border, Polish news agency PAP reported late Tuesday, citing the Bialystok local radio station.

The broadcaster cited a border force spokesperson saying that in both cases the fences and barriers were violently torn down. Some migrants were taken back to Belarus, while others managed to flee, she said. There were hundreds of people on the Belarusian side.

Poland is refusing to let the migrants onto its territory and has sent hundreds of reinforcements to the border in recent weeks, as well as erecting a barbed wire fence, in an effort to stop any attempts by migrants to breakthrough.

Belarusian leader Alexander Lukashenko demanded Tuesday that they be allowed through into Poland. He said in an interview they mainly wanted to settle in Germany, not Poland.

Lukashenko, who has been dubbed "Europe's last dictator," has denied deliberately flying people in from nations in crisis like Syria, Afghanistan, Libya and Iraq and then moving them toward the EU border. The EU is currently planning fresh sanctions against Belarus, principally to target state airline Belavia for allegedly transporting migrants to Belarus.

The accusation came as thousands of desperate migrants were trapped in freezing weather on the Belarus-Poland border, where the presence of troops from both sides has raised fears of a confrontation. Morawiecki visited guards, troops and police at the border on Tuesday before turning his sights on Russia, Belarus' main international backer.

"This attack which Lukashenko is conducting has its mastermind in Moscow, the mastermind is President Putin," Morawiecki told the Polish parliament. He said migrants were being used as "human shields to destabilize the situation in Poland and the EU."

Germany, which accused Lukashenko of "unscrupulously" exploiting migrants by sending them to the Polish border, called Wednesday for new EU sanctions against Belarus.

"Lukashenko must realize that his calculations are not working," German Foreign Minister Heiko Maas said. "The European Union cannot be blackmailed."

EU diplomats told AFP the bloc was working to expand the existing sanctions. The EU said it was also pushing more than a dozen countries, mainly in the Middle East and Africa, to prevent their nationals from leaving for Belarus.

"We are not seeking a fight," Lukashenko told the state news agency Belta. "I am not a madman, I understand perfectly well where it can lead," he added.

"But we will not kneel."

"Why, when it comes to refugees heading to the European Union from Turkey, did the EU provide funding to keep them on Turkish territory?" he told reporters. "Why can't the Belarusians be helped in the same way?"

Both Poland and Belarus said Tuesday that between 3,000 and 4,000 migrants were now in an improvised camp at the border, near the Polish village of Kuznica. Journalists have been blocked from the area, but videos released by Belarusian and Polish authorities showed the migrants massed along the razor-wire, huddling by fires and in tents as temperatures hovered around freezing.

"The situation is aggravated by the large number of pregnant women and infants among the refugees, who must spend the night on the ground in negative temperatures," the Belarusian border guard service said.

Thousands of migrants have crossed or attempted to cross from Belarus into the eastern EU member states of Latvia, Lithuania and Poland in recent months. Lithuanian lawmakers voted Tuesday to impose a state of emergency along the Belarus border, effective from midnight.

Some migrants who made it into Poland told AFP last month that they had been trapped in the woods for a week, with Belarus refusing to allow them to return to Minsk and fly home, while Poland would not let them cross to make asylum claims.

Warsaw has drawn sharp criticism for its hardline approach to the crisis that has seen guards routinely push back migrants and refugees on the border.