Navalny's allies put under house arrest ahead of protests 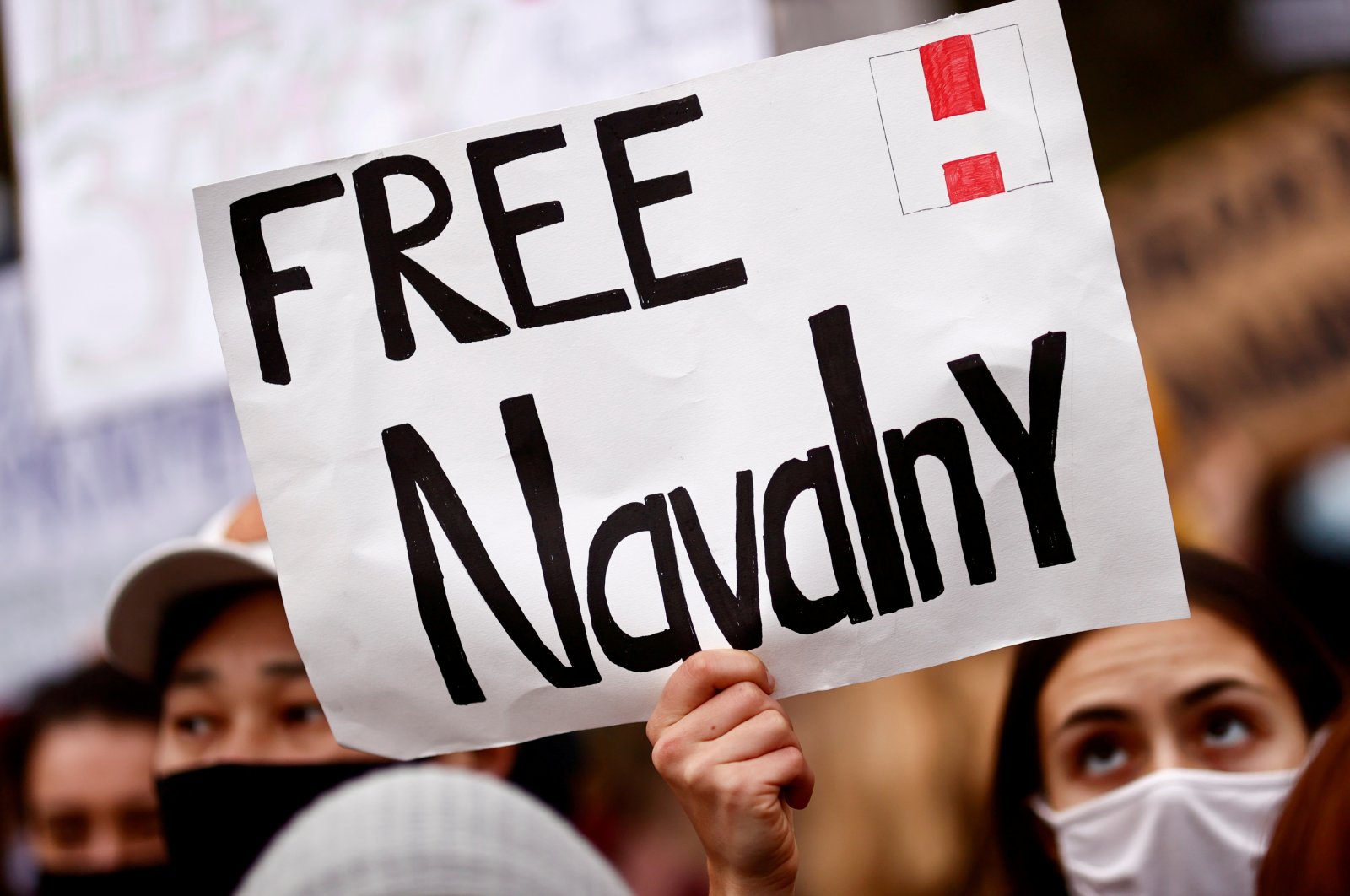 People participate in a rally demanding the release of Russian opposition leader Alexei Navalny at the Trocadero square in front of the Eiffel tower, in Paris, France, Jan. 23, 2021. (Reuters Photo)
by ASSOCIATED PRESS Jan 29, 2021 8:39 pm
RECOMMENDED

Red Cross registers hundreds of prisoners of war from Mariupol

A Moscow court on Friday put the brother and several allies of Russian opposition leader Alexei Navalny under house arrest for two months as authorities sought to stymie more protests over the jailing of the top Kremlin foe. Navalny's supporters called for rallies on Sunday to demand his release.

Tens of thousands of people demonstrated across Russia last weekend to protest his Jan. 17 arrest and 30-day detention. The 44-year-old Navalny, the anti-corruption investigator and the best-known critic of President Vladimir Putin’s government was arrested upon returning from Germany, where he spent five months recovering from nerve-agent poisoning that he blames on the Kremlin. Russian authorities have rejected the accusations.

Navalny was jailed for 30 days after Russia’s prison service alleged he had violated the probation terms of his suspended sentence from a 2014 money-laundering conviction that he has rejected as politically motivated. On Thursday, a Moscow court rejected his appeal to be released, and another hearing next week could turn his 3 1/2-year suspended sentence into one he must serve in prison. Navalny's brother, Oleg, served a 3 1/2-year sentence after being convicted in the same case in what was widely seen as an attempt to pressure the opposition leader.

As part of government efforts to stem the protests, police detained Navalny’s brother, his top ally, Lyubov Sobol; Oleg Stepanov, the head of Navalny’s Moscow office; Dr. Anastasia Vasilyeva from the Navalny-backed Alliance of Doctors; and Maria Alekhina from the Pussy Riot punk collective. They were detained for 48 hours as part of a criminal probe into alleged violations of coronavirus regulations during last weekend’s protests.

On Friday, Moscow's Tverskoy District Court put them under house arrest until March 23 as requested by investigators. In a strong challenge to the Kremlin, demonstrations calling for Navalny’s release took place in more than 100 Russian cities on Jan. 23. Nearly 4,000 people were reportedly detained at those protests, and some were given fines and jail terms. In Moscow, over 1,600 people have been charged with violations, and 154 received jail terms ranging from seven to 15 days for their involvement in the protests, the Moscow City Court said Friday. Russia’s Investigative Committee said it put Navalny’s top strategist, Leonid Volkov, on the wanted list on charges of encouraging minors to participate in unauthorized rallies.

Volkov, who has lived abroad since 2019, has rejected the charges. As part of a multipronged effort by the authorities to discourage Russians from attending Sunday's demonstrations, the Prosecutor General's office ordered the state communications watchdog, Roskomnadzor, to block the calls for joining the protests on the internet. The Prosecutor General's office and the Interior Ministry also issued stern warnings to the public not to join the protests, saying participants could face criminal charges of taking part in mass riots if the rallies turn violent.

That carries a prison sentence of up to eight years, and those engaging in violence against police could face up to 15 years. Navalny’s arrest and the harsh police actions at the protests have brought wide criticism from the West and calls for his release. Appearing in court via video link from the Matrosskaya Tishina jail, Navalny on Thursday denounced the criminal proceedings against him as part of a government campaign to intimidate the opposition.

"You won’t succeed in scaring tens of millions of people who have been robbed by that government,” he said. "Yes, you have the power now to put me in handcuffs, but it’s not going to last forever.” Raising the heat on Putin just after Navalny's arrest, his team released a two-hour video on his YouTube channel about a lavish Black Sea residence purportedly built for the president that features amenities like an "aqua-discotheque,” an opulent hookah lounge equipped for watching pole dances and a casino.

The video has been viewed over 100 million times and drew a stream of sarcastic jokes on the internet. Putin has said that neither he nor any of his close relatives own the property, and the Kremlin has insisted it has no relation to the president even though it's protected by the federal bodyguard agency FSO that provides security for top government officials. In an apparent bid to contain the damage to Putin's image, Russian state television reported from the compound that showed it under construction and included an interview with an engineer who claimed the building would be a luxury hotel. Navalny fell into a coma on Aug. 20 while on a domestic flight from Siberia to Moscow.

He was transferred to a Berlin hospital two days later. Labs in Germany, France and Sweden, and tests by the Organization for the Prohibition of Chemical Weapons, established that he was exposed to the Soviet-era Novichok nerve agent. Russian authorities have refused to open a full-fledged criminal inquiry, citing a lack of evidence that he was poisoned.

Red Cross registers hundreds of prisoners of war from Mariupol