Russian court keeps Navalny in jail ahead of fresh rallies 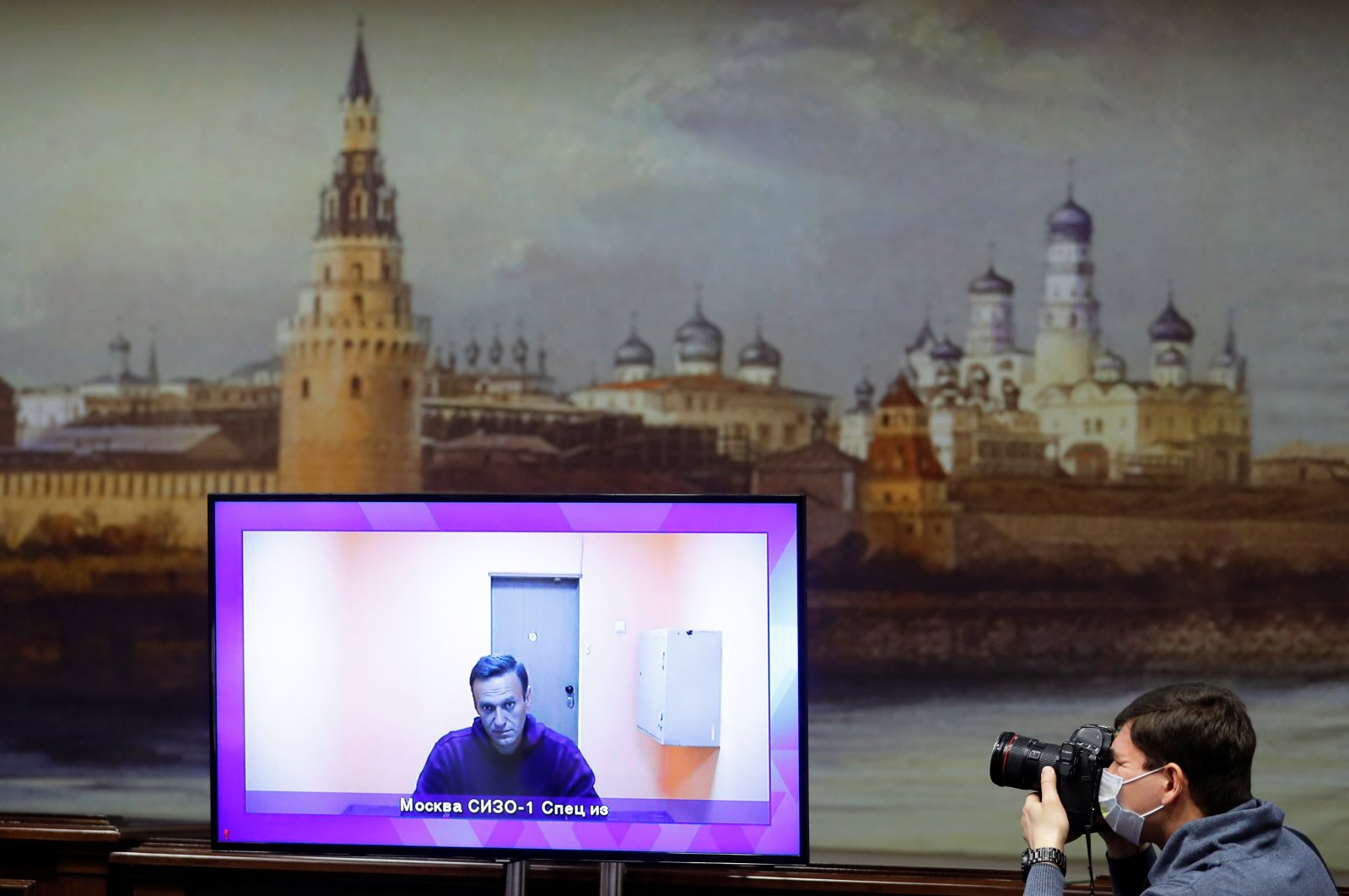 A photographer takes pictures of a screen showing Russian opposition leader Alexei Navalny via a video link during a court hearing to consider an appeal on his arrest outside Moscow, Russia, Jan. 28, 2021. (Reuters Photo)
by Agencies Jan 28, 2021 5:47 pm
RECOMMENDED

The Kremlin's archenemy Alexei Navalny will remain in jail, a Russian court ruled Thursday, rejecting an appeal over his arrest ahead of anti-government protests this weekend.

Appearing in court by video link from jail, Navalny denounced the Kremlin's criminal proceedings against him as part of the government's efforts to intimidate the opposition.

"You won't succeed in scaring tens of millions of people who have been robbed by that government,” he said, according to remarks carried by The Associated Press (AP). "Yes, you have the power now to put me in handcuffs, but it's not going to last forever.”

Several of his allies were detained following police raids on their apartments and offices hours before the verdict and in the run-up to Sunday's rally outside Russia's Federal Security Service's (FSB) headquarters.

"This is blatant lawlessness to intimidate me and other people," Navalny told the court.

Police detained President Vladimir Putin’s critic at a Moscow airport after he returned to Russia on Jan. 17 from Germany, where he had been recovering from a near-fatal poisoning by a nerve toxin. The dissident was arrested and jailed for 30 days at the request of Russia's penitentiary service, which charged that he violated the probation terms of his suspended sentence from a 2014 money-laundering conviction that Navalny rejected as politically driven. He is also currently facing accusations in two separate criminal probes.

Police on Wednesday carried out searches at Navalny's flat in Moscow and at the homes of his allies over alleged violations of coronavirus restrictions during anti-Kremlin protests last week. Ivan Zhdanov, the head of Navalny's FBK Anti-Corruption Foundation, said prominent aide Lyubov Sobol and Navalny's brother Oleg were detained for 48 hours as suspects in a probe launched by the interior ministry. Searches were also carried out at the flat of Navalny's wife Yulia and at the office of the FBK, which is known for its investigations into the wealth of Russia's elites. Police also arrived at the home of Navalny's doctor Anastasia Vasilyeva, who was detained for 48 hours too. In a video posted on Twitter by Vasilyeva's press secretary, the doctor was playing Beethoven on a piano as people in uniform arrived at the door.

Putin's spokesperson Dmitry Peskov said the searches and detentions are a legitimate part of police efforts to investigate the alleged violations during the events. "Law enforcement agencies are doing their job,” Peskov said during a conference call with reporters. "There were numerous violations of Russian laws, and law enforcement agencies are at work.”

Moscow police on Thursday issued a notice to the public not to join protests Sunday, warning that officers would act resolutely to disperse unsanctioned rallies and bring participants to justice.

Asked if a refusal to remove such content could prompt Russian authorities to block the platforms, Peskov said it would be up to relevant government agencies to consider a response. "All pros and cons will be weighed and, if necessary, measures envisaged by the law will be taken,” he said.

The Investigative Committee, which probes major crimes, said it had launched a probe against Leonid Volkov, the head of Navalny's regional network, for persuading young people to protest. The opposition plans to hold more rallies on Sunday, which in Moscow will take place outside the headquarters of the FSB.

The Moscow prosecutor's office said it had sent out warnings ahead of Sunday's rally to six individuals and five internet platforms, without naming them. Despite pressure from authorities and threats of arrest, the opposition appears unwilling to back down. Volkov said on Telegram that Sunday's rallies will take place "despite searches and late-night interrogations, despite the 4,000 arrests last week, despite the lies and intimidation of Kremlin propaganda."

Political analyst Alexander Baunov of the Carnegie Moscow Center told Agence France-Presse (AFP) that Navalny's continued protest of the government was evidence that he was "ready to pay the price to become a real counterweight to Putin."

"What Navalny wants to do now is to prepare for a situation when he, as the main opposition leader, can become a real contender for power," he said.