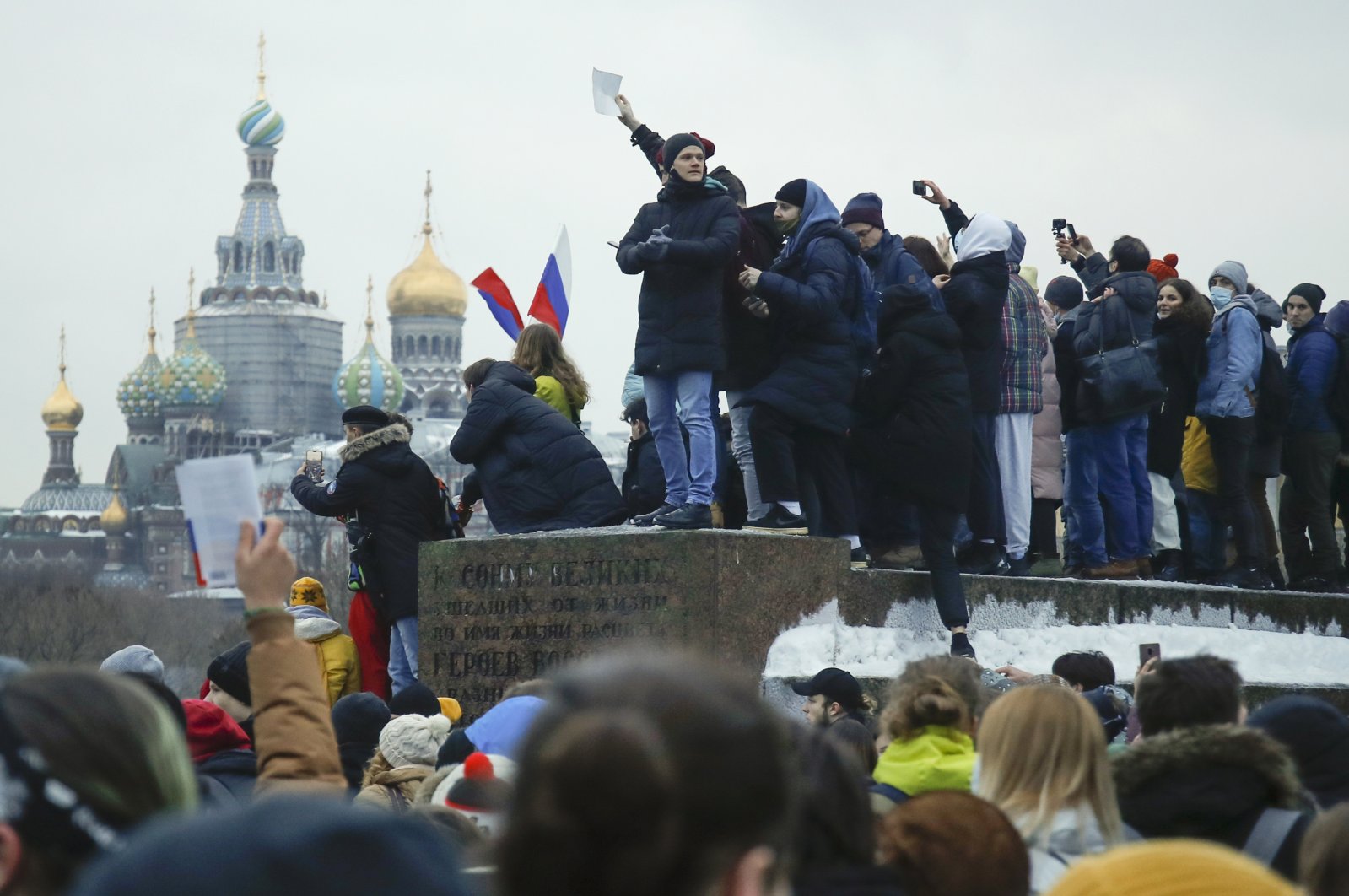 Russian police arrested more than 3,000 people as the Kremlin faces a revolt in regions with thousands of protesters demanding the release of opposition leader Alexei Navalny

Thousands of protesters took to the streets across Russia Saturday in support of opposition politician Alexei Navalny, who was detained by the country's authorities on Jan. 17 at Sheremetyevo airport and jailed for 30 days as he was traveling home after spending five months in Germany, where he received emergency medical treatment following his poisoning with the nerve agent Novichok.

The protests in scores of cities in temperatures as low as minus 50 degrees Celsius (minus 58 degrees Fahrenheit) highlighted how Navalny has built influence far beyond the political and cultural centers of Moscow and St. Petersburg. Ignoring extreme cold and police warnings, an estimated 40,000 protesters gathered in and around Moscow's Pushkin Square, where clashes with police broke out and demonstrators were roughly dragged off by helmeted riot officers to police buses and detention trucks. Some were beaten with batons. According to The Associated Press (AP), police detained more than 3,000 people and used force to break up rallies across Russia. Navalny’s wife, Yulia Navalnaya, was among those arrested in Moscow.

Police eventually pushed demonstrators out of the square. Thousands then regrouped along a wide boulevard about a kilometer (half-mile) away, many of them throwing snowballs at the police before dispersing. Some later went to protest near the jail where Navalny is being held. Police made an undetermined number of arrests there. The protests stretched across Russia’s vast territory, from the island city of Yuzhno-Sakhalinsk north of Japan and the eastern Siberian city of Yakutsk, where temperatures plunged to minus 50 degrees Celsius, to Russia’s more populous European cities.

The main symbol of the demonstrations became a toilet brush from Navalny's Anti-Corruption Foundation's (FBK) investigation into a lavish Black Sea property he claimed is owned by Russian President Vladimir Putin and the snowballs that protesters threw at police.

Russia accuses Navalny of breaking the terms of a suspended sentence and probation, but critics say the main reason for his detention is completely different from the official statement. Authorities say his stay in Germany violated terms of a suspended sentence in a 2014 criminal conviction, while Navalny says the conviction was for made-up charges. The 44-year-old activist is well known nationally for his reports on the corruption that has flourished under Putin's government.

The FBK's investigation, published on the opposition figure's blog with an accompanying two-hour YouTube video recorded before his return to Russia, claims the property cost $1.35 billion and was paid for "with the largest bribe in history." The report alleges that the property, located along Russia's southern Black Sea coast, is 39 times the size of Monaco and features a casino inside a 17,691-square-meter mansion, along with an ice rink and vineyards.

The investigation claims that Russia's Federal Security Service (FSB) owns some 7,000 hectares (around 17,300 acres) of land surrounding the property and that the complex was financed by Putin's close allies, including Igor Sechin, chief of Russian oil giant Rosneft, and billionaire tycoon Gennady Timchenko, as Agence France-Presse (AFP) reported.

The existence of the Black Sea property and its links to Putin first became known in 2010 when whistle-blower businessperson Sergei Kolesnikov described them in a public letter to Medvedev. Kremlin spokesperson Dmitry Peskov on Tuesday brushed aside the claims in comments to the state news agency RIA Novosti, calling them "untrue." The video accompanying Navalny's investigation had garnered 75 million views within the first five days after it was published Tuesday.

The OVD-Info group, which monitors political arrests, said at least 1,167 people were detained in Moscow and more than 460 at another large demonstration in St. Petersburg. Overall, it said 3,068 people had been arrested in some 90 cities, revising the count down from its earlier report of 3,445. Undeterred, Navalny's supporters called for protests again next weekend.

His wide support puts the Kremlin in a strategic bind. Officials are apparently unwilling to back down by letting him go free, but keeping him in custody risks more protests and criticism from the West. In a statement, the U.S. State Department condemned "the use of harsh tactics against protesters and journalists this weekend in cities throughout Russia” and called on Russian authorities to immediately release Navalny and all those detained at protests. In Berlin, Hamburg and Munich, nearly 1,000 people demonstrated against Navalny's arrest. Small demonstrations were also held in Bulgaria and some 200-300 people protested in Paris.

Navalny faces a court hearing in early February to determine whether his sentence in the criminal case for fraud and money laundering – which Navalny says was politically motivated – will be converted to 3 1/2 years behind bars.

Moscow police on Thursday arrested three top Navalny associates, two of whom were later jailed for periods of nine and 10 days. Navalny fell into a coma while aboard a domestic flight from Siberia to Moscow on Aug. 20. He was transferred from a hospital in Siberia to a Berlin hospital two days later. Labs in Germany, France and Sweden, and tests by the Organization for the Prohibition of Chemical Weapons (OPCW), established that he was exposed to the Soviet-era Novichok nerve agent.

Russian authorities insisted that the doctors who treated Navalny in Siberia before he was airlifted to Germany found no traces of poison and have challenged German officials to provide proof of his poisoning. Russia refused to open a full-fledged criminal inquiry, citing a lack of evidence that Navalny was poisoned. Last month, Navalny released the recording of a phone call he said he made to a man he described as an alleged member of a group of officers of the FSB, who purportedly poisoned him in August and then tried to cover it up.

The FSB dismissed the recording as fake. Navalny has been a thorn in the Kremlin’s side for a decade, unusually durable in an opposition movement often demoralized by repressions. He has been jailed repeatedly in connection with protests and twice was convicted of financial misdeeds in cases that he said were politically motivated. He suffered significant eye damage when an assailant threw disinfectant in his face. He was taken from jail to a hospital in 2019 with an illness that authorities said was an allergic reaction but which many suspected was a poisoning.