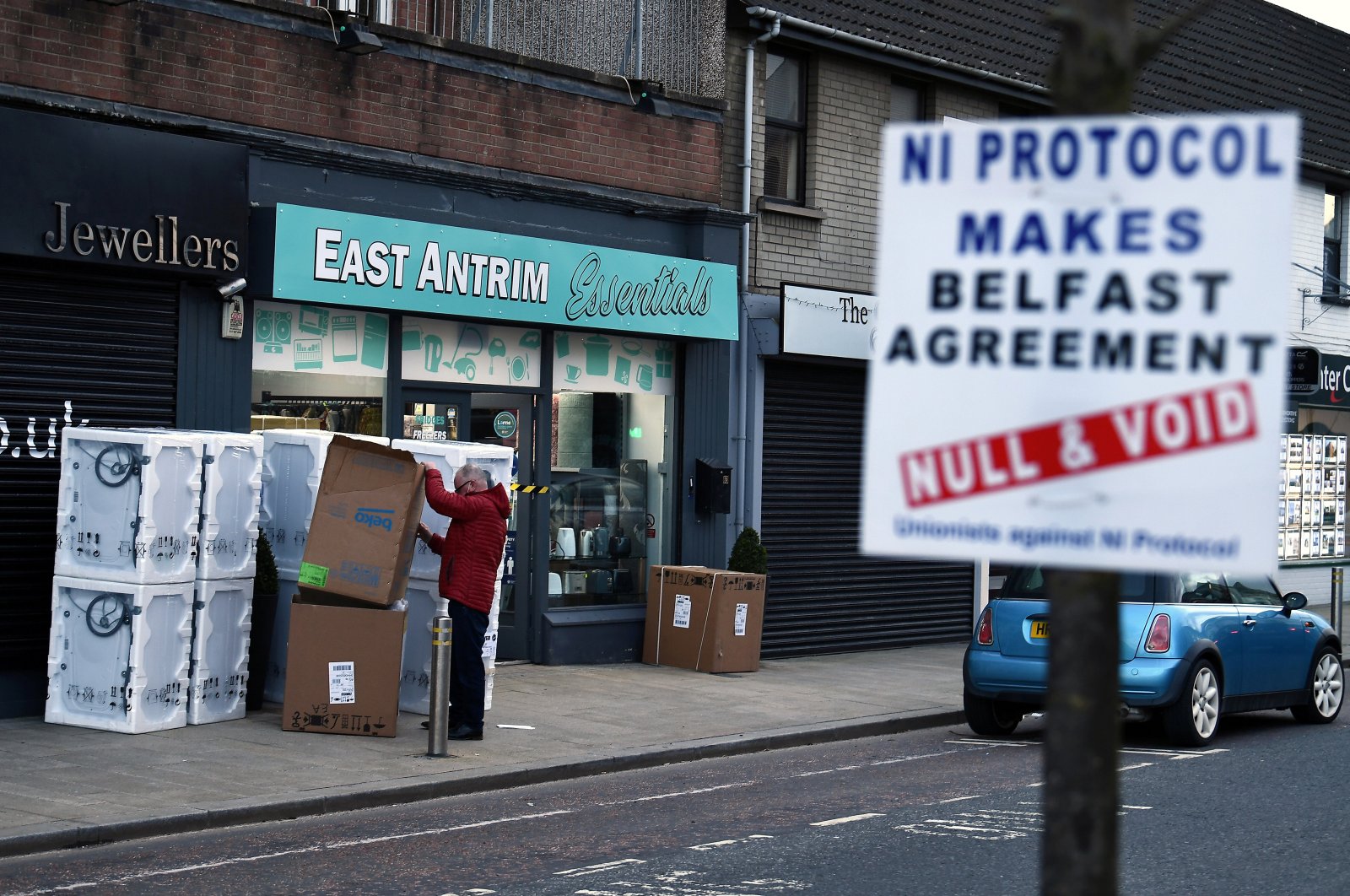 A man sorts through a delivery of washing machines, while a sign is seen across the road with a message against the Brexit border checks in relation to the Northern Ireland protocol, Larne, Northern Ireland, Feb. 12, 2021. (REUTERS)
by REUTERS Mar 19, 2021 4:06 pm
RECOMMENDED

The 1998 Northern Irish peace deal, known as the Good Friday Agreement, is under threat, and a Pandora's box of protest and political crisis will be opened unless the European Union agrees to significant changes to the Brexit deal, a senior loyalist warned on Friday.

The 1998 peace deal, known as the Belfast or Good Friday Agreement, ended three decades of violence between mostly Catholic nationalists fighting for a united Ireland and mostly Protestant unionists, or loyalists, who want Northern Ireland to stay part of the United Kingdom.

But David Campbell, chairperson of the Loyalist Communities Council which represents the views of loyalist paramilitaries, said he was calling for dialogue with the EU and Ireland to change the Northern Irish Protocol which he said had breached fundamental principles of the 1998 deal.

"If it doesn’t happen, then they are opening a Pandora’s box which leads to significant protest, to the bringing down of the Northern Ireland executive and then into a significant political crisis," Campbell said.

Northern Irish loyalist paramilitary groups told British Prime Minister Boris Johnson earlier this month that they are temporarily withdrawing support for the peace agreement due to concerns over the Brexit deal.

"Loyalists are extremely angry right across the community," Campbell said, adding that the community was more angry than at any other time since the 1985 Anglo-Irish Agreement which gave the Ireland a role in the governance of Northern Ireland.

"It's an anger that transcends class and age groups – eighty-year-olds are just as vexed as teenagers are – so it has succeeded in uniting all the disparate unionist groups and parties," he said.

Unionists say the Brexit deal is unfair as it prevents a hard border between Northern Ireland and Ireland but effectively cuts Northern Ireland off from the rest of the United Kingdom by creating a border in the Irish sea.

Campbell said that as such, the Brexit deal was one-sided and breached the principle of the 1998 deal which effectively gave each community a veto over changes that could have a significant impact on the future of Northern Ireland.

"The peace agreement is certainly under threat," Campbell said, adding that the devolved power-sharing government of Northern Ireland was likely to collapse.

"Unless there are changes, I can’t see the Northern Ireland executive being sustained beyond the ending of the current pandemic," he said, adding that there will be significant protests over coming months and going into the summer.

So is Northern Ireland on the brink?

"I was one of the unionist negotiators in the talks and for 20 odd years we have worked constructively together and you potentially face the undoing of that," he said.

"The current leaderships of the loyalist organisations are under extreme pressure from, let's just say, the young Turks who perhaps see an opportunity to go to war on their terms."