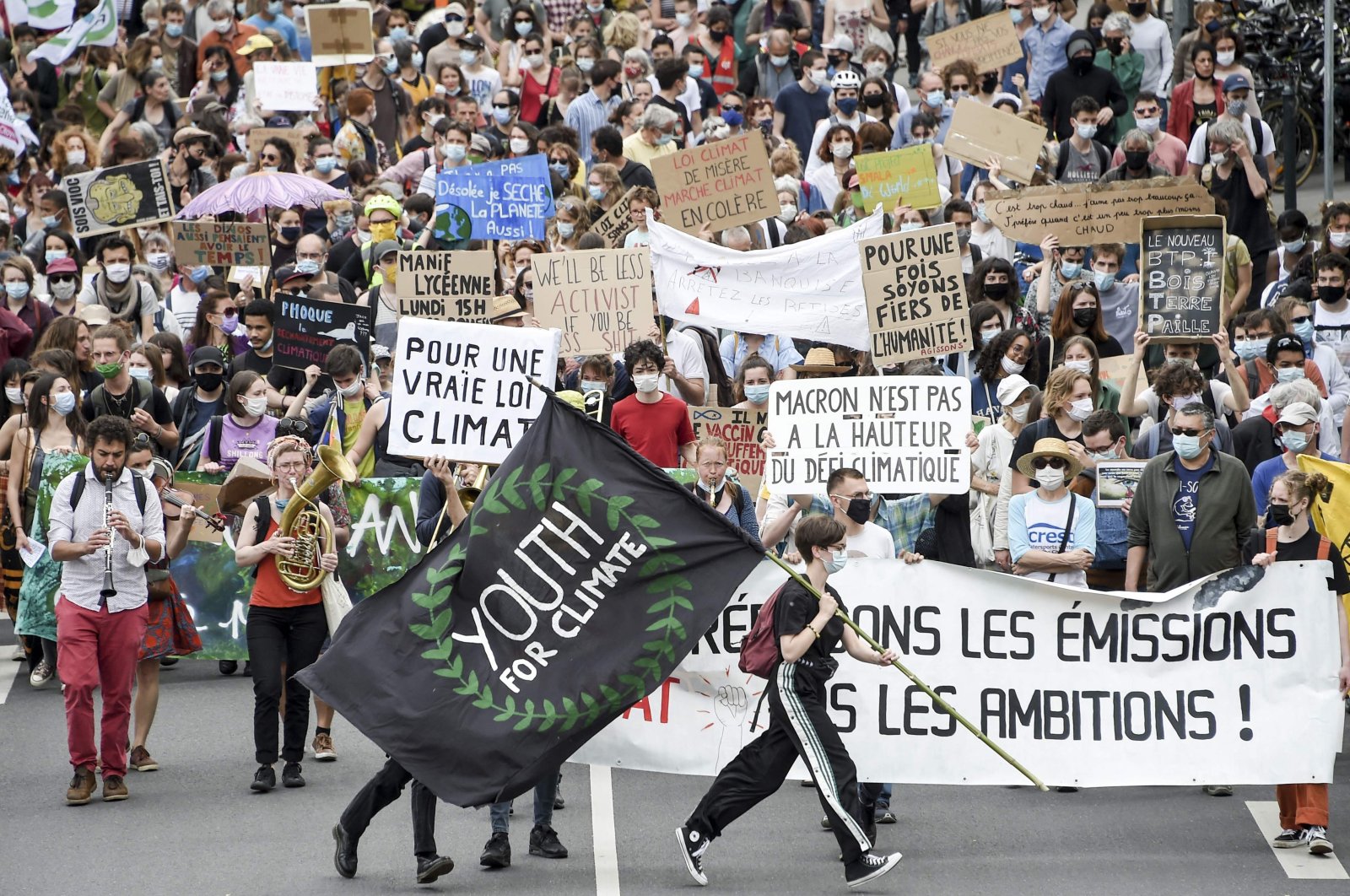 A demonstrator holds a flag reading "Youth for Climate" during a "march for climate" called by several NGOs and unions as part of a national day of action to demand climate justice in Nantes, western France, May 9, 2021. (AFP Photo)
by Associated Press May 09, 2021 10:48 pm
RECOMMENDED

Tens of thousands of people on Sunday marched across France, taking to the streets in Paris and several other cities as they called for more ambitious actions to combat climate change after President Emmanuel Macron's promise to bring a constitutional aspect to the fight fell short.

"As it stands, the (proposed) law is a climatic and social failure," said a group of climate campaigners, “Ensemble pour le climat,” meaning “Together for climate.” Meanwhile, Greenpeace France denounced "the government's refusal to take action for the climate."

Activists blame Macron, who has been very vocal about his support for climate change action, for having "weakened" a set of measures initially proposed by a panel of 150 citizens who had worked for months on the issue.

Sarah Moore of the Paris-based nongovernmental organization International Science Council said, "We are all here because we are in an extremely urgent situation ... I think France is in a position to do something very strong with the 2015 Paris Agreement and in fact, we're not doing anything."

Victor Duong, 32, a senior executive in Paris, said: "We want to have more concrete policy actions. We want countries to commit to emitting less carbon, to being more respectful of the environment, in terms of recycling, agriculture, our way of consuming."

The bill, which will now be debated in the Senate, includes a ban on domestic flights under two and half hours that can be done by train and measures to support renovation of high energy-consuming buildings and encourage greener cars.

Meanwhile, French newspaper Journal du Dimanche reported Sunday that a referendum to include the need to preserve the environment into the French Constitution, promised by Macron, won't be able to take place.

The change requires a parliamentary vote. The National Assembly, where Macron has a majority, largely approved it in March. However, no deal has been found in the Senate, where the conservative party holds a majority.

Macron, speaking on the margins of a European Union event in the French city of Strasbourg, said the referendum bill "won't be abandoned."

"The text will continue living its parliamentary life, which is the only way to get a referendum on condition senators and deputies agree," he said, stressing the process is still several steps away from a definite vote in parliament.

Macron's office said that "the environment issue remains one of the priorities of the president."

About a third of France's 100 billion-euro ($122 billion) rescue plan to help the economy recover from the coronavirus pandemic by next year will go to reducing emissions and protecting biodiversity.

Macron also pushed for beefing up the EU's 2030 targets to reduce greenhouse gases by at least 55% compared with 1990 levels – up from the previous 40% target. Last month, the EU reached a tentative climate deal to put the 27-nation bloc on a path to being "climate neutral" by 2050.