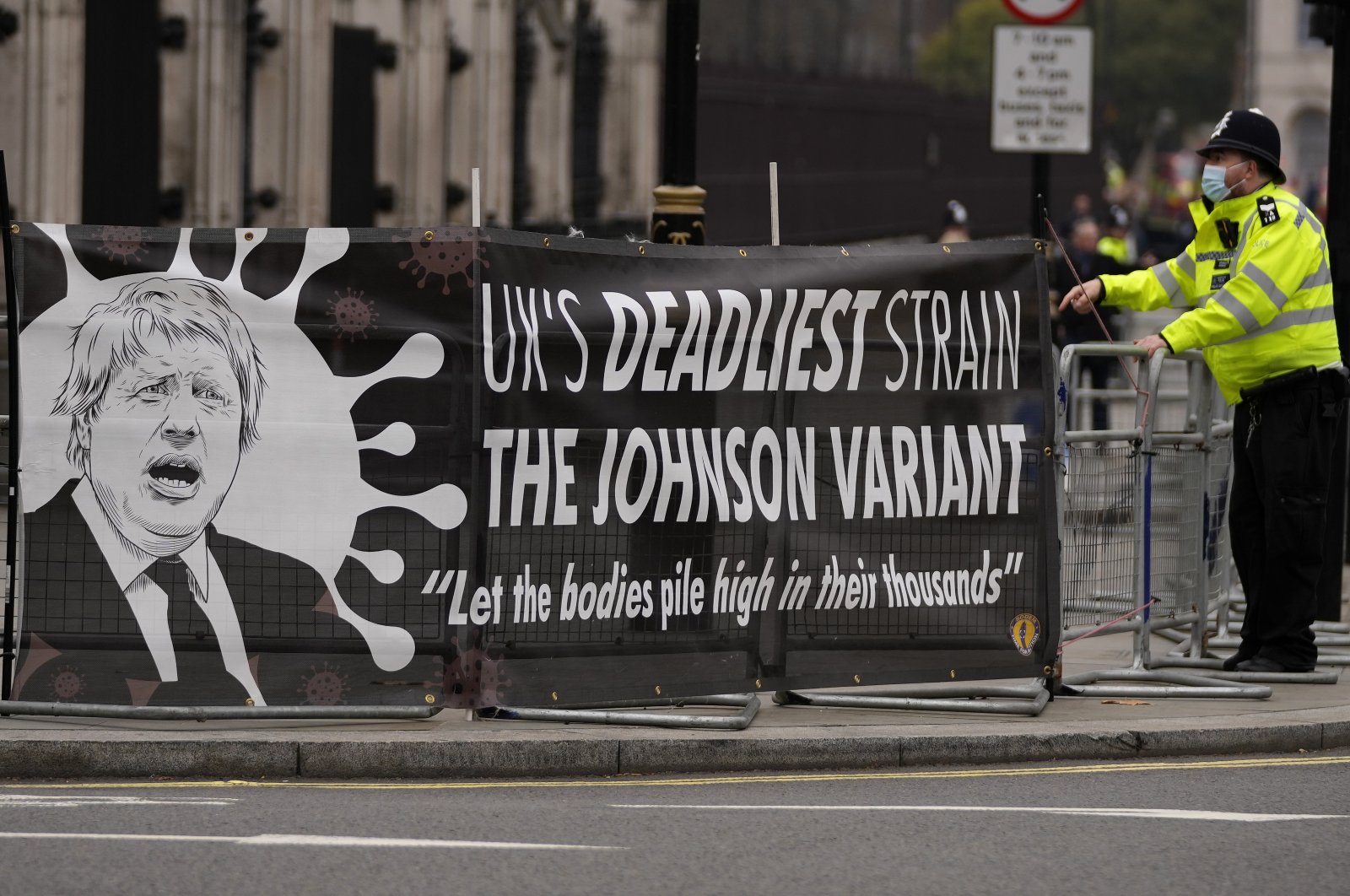 US puts 8,500 troops on alert amid Ukraine tensions with Russia

As the new COVID-19 variant – dubbed the omicron strain by the World Health Organization (WHO) – triggers tough restrictions globally, opposition to travel bans this week has been growing fiercer, with some international leaders calling the measures unfair and premature.

The blanket restrictions were slammed by international health organizations as well as by South African President Cyril Ramaphosa, who voiced his concern over unjustified travel bans against his country and neighboring states earlier last week.

The WHO warned Tuesday that travel restrictions will not prevent the spread of omicron, as more countries rushed to impose curbs and the first case of the new COVID-19 strain was detected in the U.S.

In a travel advisory, the WHO warned the bans could ultimately dissuade countries from sharing data about the evolving virus. But it did advise that unvaccinated people vulnerable to COVID-19, including over-60s, should avoid travel to areas with community transmission of the virus.

WHO chief Tedros Adhanom Ghebreyesus said it was understandable for countries to seek to protect their citizens "against a variant we don't yet fully understand." But he called for the global response to be "calm, coordinated and coherent," urging nations to "take rational, proportional risk-reduction measures."

The likely futility of broad travel restrictions was underscored as Dutch authorities reported that omicron was present in the country before South Africa officially reported its first cases on Nov. 25. The new variant – whose high number of mutations the WHO believes may make it more transmissible or resistant to vaccines – was found in two Dutch test samples from Nov. 19 and 23, with one having no travel history.

So far, well over a dozen countries and territories have detected cases, including Australia, Britain, Canada, Hong Kong, Israel, Italy and Portugal. The first known U.S. case was a fully vaccinated person in California who returned to the United States from South Africa on Nov. 22 and tested positive seven days later.

President Joe Biden is working on the U.S. strategy for fighting COVID-19 this winter and sources briefed on the matter told Reuters one step will be extending requirements for travelers to wear masks through mid-March. A formal announcement is expected on Thursday, the sources said. The White House also plans to announce stricter testing rules for international visitors.

Airlines in the United States were told to hand over the names of passengers arriving from parts of southern Africa hit by omicron, according to a U.S. Centers for Disease Control and Prevention (CDC) letter seen by Reuters.

In South Africa, outraged President Cyril Ramaphosa accused four African countries – Rwanda, Mauritius, Seychelles and Egypt – which imposed travel restrictions due to the omicron variant, of acting like "ex-colonialists" who closed their doors to Africa. In his press statement Wednesday before his trip to West Africa, Ramaphosa said "we would prefer that they not react to Africa like our former colonialists, who immediately closed their doors."

"We think it is a great misfortune that they also participate in these bans. We think that this is unscientific," he said, adding that he wants to discuss the travel bans with these countries.

Inviting the countries of the world to lift travel restrictions on South Africa, Ramaphosa pointed out that these bans will have a devastating effect on the economies of the region, which are trying to cope with the difficulties brought by the COVID-19 pandemic. Last week Ramaphosa said the curbs on travel from African countries were scientifically unjustified and called for them to be "immediately and urgently" reversed. Health Minister Joe Phaahla said many South Africans had felt the country had hastened to go public with the discovery of the new omicron variant and that had it "kept quiet, travel bans would not have happened."

"With a virus that is truly borderless, travel restrictions that isolate any one country or region are not only deeply unfair and punitive – they are ineffective," Guterres said at a news conference, suggesting instead increased testing for travelers. Guterres said countries that had reported the emergence of the new strain should not "be collectively punished for identifying and sharing crucial science and health information with the world."

He reiterated an appeal to governments to implement augmented testing measures for travelers, "together with other appropriate and truly effective measures."

"This is the only way to reduce the risk of transmission while allowing for travel and economic engagement."

Officials in South Africa have said they are being punished for identifying a strain that has now been detected everywhere from the Netherlands to Britain, Canada and Hong Kong, while Malawi's President Lazarus Chakwera accused Western countries of "Afrophobia."

Around the world, curbs have been met with massive hostility. Greeks who are over the age of 60 and refuse coronavirus vaccinations could be hit with monthly fines of more than one-quarter of their pensions – a get-tough policy that the country's politicians say will cost votes but save lives. In Israel, potential carriers of the new omicron variant could be tracked by the nation's formidable spy agency in seeming defiance of a Supreme Court ruling from the last go-round.

Weekly protests in the Netherlands over the country's 5 p.m. lockdown and other new restrictions have descended into violence, despite what appears to be overwhelming acceptance of the rules.

With the delta variant of COVID-19 pushing up cases in Europe and growing fears over the omicron variant, governments around the world are weighing new measures for populations tired of hearing about restrictions and vaccines.

It's a thorny calculus made more difficult by the prospect of backlash, increased social divisions and, for many politicians, the fear of being voted out of office.

"I know the frustration that we all feel with this omicron variant, the sense of exhaustion that we could be going through this all over again," British Prime Minister Boris Johnson said Tuesday, two days after the government announced that masks would be mandatory again in stores and on public transportation and required all visitors from abroad to undergo a COVID-19 test and quarantine. "We're trying to take a balanced and proportioned approach."

New restrictions, or variations on the old ones, are cropping up around the world, especially in Europe, where leaders are at pains to explain what looks like a failed promise: that mass vaccinations would mean an end to widely loathed limitations.

"People need normality. They need families, they need to see people, obviously safely, socially distancing, but I really think, this Christmas now, people have had enough," said Belinda Storey, who runs a stall at a Christmas market in Nottingham, England.

In the Netherlands, where the curfew went into effect last week, mounted police patrol to break up demonstrations against the new lockdown, which is among the world's strictest. But most people appeared resigned to rush through errands and head home.

"The only thing we can do is to listen to the rules, follow them and hope it's not getting worse. For me it's no problem. I'm a nurse. I know how sick people get," said Wilma van Kampen.

In Greece, residents over 60 face fines of 100 euros ($113) a month if they fail to get vaccinated. The fines will be tacked onto tax bills in January. About 17% of Greeks over 60 are unvaccinated despite various efforts to prod them to get their shots, and nine in 10 Greeks currently dying of COVID-19 are over 60.

Employing a carrot instead of a stick, Slovakia's government is proposing to give people 60 and older a 500-euro bonus if they get vaccinated.

In Israel, the government this week approved resuming the use of a controversial phone-monitoring technology to perform contact tracing of people confirmed to have the omicron variant.

Israeli rights groups have decried the use of the technology as a violation of privacy rights, and others have noted that its accuracy in indoor places is flawed, leading to large numbers of people being wrongly flagged. The Supreme Court earlier this year issued a ruling limiting its use.

"We need to use this tool in extreme situations, and I am not convinced we are in that kind of situation," Justice Minister Gideon Saar told Israeli public broadcaster Kan this week.

In the U.S., there is little appetite in either political party for a return to lockdowns or strict contact tracing. Enforcing even simple measures like mask-wearing has become a political flashpoint. And Republicans are suing to block the Biden administration's new get-vaccinated-or-get-tested requirement for large employers.

Chile has taken a harder line since the emergence of omicron: People over 18 must receive a booster dose every six months to keep their pass that allows access to restaurants, hotels and public gatherings. And Chile never dropped its requirement to wear masks in public – probably the most common renewed restriction around the world.

Dr. Madhukar Pai, of McGill University's School of Population and Public Health, said that masks are an easy and pain-free way of keeping transmission down, but that cheap, at-home tests need to be much more widespread, in both rich and poor countries.

He said both approaches give people a sense of control over their own behavior that is lost with a lockdown and make it easier to accept the need to do things like cancel a party or stay inside.

Pai said requiring boosters universally, as is essentially the case in Israel, Chile and many countries in Europe, including France, will only prolong the pandemic by making it harder to get first doses to the developing world. That raises the odds of still more variants. Lockdowns, he said, should be the very last choice.

"Lockdowns only come up when a system is failing," he said. "We do it when the hospital system is about to collapse. It's a last resort that indicates you have failed to do all the right things."

That's not how lockdowns are seen in communist China, which allows little dissent. At each new outbreak, entire cities are sealed, and sometimes millions of people undergo mass testing. In the strictest lockdowns, people are forbidden to leave their homes, and groceries are brought to their door.

So far, China hasn't seen the need for new restrictions in response to the omicron variant. The head of China's Center for Disease Control's Epidemiology unit, Wu Zunyou, said omicron, for now, poses a manageable threat, and "no matter what variant, our public health measures are effective."

US puts 8,500 troops on alert amid Ukraine tensions with Russia