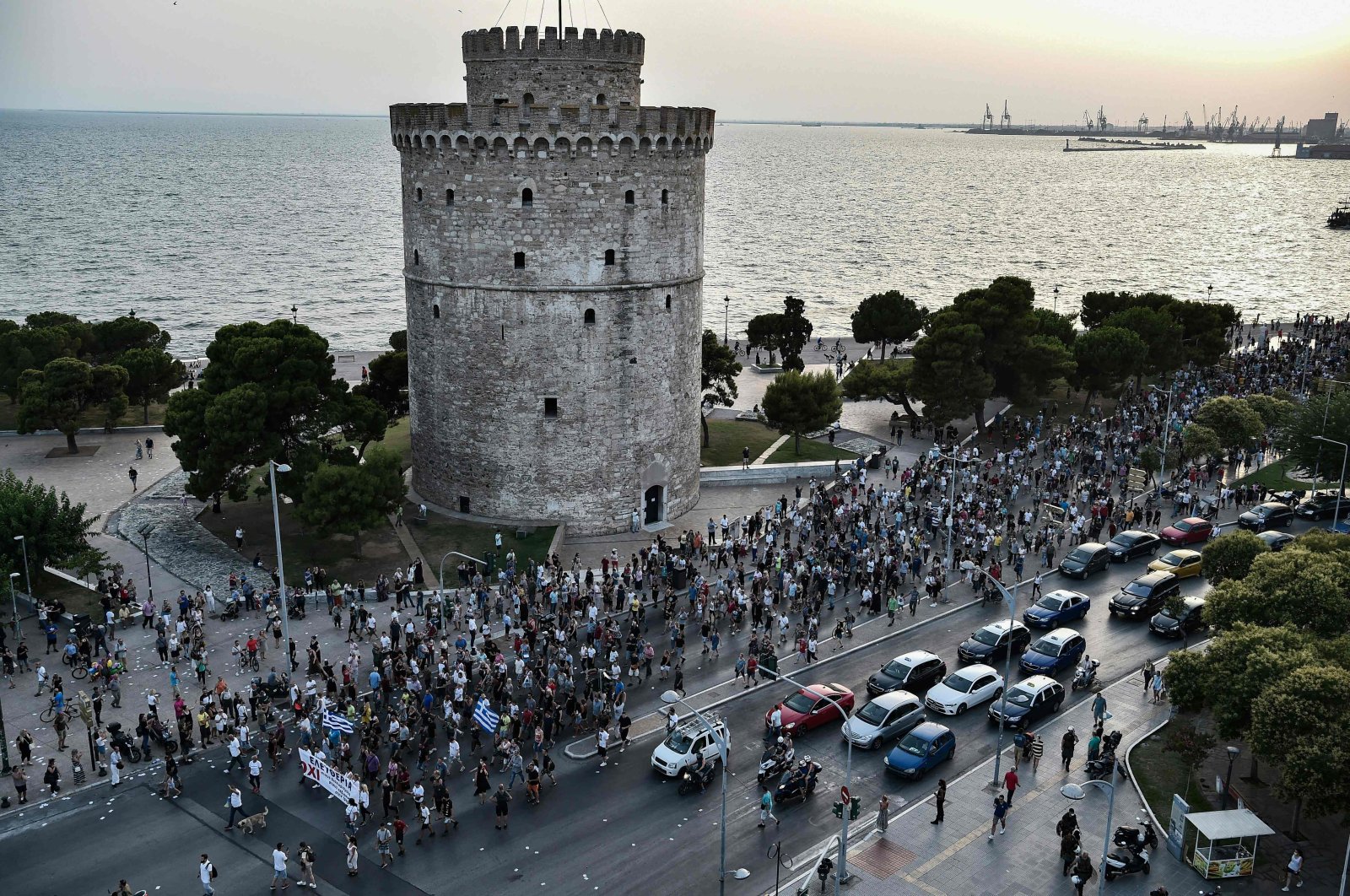 Anti-vaccine protesters taking part in a rally in Thessaloniki two days after the government announced mandatory COVID-19 vaccinations for all health workers, including those working in retirement homes, July 14, 2021. (AFP File Photo)
by Agencies Nov 19, 2021 10:23 am
RECOMMENDED

High COVID-19 infection rates in Greece compared to the rest of Europe and a recent surge in cases prompted Athens to introduce tighter restrictions Thursday on unvaccinated citizens.

Starting Monday, only vaccinated people will be allowed to enter indoor public spaces, such as cinemas, theatres, bars, tavernas, hairdressers and gyms, Prime Minister Kyriakos Mitsotakis said in a speech on state radio.

Greece has so far fully vaccinated about 62% of its population of around 11 million. Authorities had hoped for a rate of about 70% by autumn.

"This is indeed a pandemic of the unvaccinated," Mitsotakis said. "Greece is mourning unnecessary losses because it simply does not have the vaccination rates of other European countries."

Until now, unvaccinated people have been able to go to such venues provided they show a negative coronavirus test result no more than 48 hours old.

Mitsotakis also said that all people aged 60 and older will have to have a third booster shot no later than seven months after the second jab in order for their vaccination certificates to remain valid.

The Greek leader said he would propose making this an EU-wide standard to the European Commission as several other European countries also imposed such restrictions.

Austria, Germany, Slovakia and the Czech Republic all limited public life for the unvaccinated this week as infections rise across Europe.

"Only in this way will we be able to celebrate a better Christmas," he added.

Worshippers attending church will be allowed to enter with a negative test, Mitsotakis said.

Those who are still hesitant to get vaccinated would "think differently if they heard what the unvaccinated who got sick experienced in intensive care units," Mitsotakis said.

In Greece, coronavirus infection rates have risen rapidly. The seven-day incidence currently stands at 439 cases per 100,000 people. Greece reported 7,317 new infections and 63 deaths on Thursday. This brings total infections since the start of the pandemic to 861,117 and the total death toll to 17,075.

The situation put pressure on an already struggling health care system and forced the government to order private sector doctors in five regions in northern Greece to assist public hospitals.

The requisition order, published in the official government gazette on Thursday, is effective for a month.