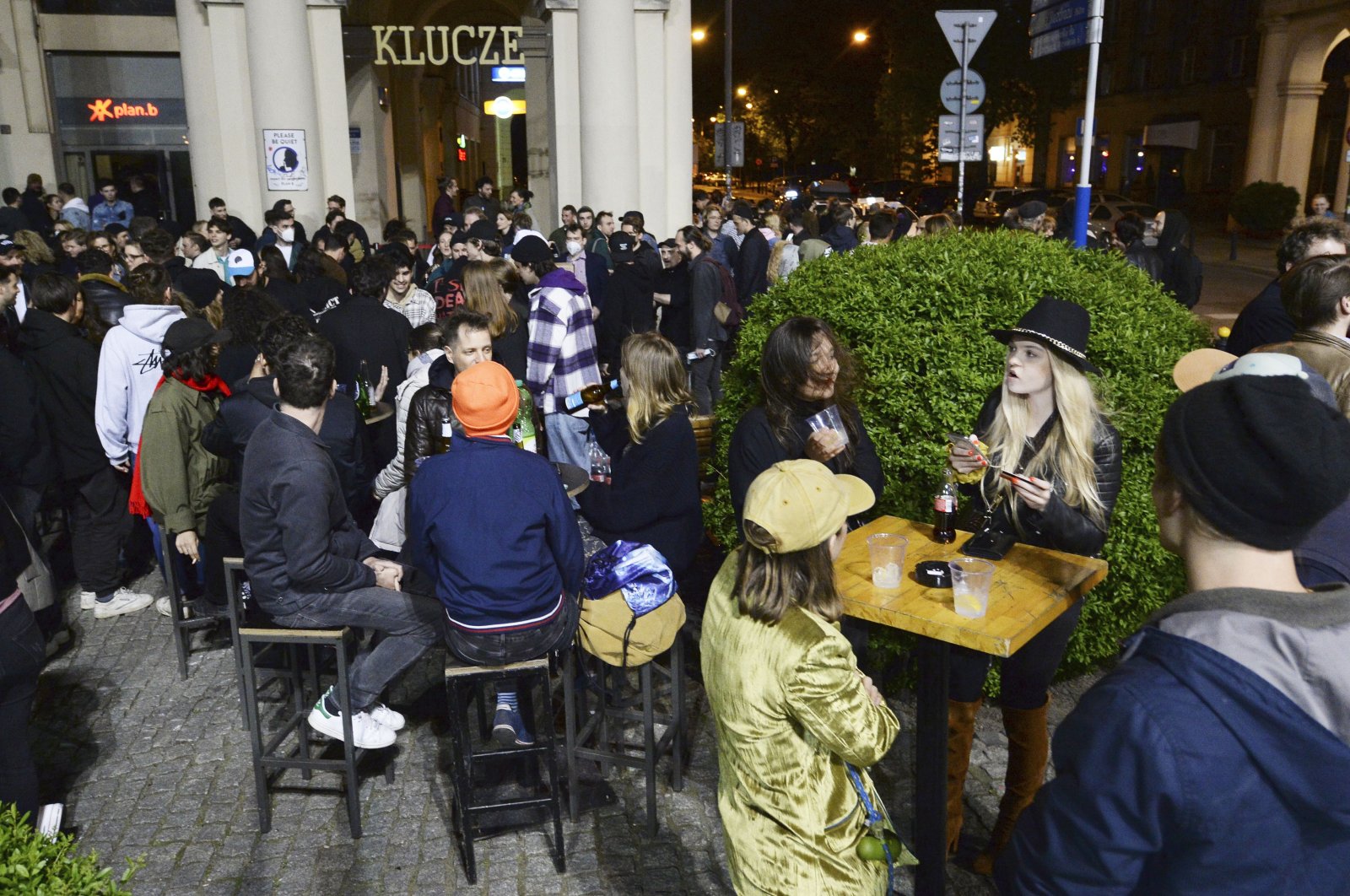 People gather and celebrate as bars, clubs and other establishments reopened in Poland after being closed for seven months, in Warsaw, Poland, May 14, 2021. (AP Photo)
by ASSOCIATED PRESS May 15, 2021 11:07 am
RECOMMENDED

At the stroke of midnight on Saturday, Poland's outdoor bars and restaurants officially reopened for the outdoor consumption of food and drinks for the first time in seven months. Many Poles could not wait for midnight to strike and took to the streets of Warsaw and other cities hours earlier on Friday evening to celebrate, gathering outside popular bars and pulling off their masks, as the government also dropped a requirement for people to cover their faces outdoors.

Some brought their own beer to hold them over until the they could buy drinks at midnight – though some bars were also seen serving up beers and cocktails early.

“Now they are opening and I feel so awesome. You know, you feel like your freedom is back,” said Gabriel Nikilovski, a 38-year-old from Sweden who was having beer at an outdoor table at the Pavilions, a popular courtyard filled with pubs in central Warsaw. “It's like you've been in prison, but you've been in prison at home.”

DJs were finally back at work and waiters and waitresses were rushing to fill orders once again. Meanwhile, the end of a requirement to wear masks outdoors added to the the sense of liberation. Masks will still be required in settings like public transport and stores.

Bar owners were also happy, thanks to the prospect of being able to finally start earning money, and many said they had been bombarded with reservation requests leading up to the opening.

“Today we feel as if it was New Year’s Eve because we are counting down to midnight," said Kasia Szczepanska, co-owner of a popular bar, CAVA, on Warsaw’s trendy Nowy Swiat street. “It's like New Year's in May.”

Pandemic restrictions have meant that restaurants, cafes and other establishments have been limited to offering only takeout food and drinks since last fall.

The easing of the country’s lockdown is coming in stages but the reopening of bars with outdoor gardens or dining areas was clearly a key psychological step on the road back to normality. From May 29, indoor dining will again be allowed. Poland battled a third wave of the coronavirus pandemic back in March, when case numbers surpassed 2 million.

Not all businesses survived the long months of forced closure, however, even with some government assistance, and others will be working at first simply to recoup their losses.

The loosening of restrictions comes as vaccinations have finally picked up speed across the European Union, of which Poland is a member, and the numbers of new COVID-19 infections and hospitalizations have plunged in Poland in recent weeks. Poland also recently offered to buy Johnson & Johnson vaccines from Denmark as the country decided to exclude the jab from its innoculation program, whereas Poland is keen to pick up speed with its vaccination program.

Yet many people don't feel like they can fully relax yet.

Aleksandra Konopka, who manages a bar along a popular promenade on the Vistula River where people were lounging in deck chairs and sipping drinks in the sandy garden with a beach-like vibe, said she was thrilled that things were coming back. But she is also nervous that there could be more lockdowns as new virus variants circulate. And she said there are new challenges coming from the difficulty of finding workers.

“Not everyone is willing to work in the gastronomy or hotel industry because they expect that they will lose their job," Konopka said. “They changed professions and it’s hard to get service.”

One of the customers lounging at her bar, Monika Rzezutka, said she had badly missed contact with people during the many months of lockdown and welcomed the resumption of normal life.

“What used to be the norm suddenly becomes something unbelievable," said Rzezutka, a 23-year-old psychology student. “It’s a nice feeling.”