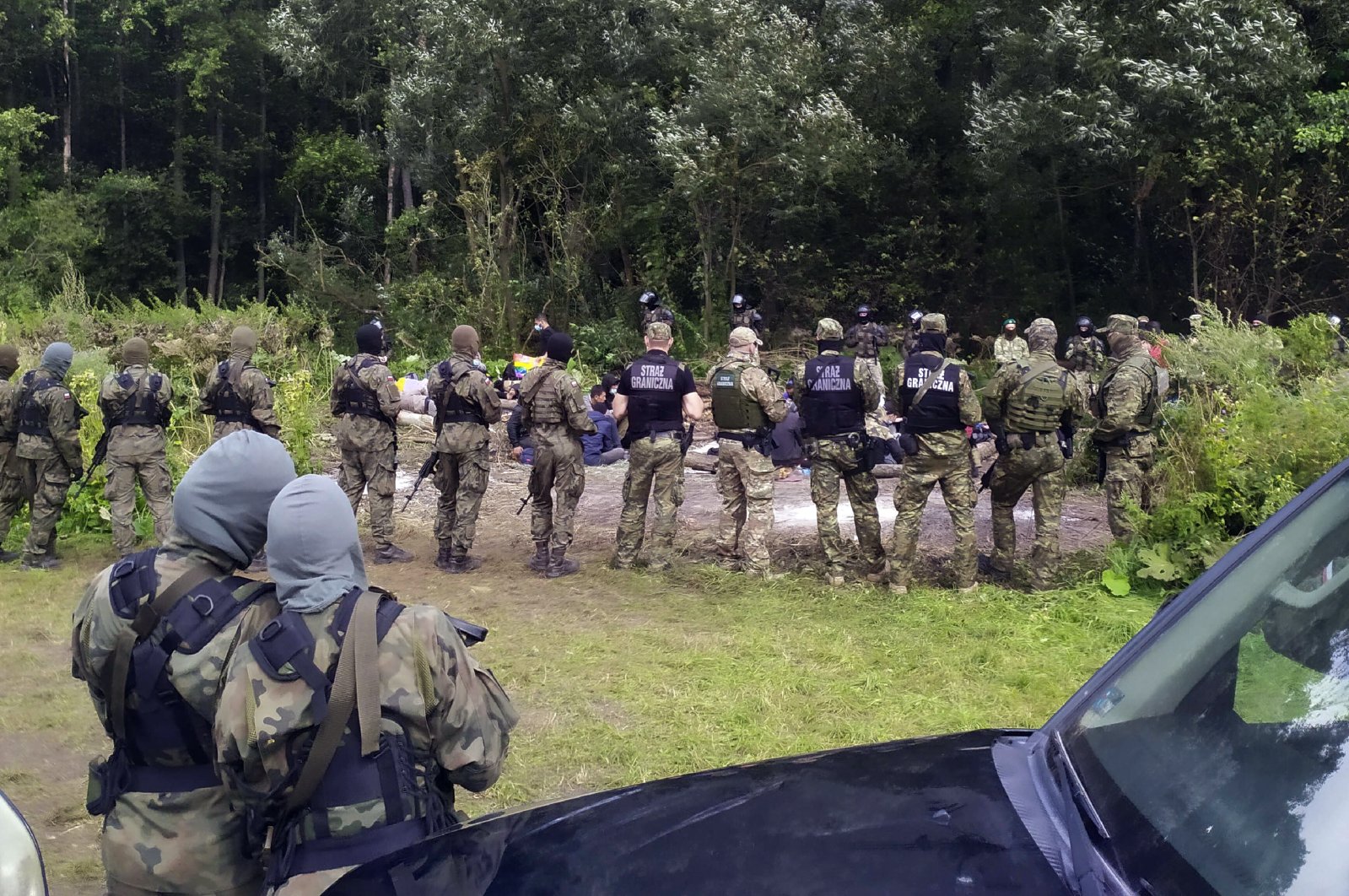 Poland's government asked the president Tuesday to declare a state of emergency along the border with Belarus as it tries to stop migrants from entering from the neighboring country.

The government cited the potential risk from foreign actors and the actions of protesters in Poland as rationales for the declaration. Meanwhile, more than 30 people from Afghanistan have been stuck for more than three weeks between armed Belarusian guards on one side and armed Polish forces on the other.

Some are ill as they have limited access to food and the weather is getting worse, with recent rain and falling temperatures. Poland, a European Union member, has seen a large number of migrants seeking to illegally cross the border in recent weeks, most of them originally from Iraq and Afghanistan.

The Polish government accuses the authoritarian leader of Belarus, President Alexander Lukashenko, of pushing them to Poland to create instability in the EU.

"We have to stop these aggressive hybrid actions, which are carried out according to a script written in Minsk and at the hands of Mr. Lukashenko’s protectors,” Polish Prime Minister Mateusz Morawiecki said at a news conference in Warsaw. Morawiecki's government has asked Polish President Andrzej Duda, an ally, to approve the state of emergency.

Duda has a news conference scheduled for later Tuesday. Interior Minister Mariusz Kaminski, speaking alongside Morawiecki, said a state of emergency would not have much of an effect on the local population but would impose limits on outsiders in an area about 3 kilometers (nearly 2 miles) wide next to the border.

Protesters and human rights activists traveled to the border in recent weeks to try to help a group of Poland-bound migrants who have been stuck in the open air for more than three weeks. Poland insists the group is on Belarusian soil and will not let the migrants approach Polish territory or request asylum.

Activists say there are 32 people from Afghanistan, many of whom are now sick. Marianna Wartecka of the refugee rights group Fundacja Ocalenie said eight of the migrants have kidney problems and five have diarrhea. The sickest person in the group is a 52-year-old woman who traveled from Afghanistan with her five mostly grown children, Wartecka said.

An activist who speaks Dari, one of Afghanistan's official languages, has used a megaphone to communicate with the stranded Afghans, who shout back or gesture answers with their hands. But Polish border guards run sirens and set up vans to interrupt the communication, Wartecka told The Associated Press (AP). She thinks the state of emergency would require the activists to move further away from the border area.

Over the weekend, 13 people from a different activist group, Obywatele RP (Citizens of Poland), were detained for trying to cut a new barbed-wire barrier going up on the border to protest what they called the "inhuman” behavior of Polish authorities.

Kaminski described the behavior of the activists as "scandalous.”

The interior minister also noted that Russian military maneuvers scheduled to begin on Sept. 10 include exercises in Belarus.

"We have to take into account various types of provocations. It is about the safety of our residents,” he said. An interfaith coalition called on Polish authorities Tuesday to give humanitarian aid to the stranded migrants. The coalition, which includes Christian, Jewish and Muslim representatives, said the people stuck at the border "suffer from hunger, cold and indifference.”

"Motivated by feelings of human solidarity, we call on the competent Polish authorities to immediately provide the refugees stranded in the border area with the necessary humanitarian aid: provide them with hot meals, drinks, medicines, and medical assistance,” the Community of Conscience – Coalition of Mutual Respect said in a statement.

Poland has deployed hundreds of soldiers to reinforce border guards and has been installing a tall barbed-wire barrier. Polish border guards said that more than 3,200 people tried to cross illegally into Poland from Belarus in August alone. It said most were from Iraq, followed by Afghanistan, but that some also came from Somalia, Tajikistan and Syria

Other EU nations on Belarus’ border – primarily Lithuania but also Latvia and Estonia – have also faced migration pressure. The four have increased security at their borders, which form part of the EU’s external border.