Protests all over UK, Ireland urge climate action at COP26 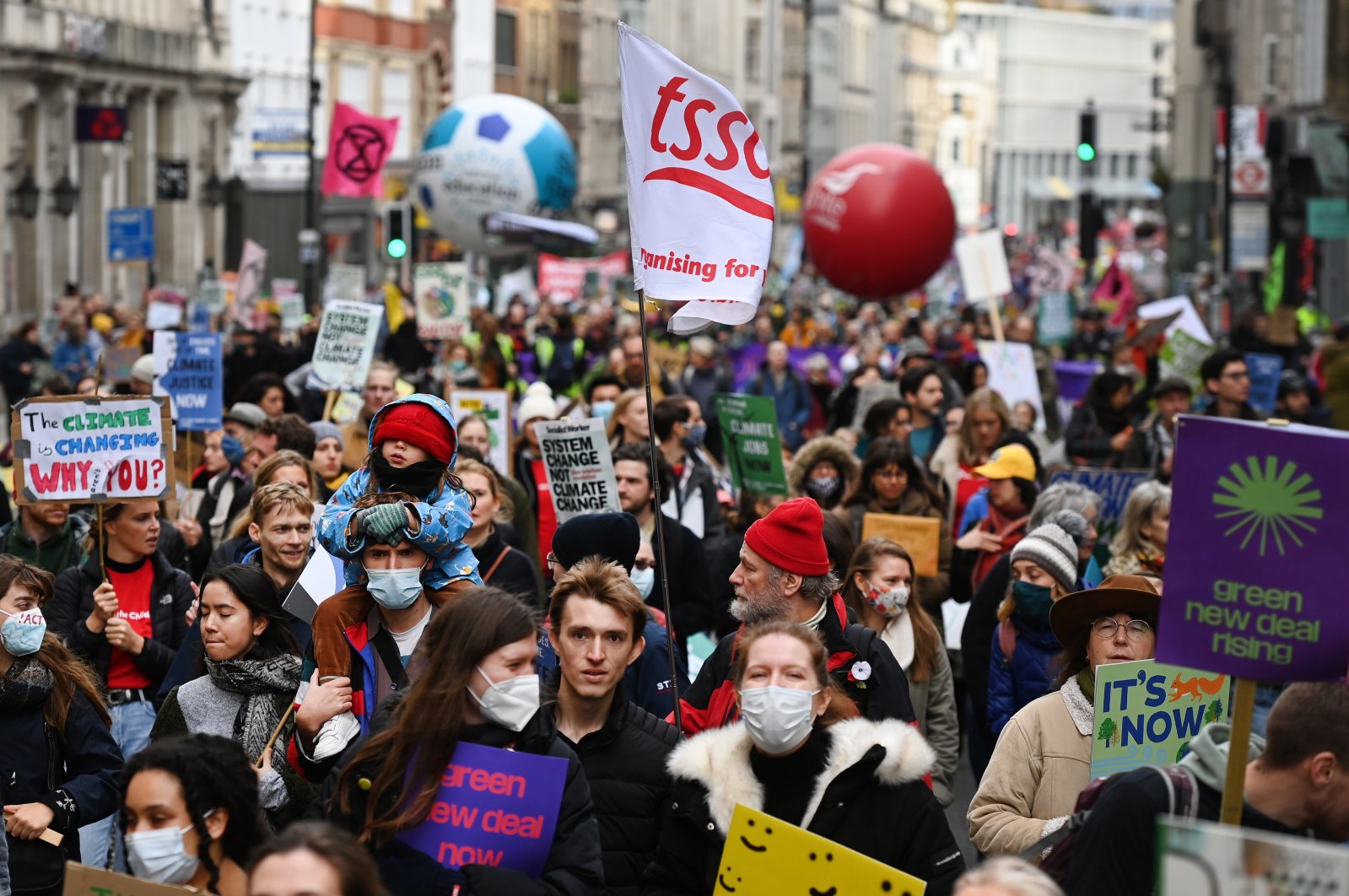 Thousands poured to cities in Britain and Ireland to urge action at crucial COP26 international talks taking place in Glasgow.

Protesters braved pouring rain and winds to march through the Scottish city where the U.N. climate conference is being held, while people in central London and in other cities around Britain and Ireland also stepped out to participate in other marches.

In Glasgow, thousands of climate activists, trade unionists, politicians and other groups were part of thousands of marchers massed in and around Kelvingrove Park ahead of the procession through the city to Glasgow Green, amid a significant police presence and despite forecasts of heavy rain for most of Saturday.

A fire engine, women covered in moss and Poseidon on stilts have all turned out for the protest in Glasgow, while a group of children guided a display featuring what appeared to be a large snake wearing glasses through Kelvingrove Park.

In London, hundreds of protesters gathered at the Bank of England for the start of a march through the city, banging steel drums, chanting "one solution” and waving Extinction Rebellion banners reading "tell the truth."

The protesters were planning to march 2 miles to Trafalgar Square.

Climate protests have also kicked off across the island of Ireland, with hundreds of people gathered at the Garden of Remembrance in Dublin for one of the main demonstrations.

In Northern Ireland, protesters congregated in Belfast ahead of a noisy and colorful march through the city center before a planned rally at City Hall.

In total, some 200 events are taking across the U.K. and around the world, organizers of the COP26 Coalition said.

The marches come after thousands of youth activists, including Greta Thunberg and Vanessa Nakate marched through Glasgow on Friday protesting against investment in fossil fuels and failure to tackle the climate crisis.

Thunberg called the COP26 conference, where countries are meeting in a bid to increase ambition on cutting greenhouse gas emissions, "a global north greenwash festival, a two-week-long celebration of business as usual and blah blah blah."

The latest demonstrations come midway through the COP26 summit, which has seen world leaders gather to set out the action they are taking and commit to curb deforestation, phase out coal, end funding for fossil fuels abroad and cut methane emissions.

But there is still a significant gap between the measures countries have committed to and what is needed to avoid more than 1.5 degrees Celsius (2.7 degrees Fahrenheit) of warming, beyond which the worst floods, droughts, storms and rising seas of climate change will be felt.

Countries are under pressure to agree on a process to increase ambition in the next decade, as well as deliver finance for developing countries to cope with the crisis and finalize the last parts of how the global Paris Agreement on climate change will work.

As the protests take place, negotiations continue at COP26, while the conference is also focusing on the role of nature, land use and agriculture in tackling climate change on Saturday.

Jason Cook, 54, from Wootton Bassett, said he and two friends were marching through Glasgow because they were tired of hearing "blah, blah, blah” from leaders on climate action.

He told the PA news agency: "We don’t want to hear any more blah, blah, blah.”

The three men had come to the march wearing helmets, each adorned with a sign which said "blah,” echoing the description of the COP26 summit by Thunberg.

Dave Knight, 51, from Wiltshire, said the best way to stave off the worst effects of climate change is to end the use and extraction of fossil fuels.

"(There’s been) lots of words, but we really need action – the end of fossil fuels as soon as possible.”

He also said "significantly more investment” was needed in renewables.