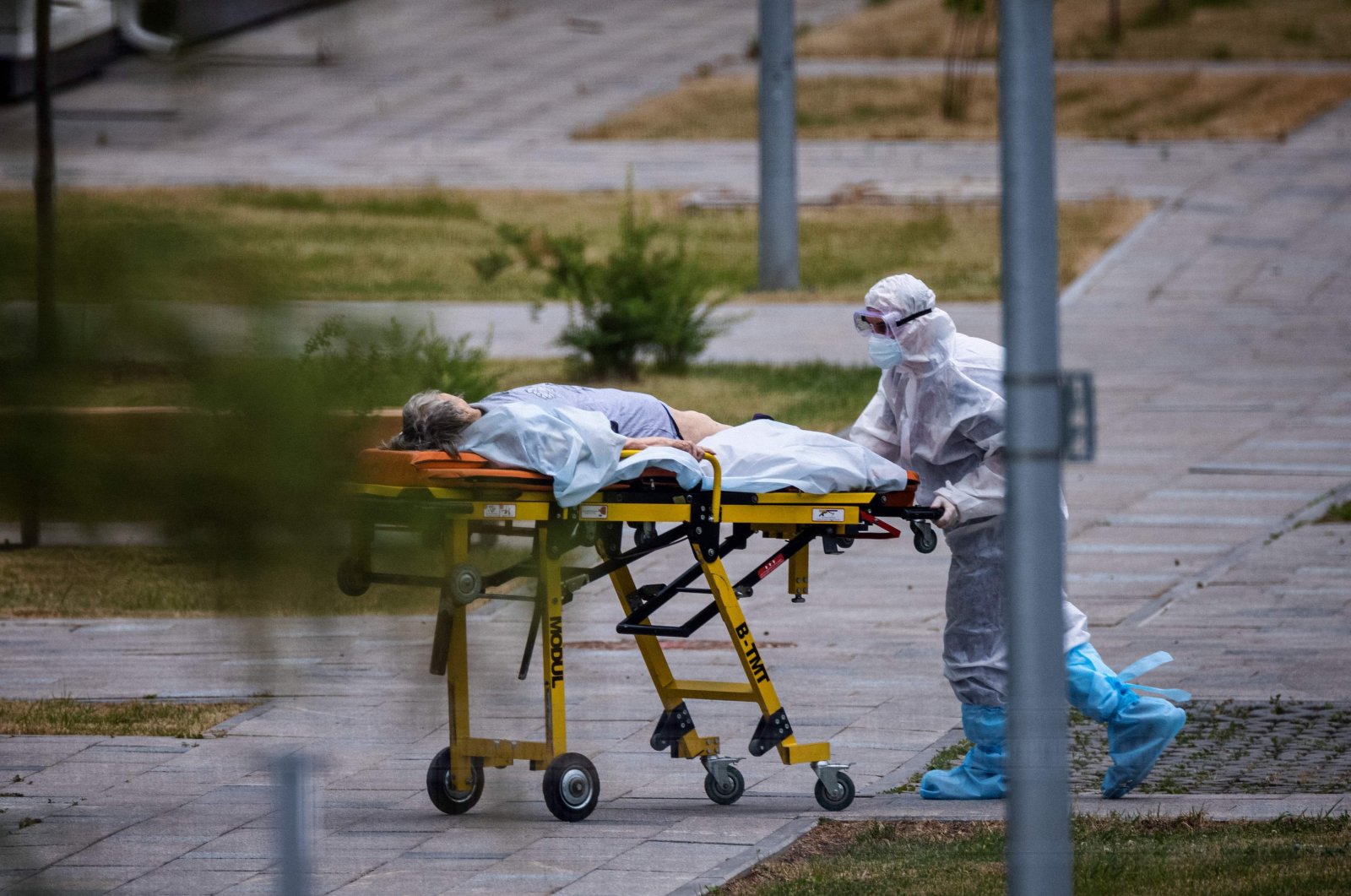 A medic wheels a woman into a hospital where patients infected with the coronavirus are being treated in the settlement of Kommunarka, outside Moscow, Russia, June 30, 2021. (AFP Photo)
by French Press Agency - AFP Jul 04, 2021 2:49 pm
RECOMMENDED

As the highly contagious delta variant spreads worldwide prompting a resurgence of the pandemic, Russia sees a total of more than 25,000 new daily COVID-19 infections Sunday after a week of record death tolls.

The coronavirus has killed nearly 4 million people worldwide, forcing numerous nations to reimpose restrictions well over a year after the outbreak of the pandemic.

Moscow has so far ruled out a new lockdown, but Sunday's 25,142 infections were the biggest figure since Jan. 2.

Record virus deaths were registered five days in a row rising to 697 Saturday, before dropping to 663 for Sunday.

Widespread skepticism and a sluggish rollout has seen only 16% of Russia's 146 million people vaccinated.

President Vladimir Putin is urging Russians to get vaccinated and "listen to experts" rather than rumors.

Asia is on the front line again with Bangladesh's 168 million population under a strict weeklong nationwide lockdown patrolled by police and troops. The city of Khulna, bordering India, has become Bangladesh's virus hot spot in a dire new delta surge with hospitals barely able to cope.

The businessperson brought him to hospital as his condition deteriorated, only to find no bed and no oxygen, he told Agence France-Presse (AFP).

"He passed away gasping for air in the hospital corridor," said Siddik.

Indonesia imposed a partial lockdown Saturday, a day after also reporting more than 25,000 cases and 539 deaths, both new daily records. Mosques, restaurants and shopping malls were shuttered in the capital Jakarta, across the main island of Java and on Bali after the daily caseload quadrupled in less than a month.

The delta variant accounts for more than 80% of new cases in some areas, Indonesia's health ministry has said.

"The stricter restrictions came too late," said Jakarta resident Maya Puspita Sari. "Before, people who got COVID-19 were strangers, but now it's also the people closest to me who are infected ... The virus is getting so much closer and it's terrifying," she said.

The Middle East has not been spared with Iran, fighting the region's deadliest outbreak, warning it could be about to be hit by yet another wave of infections.

"It is feared that we are on the way to a fifth wave throughout the country," President Hassan Rouhani told Iran's antivirus task force, warning the public to be careful as "the delta variant has spread" in southern provinces.

The variant, first identified in India and now present in at least 85 countries, has driven outbreaks in places that had previously been able to escape the pandemic's ravages.

Fiji, which went an entire year without recording any community COVID-19 cases until delta arrived in April, recorded its biggest-ever infection increase Saturday. Authorities reported two deaths and warned of more to come as the virus threatens to overwhelm the South Pacific nation's health system.

Africa has also been largely spared the worst of the pandemic, but infection numbers have increased in the continent for six weeks running, driven by the delta variant. Deaths rose by 15% across 38 African countries to nearly 3,000 in the same period. South Africa, the continent's worst-hit country, posted a new record of 24,000 cases Friday.

"We are indeed ... in the eye of the storm of the third wave," Deputy Health Minister Joe Phaahla said.

In South America, Brazil has suffered more than 500,000 COVID-19 fatalities and thousands took to the streets again Saturday to protest against President Jair Bolsonaro, who faces an investigation over an allegedly corrupt vaccine deal. It was the third day of demonstrations against the government, which is accused of mishandling the pandemic.

Physician Lima Mendes took part in Rio de Janeiro and blamed the government for the high death toll. "This government has killed more than 500,000 people through its spurious decisions, fake news, lies and now this absurd corruption scandal over the vaccines," she told AFP

Rural Vermont has administered at least one vaccine dose to 82% of residents aged 12 and over, well above the national rate of 64% – and more than double that of the worst-performing state Mississippi.