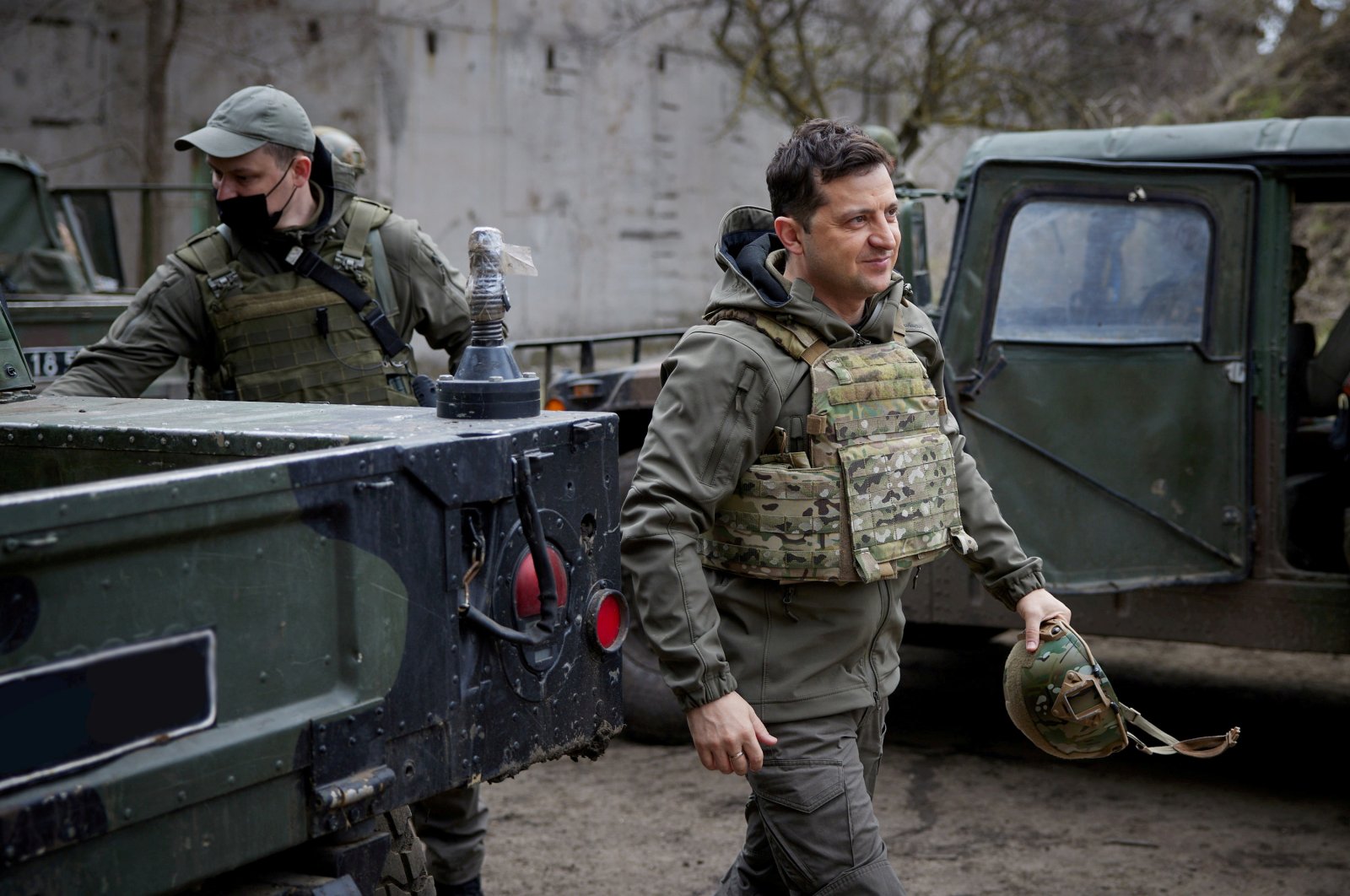 Ukrainian President Volodymyr Zelenskiy invited Russian leader Vladimir Putin to meet in war-torn eastern Ukraine where Moscow has been moving troops in the tens of thousands in recent weeks to assist separatists.

The blunt offer for talks came following a flare-up in clashes between Ukraine's army and pro-Russian separatists controlling two regions in the country's east, raising concerns of a major escalation in the simmering war.

In an address to the nation, Zelenskiy said that Ukrainian and Russian negotiators had recently discussed plans for officials to travel to the front lines of the trench conflict to assess the situation. "I am ready to go even further and invite you to meet in any part of the Ukrainian Donbass where war is ongoing," Zelenskiy said.

The Ukrainian president, elected in 2019 on promises to bring an end to the conflict, accused Russia of participating in peace negotiations while gathering troops on Ukraine's border.

"A considerable number of Russian troops are concentrated near our border," he said. "Officially, Russia calls this military exercises. Unofficially, the whole world calls this blackmail."

"The Russian president once said that if a fight is inevitable, you need to hit first. But every leader needs to understand that a fight must not be inevitable when it... concerns a real war and millions of human lives," Zelenskiy said.

Ukraine, the European Union and the United States have recently sounded the alarm over renewed tensions and accused Russia of massing tens of thousands of military personnel on the northern and eastern borders of the ex-Soviet country.

The EU on Monday estimated the number of Russian troops along the Ukrainian border to be more than 100,000 during talks with Ukraine's foreign minister, who encouraged Western countries to hit Russia with a deeper package of economic sanctions over the conflict.

Kyiv has been battling pro-Russian separatists in the eastern Donetsk and Lugansk regions since 2014, following Moscow's annexation of the Crimean peninsula – a move that plunged Russia's ties with the West to new lows and led to economic penalties.

The conflict, which has claimed more than 13,000 lives, has seen 30 Ukrainian soldiers killed since the start of the year, compared to 50 in all of 2020. The escalation along the front line as well as sharp rhetoric has spurred fresh rounds of talks.

Ukrainian and Russian negotiators met earlier this week and also on Tuesday, although they have so far failed to secure any breakthroughs. Zelenskiy said in his address to the nation that although Ukraine did not want war, it was prepared to fight.

"Will Ukraine defend itself if something happens? Always. Our principle is simple: Ukraine does not start a war first, but Ukraine always stands to the last," he said. On the front line, however, fears were growing of a major escalation, with soldiers set to repel attacks and streets in towns near the front line empty over fears of a return to war.

Yuliya Yevchenko, 27, who lives in a partially destroyed residential building in Krasnogorivka under government control said the sounds of loud shelling could be heard recently in the town just kilometers from the front line.

"We had a truce, and now it is war again," the mother of four said, holding her one-year-old son in her arms. "I don't know what to do. We have nowhere to go at the moment." Faced with the largest deployment of Russian troops on Ukraine's borders since 2014, Zelenskiy has requested help from the West. But some of Ukraine's battle-weary soldiers did not appear optimistic.

"The world says it wants to help Ukraine," Taras, a 24-year-old soldier, told Agence France-Presse (AFP) in the front line village of Mariinka west of the separatist stronghold Donetsk. "But for now, we are fighting against Russia on our own."