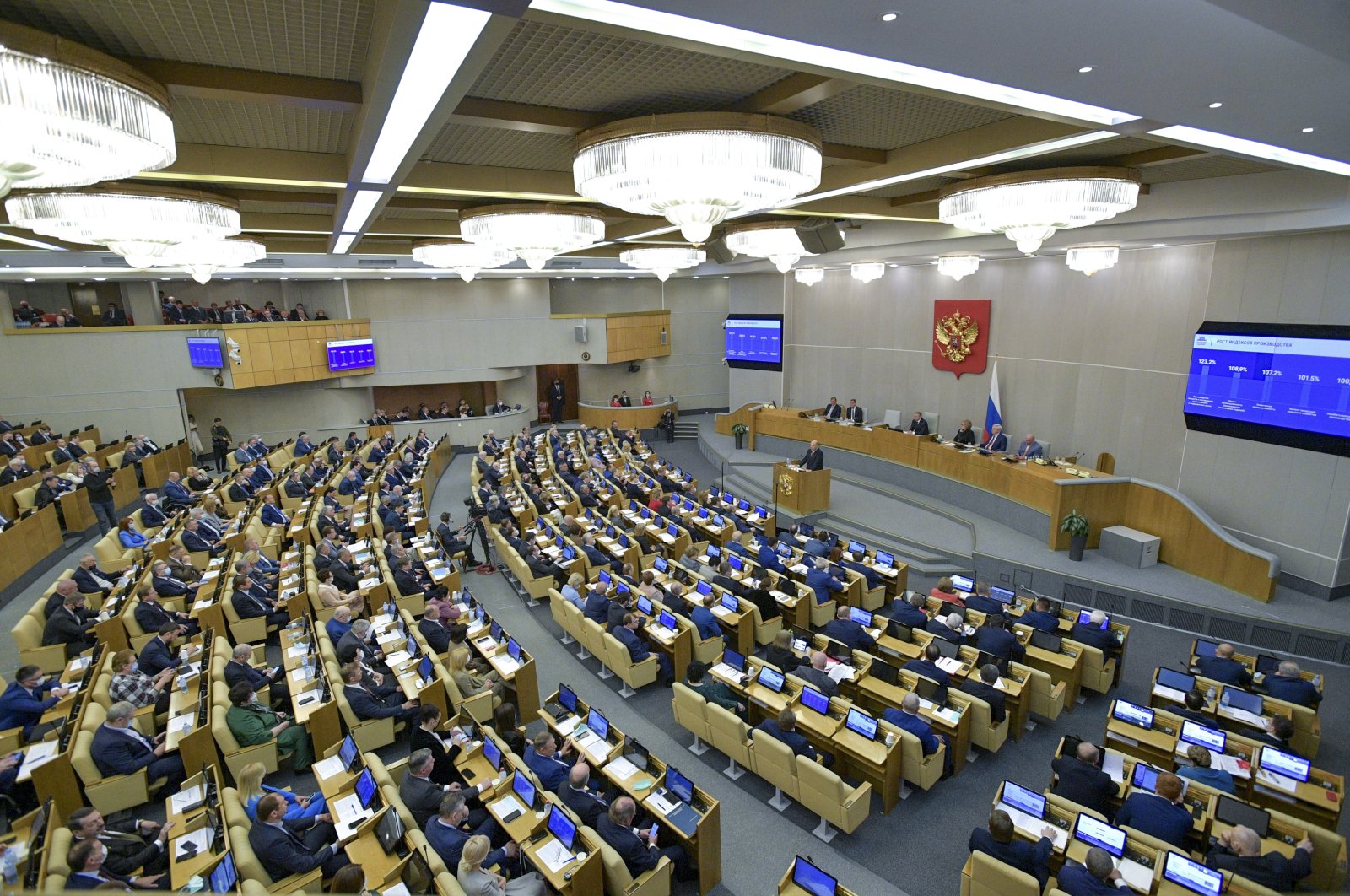 Russian Prime Minister Mikhail Mishustin, foreground on a podium, speaks at the State Duma, the Lower House of the Russian Parliament, with an annual report on the country's economic and social development, in Moscow, Russia, Wednesday, May 12, 2021. (AP Photo)
by French Press Agency - AFP May 18, 2021 5:50 pm
RECOMMENDED

The vote in the lower house State Duma is part of broader efforts by Russian authorities to snuff out the activities of Navalny, who is serving two-and-a-half years in a penal colony outside Moscow on old fraud charges he says are politically motivated. It comes alongside a trial beginning in June to decide whether to add Navalny's network of regional offices and his Anti-Corruption Foundation (FBK) to a list of "terrorist and extremist" organizations.

Russia is also due to hold parliamentary elections in September, in which the deeply unpopular ruling United Russia party is expected to struggle. The legislation debated Tuesday will bar leaders of extremist groups from standing in parliament elections for five years, said lawmaker Vasily Piskaryov.

He said it would also block members of the groups and other people involved in their work – including those who helped finance them – for three years. Deputies voted 293 in favor of the bill to 45 against with two abstaining.

The draft legislation would affect not only senior members and activists of Navalny's political network but tens of thousands of Russians who supported its work with donations. It will go through two more readings in the lower house. In steps that are considered formalities, the legislation will then need to be approved by the upper house Federation Council before President Vladimir Putin signs it into law.

Prosecutors in April requested that Navalny's regional network and the FBK be given the extremist designation, accusing them of plotting to stage a Western-backed uprising in Russia. Russia's list of extremist organizations includes the Daesh group and Al-Qaida. The federal financial monitoring service Rosfinmonitoring in April already added Navalny's political network to its database of banned organizations. The group disbanded to shield its members and supporters from possible prosecution.

The designation would mean Navalny's groups are banned from operating in Russia and participating in their activities could result in lengthy prison terms. The FBK routinely publishes investigations into alleged graft by officials at all levels of government. Its most notable probes were YouTube reports showing sprawling luxury properties allegedly belonging to Putin and former president and prime minister Dmitry Medvedev. The reports helped spur mass anti-government protests.

The organization's nationwide network of regional offices helped organize Navalny's Smart Voting elections strategy, which calls for voters to cast their ballots for the candidate most likely to defeat Kremlin-linked opponents. The group's members routinely face police searches and arrests for their activism, with the pressure ballooning since Navalny returned to Russia in January from Germany where he had been recovering from a poisoning attack.

Most of his top allies have since been placed under house arrest or left the country, with several announcing publicly that they were quitting the FBK after prosecutors requested the extremism tag.