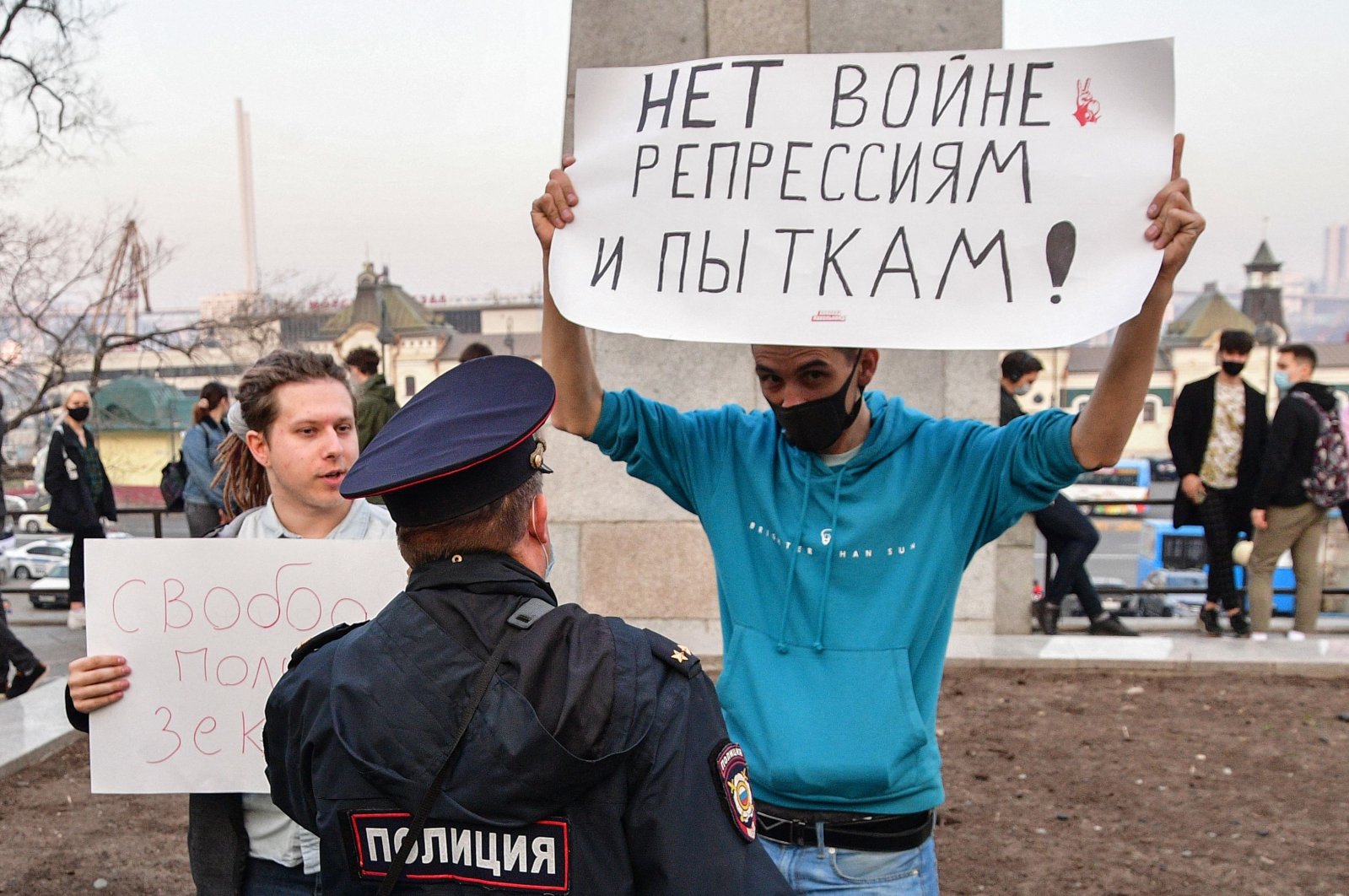 A Russian police officer speaks with an opposition supporter holding a poster reading "No war, repressions and tortures!" during a rally in support of jailed Kremlin critic Alexei Navalny in Vladivostok, Russia, April 21, 2021. (AFP Photo)
by REUTERS Apr 21, 2021 3:22 pm
RECOMMENDED

Lyubov Sobol, one of the faces of Navalny's popular YouTube channel, and Kira Yarmysh, his spokesperson, were both detained in Moscow.

Navalny, Russia's leading opposition politician and a thorn in Putin's side for the past decade, is gravely ill in prison after a three-week hunger strike. His team has urged people across the vast country to take to the streets on Wednesday to demand life-saving medical treatment for him. The government has said the planned gatherings are illegal. Previous pro-Navalny rallies have been dispersed by force, with thousands of arrests.

Police detained at least 10 opposition activists in several Russian regions ahead of the protests, according to the OVD-Info monitoring group. Police raided the apartments of Navalny supporters in St. Petersburg, Krasnoyarsk and Yekaterinburg. A journalist's apartment was also raided in St. Petersburg.

"As usual, they think that if they isolate the 'leaders' there won't be any protest," said Leonid Volkov, a close Navalny associate. "Of course that's wrong."

Another Navalny aide, Ruslan Shaveddinov, tweeted: "Right now across the whole of Russia they are detaining potential protesters. This is repression. This cannot be accepted. We need to fight this darkness."

The 44-year-old, who survived a nerve agent poisoning last year that Russia denies carrying out, was sentenced in February to 2 and a half years for parole violations related to an embezzlement case that he says was politically motivated. He went on a hunger strike on March 31 over what he said was the refusal of prison authorities to provide him with adequate treatment for acute leg and back pain.

Navalny's team has said protests will be held in more than 100 cities and towns, including the Moscow square near the Manezh exhibition hall where Putin will give his address.

Meanwhile, Putin warned Russia's foreign rivals against "crossing the red line" with Moscow, as he gave a state of the nation speech amid deep tensions with the West.

Russia's ties with the West have deteriorated to near Cold War lows, with Moscow and Western capitals at loggerheads over Navalny, a Russian troop build-up on Ukraine's borders and a series of espionage scandals.

"In some countries, they have started an obscene custom of blaming Russia for anything," Putin told gathered lawmakers and regional governors in a speech broadcast on national television. "It's some kind of sport, a new kind of sport."

The Russian president added that Moscow wants "good relations" with all members of the international community – even with those with which it does not see eye to eye.

"But if someone perceives our good intentions as weakness ... let them know that Russia's response will be asymmetric and harsh," he said. "I hope that no one will think of crossing the red line in relation to Russia. And where it will be – we will determine that ourselves."

Moscow has seen its diplomats in recent months expelled from a host of Western countries, which have imposed sanctions on Russia over allegations of cyber attacks, hacking and the poisoning of Navalny.

The Kremlin last week said it was "good" that U.S. President Joe Biden was seeking dialogue with Putin by offering a summit between the two leaders, even as Washington slapped Moscow with new sanctions. It has said, however, it is still considering the offer.